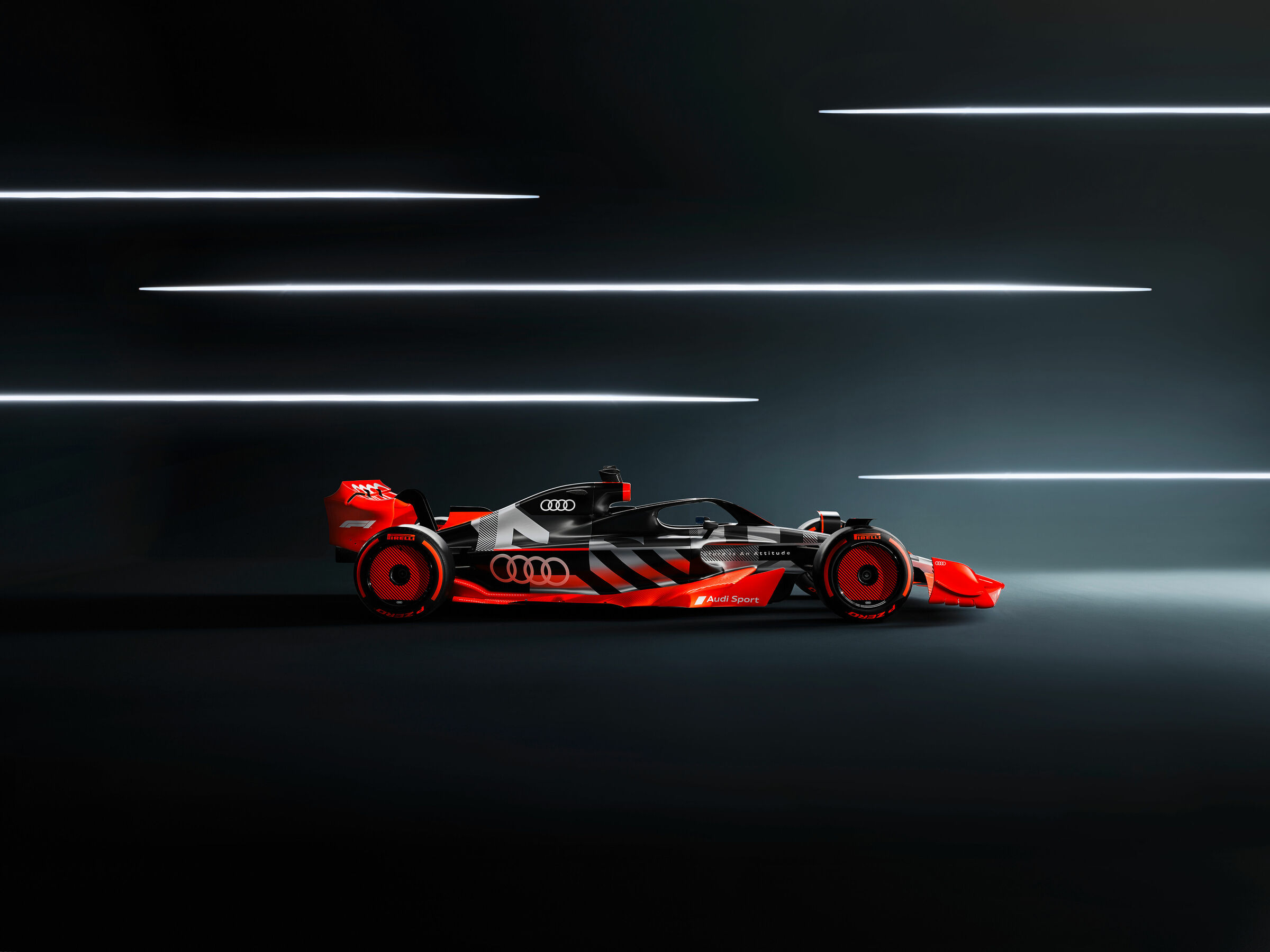 Audi is promoting sustainable product development and wants to establish more and more cycles. Together with partners from science and industry, the company with the four rings is researching ways of improving material recyclability and saving primary materials. In collaboration with the Fraunhofer Institute, the manufacturer is now testing an additional method of recycling plastics and making them usable for mass production. As part of Audi Environmental Week, Audi employees will be focusing on recycling and many other ideas for a more sustainable company. This is the campaign’s second year and it is intended to promote networking, exchange, and interdisciplinary cooperation with the aim of improving Audi’s sustainability performance.
Read on
09/21/22
Motorsport

Audi Sport prepared for the first rally of the new Audi RS Q e-tron E2 at an extensive test in Morocco in September 2022. With Mattias Ekström/Emil Bergkvist, Stéphane Peterhansel/Edouard Boulanger and Carlos Sainz/Lucas Cruz, all six drivers and co-drivers got to know and appreciate the second evolution stage in tough conditions.
Read on
09/15/22
Company

Manfred Döss appointed Chairman of the Supervisory Board of AUDI AG

Audi is consistently driving the hybrid working world of the future within the company. On October 1, 2022, the company agreement "Hybrid Working" will come into force at the Ingolstadt and Neckarsulm sites. The company agreement provides for an even higher degree of flexibility for employees. They are free to choose their place of work and there is no requirement for fixed days in the office. The expansion of desk sharing, the redesign of office space and financially supporting employees in ergonomically working remotely are making remote and on-site work even more compatible.
Read on
09/06/22
Company

Visions of the future in Manchester: Audi brings young talents to the One Young World Summit

New ideas for a better world: The One Young World Summit, held in Manchester from September 5 to 8, will bring together more than 2,000 young people to discuss the societal challenges of our time. The program of this year’s conference is characterized by a wide variety of topics for a world worth living in. Audi will also be part of the event. The company, along with Bentley and the Audi Environmental Foundation, is sending a total of 29 employees and scholarship holders from all over the world to England’s northwest – with groundbreaking projects in tow. Xavier Ros, Member of the Board of Management for Human Resources and Organization at AUDI AG, sees recognizing and promoting sustainable innovations by young pioneers as a fundamental task of our time and part of Audi’s DNA.
Read on
09/01/22
Motorsport

In March 2022, the Audi RS Q e-tron won its first desert rally in Abu Dhabi, and now the next evolution is ready. The innovative prototype presents itself significantly improved for the 2022 Morocco Rally and the 2023 Dakar Rally. The body is completely new and features significantly enhanced aerodynamics. It helps lower the prototype’s weight and center of gravity. New operating strategies further improve the efficiency of the electric drivetrain. In the interior and when changing wheels, the driver and co-driver benefit from easier operation. Following these evolutions, the RS Q e-tron now bears the abbreviation E2. It is reminiscent of the legendary Audi Sport quattro in its final development stage for Group B rallying in the 1980s.
Read on
07/29/22
Company

The Audi Group is presenting a solid balance sheet for the first half of 2022. Due to the ongoing semiconductor crisis and COVID-19-related lockdowns in China, Audi could not meet the high demand for its core brand vehicles. Despite this, the Audi Group’s revenues increased by two percent to €29.9 billion, and its operating profit reached a new high of €4.9 billion. At 16.5%, the operating margin was well above the previous year and above the strategic target corridor of 9 to 11%. Earnings were driven by the good price position, the solid operating performance of the Lamborghini and Bentley luxury brands, and support from raw material hedging. The Audi Group confirms its forecast for deliveries, revenue, and returns.
Read on
07/28/22
Company

Audi Progressive Retail: The brand with the four rings launches a new interactive concept for customers

Even more than before, Audi is putting customers front and center at its dealerships: with a completely new, inviting, and progressive showroom architecture, interactive digital elements, and employees to spark enthusiasm for new technologies. The Audi Progressive Retail concept provides space for customers to experience Audi products and the Audi brand in an emotional and individual way, while at the same time reflecting the brand with the four ring’s forward-looking mentality.
Read on
07/21/22
Company

Winfried Kretschmann, Minister-President of the German state of Baden-Württemberg, visits Audi’s Neckarsulm location and personally exchanges ideas about the transformation of the auto industry and the Neckarsulm location with Audi CEO Markus Duesmann for the first time. During a tour of the factory, Kretschmann witnessed production of the fully electric Audi e-tron GT quattro in the Böllinger Höfe. Afterwards, the Minister-President spoke with the Audi Chief Executive about the company’s strategy – and what general conditions need to be established in order to design the mobility of the future.
Read on
06/29/22
Company

With the foundation of the Audi FAW NEV Company, Audi has set the course for made-in-China production of models based on the PPE (Premium Platform Electric) technology platform for the Chinese market. Work has now begun on the new production site in the northern Chinese metropolis of Changchun. With construction set to finish by the end of 2024, this will be the first automotive plant in China where only all-electric Audi models roll off the line. The factory is designed to produce more than 150,000 vehicles a year. All site processes will be networked, with Audi’s “Mission Zero” environmental program setting the guardrails for sustainable production.
Read on
06/23/22
Company

Audi Summer Concerts: All ticket sales to be donated to help Ukraine

AUDI AG has successfully hosted the Audi Summer Concerts music festival since 1990. For the last two years, they could only be experienced virtually due to the pandemic. Now, they’re once again able to be enjoyed live. And this time, they’re dedicated to an important cause – taking a clear stance for the victims of the war in Ukraine.
Read on
All Press Releases

09/22/22
Audi MediaCenter
Hybrid work at Audi
There’s no going back to yesterday’s workplace: for Audi, hybrid working models are an essential component of the company culture. The company agreement “Hybrid Working,” which will take effect at the Ingolstadt and Neckarsulm sites starting on October 1, 2022, is setting a new standard in the Audi workplace. The company agreement envisions maximum flexibility, self-determination, and personal responsibility for employees. To a great extent, Audi staff can freely choose their workplace and alternate between working from home and on-site, to the extent that the nature of their work permits. Audi will support them with equipment packages for the home office and by reorganizing the space at the plant to make their work more productive and their time there more pleasant. Teams set their own rules and are not constrained by rigid guidelines imposed from above. Desk sharing in the office and more flexible working conditions in production are also part of the concept. Audi’s company agreement “Hybrid Working” builds on its “Mobile Working” company agreement, which had been in effect since 2016. It was developed as part of the Better Normal project, which Audi has used to foster modern working models and a culture of trust and personal responsibility.
07/27/22
Models
20th anniversary Audi RS 6
For 20 years, one vehicle has inspired Audi Sport GmbH and a worldwide fan community like no other: The Audi RS 6 has been shaping the field of high-performance station wagons with impressive performance and outstanding everyday usability for four generations. The successful basic concept from 2002 is based on a twin-turbocharged power unit and all-wheel drive. The basic concept is the same across all RS 6 generations. Even in the competitive environment, the RS 6 continues to make its mark and set new standards.
07/26/22
Audi MediaCenter
TechDay Smart Production
From modular assembly as a response to increasing product variety, to virtual assembly planning for the resource-efficient design of infrastructure or the local server solution Edge Cloud 4 Production that is a paradigm shift in factory automation: Audi is building a fully networked, highly efficient, and sustainable way of production that uses new technologies and concepts to successfully meet the demands of the future. In doing so, Audi is looking at manufacturing as a whole - from the individual employee to the fully automated production cycle.
06/18/22
Company
SocAIty study: Autonomous Driving in the Field of Tension Between Technological Progress & Social Acceptance
The &Audi SocAIty study addresses the mobility of the future or, more precisely, the opportunities and challenges posed by autonomous driving. The intent behind the study is to make a decisive contribution to the public debate surrounding current issues relating to autonomous driving and the responsible use of new technologies in mobility. After all, it only takes a brief look at the current discourse on autonomous driving to realize the vital role it plays in many social issues. Yet on the one hand, it seems that society is not yet ready for such a major technological advance and much of the debate seems driven by fear. On the other, real-life labs and testing facilities are bringing the technology closer and closer to the very heart of our society every day. Simultaneously, the international legal situation is currently undergoing rapid developments. Equally, while sometimes seen as an obstacle to progress, issues of data protection are repeatedly raised for debate in the general discourse. Topics are discussed to much controversy and questions repeatedly raised for which there are, as yet, no clear answers. The present study addresses these questions and in doing so aims to answer open questions about the use of new technologies in mobility and their influence on people’s lives.
All Press Kits

The latest episode of Inside Dakar provides a behind-the-scenes look at the continuing development of the Audi RS Q e-tron E2 – this time from the test in the Moroccan desert.
09/19/22
Motorsport

Starting in 2026 Audi will be competing in the FIA Formula 1 World Championship with a specially developed power unit and now presents the first images of its Showcar with Audi F1 launch livery.
08/26/22
Motorsport

Audi has already started the Formula 1 project in their state of the art motorsport centre at Neuburg, Germany.
Audi MediaTV

The latest Audi-Videos in 4k, world premieres and Audi-events on livestream.