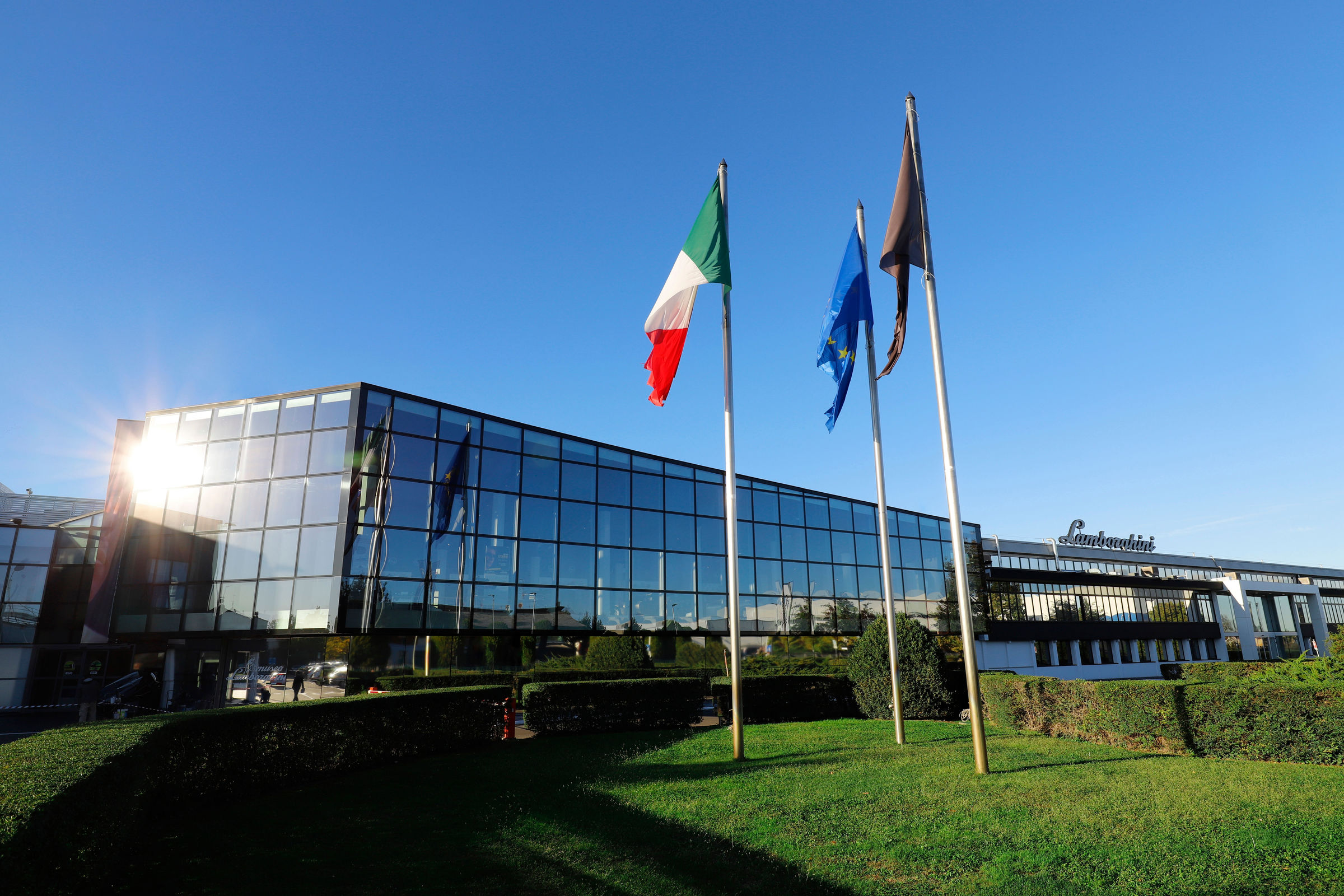 Automobili Lamborghini S.p.A. is known for innovative, dynamic and highly passionate luxury Super Sports Cars and the first Super SUV in history. Since 1998, the Italian brand, headquartered in Sant’Agata Bolognese in Northern Italy, is part of the Audi Group.

The Company
The “Terra di Motori,” the “Land of Engines” in the Emilia-Romagna region in northern Italy, is a region of high technology by tradition; no other part of the world is so strongly influenced by a passion for fascinating high-powered engines. Sant’Agata Bolognese, around 25 km (15.5 miles) north of Bologna, has been the home of Lamborghini ever since the company was founded by Ferruccio Lamborghini in 1963.

Today, 1,750 employees work at the brand’s headquarters in Sant’Agata Bolognese where the two super sports cars Aventador and Huracán, as well as the Super SUV Urus are currently produced on three assembly lines. More than 700 assembly line workers, technicians and highly qualified specialists have been hired since 2014.

The new Urus also resulted in a substantial increase in the dimension of company’s production site, expanding it from 80,000 m2 to 160,000 m2. The new production facility houses a new assembly line dedicated to Urus, the new finishing department for all Lamborghini models, and a new office building with LEED Platinum certification: the highest standard in the world for energy and environmental certification in building design and construction. The project was achieved with focus on Lamborghini’s commitment to environmental sustainability: the entire production facility in Sant’Agata Bolognese maintains the carbon neutral certification obtained in 2015.

Historical and Contemporary Models
The twelve-cylinder engine, a crowning achievement of engine design, is inseparably associated with the brand. Already the first Lamborghini model, the 350 GT, drove off the assembly line with a V12 that was highly innovative at its time. In the company’s first years, this engine with its 3.5 liters of displacement and 280 hp constituted the foundation for continual increases in power and more advanced development.

Looking back on the past 50 years, one model stands out of a whole range of icons created by Lamborghini – the Miura. Built from 1966 to 1972 it was the first Lamborghini to bear a name from the world of bullfighting. The two-seater was one of the most powerful cars of its time with up to 283 kW (385 hp) in the late SV version. Its ultra-flat body concealed innovative technology – a transversely mounted V12 that made the Miura the first street legal mid-engine super sports car of modern imprint. In 2016, Automobili Lamborghini celebrated the 50th anniversary of the Lamborghini Miura with special initiatives dedicated to its customers and fans, as well as the Aventador Miura Homage, a special edition of the Aventador Coupé that pays tribute to the Miura.

The successor to the Miura was even more extreme – the Countach was in the product line-up from 1974 to 1990. Its styling was based on the strict use of wedge-shaped lines and the longitudinally mounted V12 mid-engine proved to be timeless. In the Diablo, which followed the Countach, large sections of the body were made of carbon fiber reinforced polymer (CFRP) for the first time – a high-end material in which the brand has continually built up competence starting from the mid 1980’s right up to today. The Diablo VT of 1992 was the first Lamborghini to offer all-wheel drive, which is now a standard feature of all Lamborghini models. In the V12 series, the Diablo was followed by the Murciélago in 2001 and the Reventón was presented in 2007 in an exclusive limited series.

The Lamborghini Aventador, successor of the Murciélago, made its debut in 2011, and at the beginning of 2013 the brand introduced the open-top version Aventador Roadster. A key component of its technology package is the light CFRP monocoque, made in-house with the characteristic scissor doors. Its drive unit is an extremely high-revving and torque-strong naturally aspirated V12 engine with 6.5 liters of displacement and 515 kW (700 hp) of power. The cylinder deactivation system (CDS) and the innovative Stop & Start system with high-performance capacitors, known as supercaps, enhance its efficiency.

The Veneno, the exclusive model from the 2013 International Geneva Motor Show utilizes CFRP high-end material. It was sold exclusively in three units as coupé version. With its 552 kW (750 hp) of power and excellent aerodynamic efficiency, this Lamborghini is a race car for the street. At the end of 2013 the Roadster Version was presented in Abu Dhabi on board the Italian aircraft carrier Cavour as the excellence of Italian car industry and sold in nine units.

At the Geneva Motor Show 2016 Automobili Lamborghini presented the Centenario, in the year the company celebrates the centenary of founder Ferruccio Lamborghini’s birth. Only 20 Coupé and 20 Roadster versions of the Centenario were produced and all 40 cars were already sold at its presentation, at a start price of 1.75 million euros plus tax. Using the V12 architecture the Centenario continues Lamborghini’s one-off strategy and demonstrates Lamborghini’s innovative design and engineering competencies.

Current Product Range
The Aventador S, which succeeds the Aventador, boasts a new aerodynamic design, a redesigned suspension system, greater power and a completely reinvented driving dynamic. “S” is the suffix used for the improved versions of pre-existing Lamborghini models and it sets the new standard for the V12 Lamborghini Aventador. Presented in December 2016, the Lamborghini Aventador S sports a 6.5-liter, V12-cylinder naturally aspirated engine with an output of 40 HP more than the previous model, for a maximum power output of 740 hp. It leaps from 0 to 100 km/h in 2.9 seconds and can reach a top speed of 350 km/h. Since September 2017 its open version, the Aventador S Roadster, is adding a new dimension in driving enjoyment. And the Aventador SVJ, presented in August 2018, set a new record for production cars on the famous Nürburgring-Nordschleife, completing the 20.6 km lap in just 6:44.97 minutes. The Aventador SVJ Roadster has been presented at the Geneva Motorshow 2019.

The Lamborghini Huracán, presented at the Geneva Motor Show in 2014, is the successor of the Gallardo. With its pure design, breathtaking performance and an excellent level of quality, the Huracán guarantees an extraordinary dynamic experience. With a power/weight ratio of just 2.33 kilograms per HP, the V10 model is capable of challenging performance. Maximum speed is over 325 km/h and it accelerates from 0 to 100 km/h in 3.2 seconds and from 0 to 200 km/h in 9.9 seconds.

The Huracán range consists of Coupé and Spyder versions, both available with all-wheel-drive or rear-wheel drive. The Huracán Performante was presented at the Geneva Motor Show 2017. Combining new lightweight technologies, active aerodynamics with aero vectoring and a new set-up of chassis, all-wheel-drive system and further improved powertrain, the Performante set many new lap records on international race tracks and is still under the top five production car record holders on the Nürburgring Nordschleife.

In 2019, the new Huracán EVO has been introduced, featuring a new design with new aerodynamics and the V10 engine from the Huracán Performante. It is the first Lamborghini with predictive logic on vehicle dynamics control: Lamborghini Dinamica Veicolo Attiva (LDVI). The Spyder version of the Huracán EVO has been presented at Geneva Motor Show in 2019.

In November 2017, Lamborghini, in collaboration with two laboratories of the Massachusetts Institute of Technology in Boston, gave an outlook onto a possible future Lamborghini electric super sports car. The concept car, Lamborghini Terzo Millennio, physically imagines design and technology theories of tomorrow, while sustaining the visual intrigue, breath-taking performance and emotion found in every dimension of a Lamborghini.

The world premiere of the Super SUV Urus in December 2017, and its market introduction starting from summer 2018, marked a new era in the 55-year history of the brand. The Urus is the third model in Lamborghini’s product range, creating a new niche in the luxury segment with benchmarking power, performance and driving dynamics, unparalleled design, luxury and daily usability. Delivering additional growth and significant opportunities across the marque, it also determined a substantial increase in the production capacity of the factory. Over the lifecycle of the new vehicle Lamborghini invests hundreds of millions of Euros and hired more than 700 new employees since 2014. 1,761 units of the Urus have been delivered to customers in 2018 since its market introduction in July 2018.

Lamborghini is a global brand and sales volumes are well distributed among the three major regions. All regions set a new sales benchmark in 2018 and contributed to the total sales growth compared to the previous year. EMEA (Europe, Middle East, Africa): 2,497/+69%, America: 1,952/+46% and Asia Pacific: 1,301/+30%.

Both super sports car model lines achieved record sales, thus contributing to the overall growth. Sales of the V12 Lamborghini Aventador, born in 2011, continue to be strong and grew by 3% from 1,173 to 1,209 units. Even stronger was the sales increase of the V10 Lamborghini Huracán, growing by 5% from 2,642 to 2,780 units. As expected, a substantial contribution to the global sales increase came from the Super SUV Urus, with 1,761 units delivered to customers since its market introduction in July 2018.

Lamborghini Ad Personam
Ad Personam is the company's customization program, which enables each customer to create his or her unique Lamborghini. This is possible either at the dealerships worldwide or in the Ad Personam Studio located in the heart of the company's production facility in Sant’Agata Bolognese. Ad Personam began in 2006 and was expanded in 2013 with the creation of a dedicated team consisting of representatives from the company's principal departments. The goal of the Ad Personam group of specialists is to provide a tailored consulting service that aids each customer in choosing colors, materials, trim and accessories, which meet the stylistic criteria of the Lamborghini marque and are consistent with its stringent quality and safety standards. In 2017 more than 50% of all Lamborghini super sports cars delivered were customized by Ad Personam, a percentage that has steadily grown over the past years.

In 2018 Lamborghini Squadra Corse also set a new benchmark, with over two hundred racing Huracáns produced to date. Lamborghini Squadra Corse is one of the few motorsport departments in the world which manufactures its own racing cars on the same production line as the road car, inside the factory in Sant’Agata Bolognese. Both the Huracán Super Trofeo and the Huracán GT3 share the same production line as standard Lamborghini Huracán cars.

During the 2018 World Finals in November, Lamborghini Squadra Corse unveiled the Urus ST-X Concept, the first racing version in the brand’s history of a Super SUV. The vision is a car conceived for an innovative single-marque championship that will combine race circuit and off-road track.

In the same occasione Lamborghini also presented the SC18 Alston. The one-off V12 model was developed by Lamborghini Squadra Corse in conjunction with the customer, with aerodynamics derived from experience in Lamborghini Super Trofeo and GT3 racing. It is made for track-oriented use and with exclusive racing features.

*Fuel consumption and CO2 emissions figures given in ranges depending on the tires/wheels used.