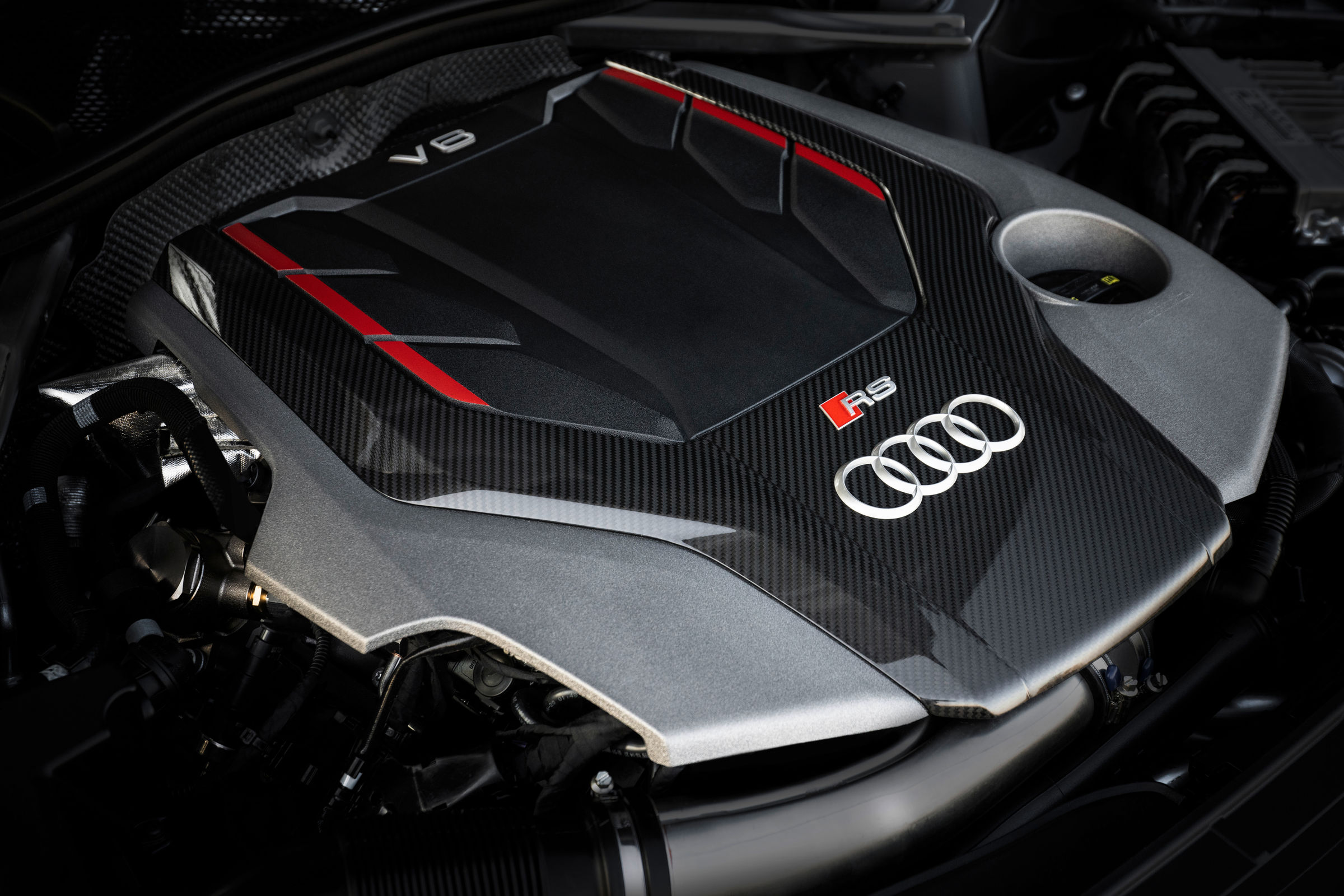 Each of the two turbochargers on the 2.9 TFSI is assigned to a cylinder bank and can build up a maximum of 1.5 bar of charge pressure (relative). The chargers sit in the 90-degree angle of the cylinder banks; the exhaust side of the engine is therefore on the inside and the intake side is on the outside. This layout enables compact construction and short gas flow paths with minimal flow losses – the engine responds extremely spontaneously to movement of the accelerator pedal.

An important factor for the efficiency of the strong six-cylinder engine is the TFSI combustion process with the B-cycle designation, which is designed specially for the partial load range. Essentially, the procedure is comparable with what is known as the Miller cycle. However, in the classic Miller cycle, the reduced cylinder charge is disadvantageous to torque and power output. Audi has neutralized these effects by implementing turbocharging and the two-stage Audi valvelift system (AVS). The core characteristic of the combustion process is an unusually short opening time during intake in partial-load. The intake valves of the V6 TFSI already close at a crank angle of 130 degrees – well before the pistons reach bottom dead center (BDC). This and increased pressure in the induction manifold reduce throttle losses. The amount of inducted fresh air remains relatively small; accordingly, the compression phase begins later when the piston travels upward after the BDC point. This allows a high geometric compression ratio; the combustion takes place in a relatively small combustion volume. Compared to the short compression phase, the expansion phase is lengthened significantly. The result is greater engine work output at the same fuel consumption, which significantly boosts efficiency. At higher load and engine speeds, the AVS of the V6 TFSI closes the intake valves later – the opening time is increased to 200 degrees crank angle in the 2.9 TFSI. Simultaneously, valve lift increases from 6.0 to 10 millimeters (from 0.2 to 0.4 in). The cylinder charge also increases considerably – the engine revs up powerfully and delivers an impressive output.

A further efficiency component of the 2.9 TFSI is the thermal management system. The crankcase and the cylinder head have separate coolant circuits with controls that are independent of each other. Both circuits are closed after the cold start. This leads to a quick warm-up of the cylinder head and crankcase. The exhaust manifolds that are integrated into the cylinder head are rinsed with coolant. When the engine is warm, this technology lowers the exhaust temperature – consumption drops, especially when driving in a sporty way. The great efficiency of the V6 twin-turbo is also partly to do with low friction. For example, the fully adjustable oil pump only builds up as much pressure as necessary.

The chain drive uses a new concept to reduce the drive power required: The crankshaft drives the balancer shaft via gears, with the shaft lying far down in the V of the cylinder banks. From here, chains run to the four camshaft sprockets. These are trioval in shape, i.e. they have a slightly triangular shape, in order to compensate for peak forces. The balancer shaft rotates on roller bearings with particularly low levels of friction.

The V6 twin-turbo sends its torques to a spontaneously and quickly shifting eight-speed tiptronic. Drivers can choose between the D and S modes or shift gears manually using the enlarged aluminum shift paddles on the steering wheel. The dynamic starting function controls starts with optimum traction and maximum acceleration.

Consistent traction, unshakable stability, and high dynamic handling under all conditions – 40 years ago, Audi put the legendary original quattro onto the road and thus started the major success story of permanent all-wheel drive. Like all Audi RS models, the revised RS 5 Coupé** and Sportback** have the quattro drive train on board as standard. In normal driving operation, its center differential distributes forces slightly more toward the rear – 40% end up on the front axle and 60% on the rear axle. If slip occurs at one axle, most of the torque is rapidly redirected to the other axle – up to 70% to the front or up to 85% to the rear axle.

The wheel-selective torque control, a function of the Electronic Stabilization control (ESC), perfects the work of the quattro drive. When cornering fast, it applies precisely calculated brake interventions at the wheels on the inside of the curve before they begin to spin. The difference in propulsive forces causes the car to turn very easily into the curve, for the benefit of agility, precision, and stability.

Even more dynamism and neutrality are provided by the sport differential, which is tuned specifically for the RS. When driving in a sporty way, it distributes the torques actively between the rear wheels; for this purpose, it uses two superposition gears, which are activated via the multi-plate clutches. When steering or accelerating, it pushes it primarily onto the wheel on the outside of the curve; as a result, it positively pushes the car into the curve. The sport differential is just as effective in overrun mode as it is under load. It is controlled electronically within a few hundredths of a second. Based on the steering angle, yaw angle, lateral acceleration, speed, and other information, the control unit rapidly and repeatedly calculates the ideal distribution of the forces for each driving situation.

* Information on fuel consumption and CO2 emissions as well as efficiency classes in ranges depending on the tires and alloy wheel rims used.
** The fuel consumption values of all models named and available on the German market can be found in the list provided at the end of this press information.