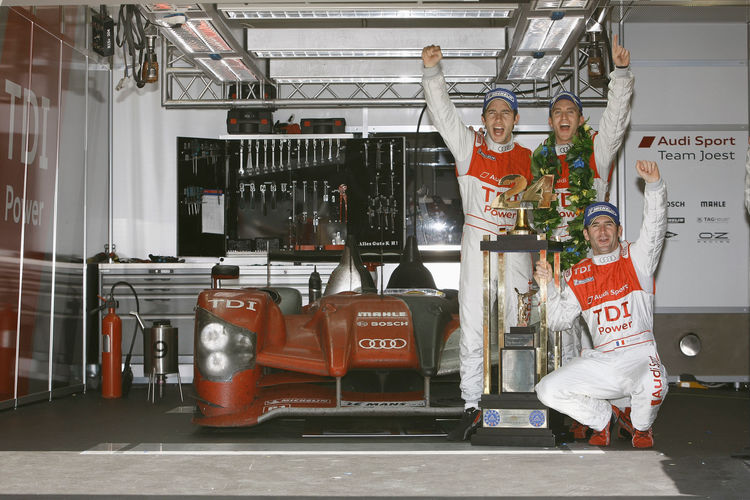 In the fastest race in Le Mans history Audi achieved its ninth triumph. Key facts on the historic Le Mans exploit of the brand with the four rings.

With its ninth victory Audi has equalized Ferrari in the roll of honor of the endurance classic which has been held since 1923. Only Porsche with 16 wins (in 60 events) is even more successful. In total, 24 different marques are on the list of winners.

With 39 entrants since 1999, Audi achieved 31 finishes (79.5 percent), nine of which were victories, five were second places and nine were third places.

For the team of Reinhold Joest this was the eleventh victory at the Le Mans 24 Hours and the seventh with Audi. If the exploits by Dauer Racing (1994) and Bentley (2003), in which the team was involved as well, are included in the count, Joest Racing has recorded as many as 13 Le Mans successes.

In all of its twelve Le Mans commitments Audi achieved a podium result.

For the brand with the four rings this was the fourth one-two-three exploit after 2000, 2002 and 2004. For the first time an automobile manufacturer managed to clinch a one-two-three win with diesel-powered cars at Le Mans.

If Bentley’s 2003 exploit when a TFSI engine developed by Audi Sport was used is included in the tally, then highly efficient Audi technology has been victorious in ten of the last eleven Le Mans races. For all ten successes Audi Head of Motorsport Dr. Wolfgang Ullrich has been responsible.

For the fifth consecutive time a diesel-powered vehicle won at Le Mans. Four diesel victories are credited to Audi’s TDI technology (2006 to 2008 and 2010).

After 2001 (TFSI) and 2006 (TDI) Audi won at Le Mans with new technology for the third time: in 2010 turbo-chargers with VTG (Variable Turbine Geometry) were used.

Despite the extremely high average speed the winning car consumed just 43.43 liters per 100 kilometers of diesel fuel on average – more than 10 percent less as at Audi’s first Le Mans victory in 2000 when the average was just 208.660 km/h.

The winning car completed the entire distance with only eleven sets of Michelin tires (including an additional set required due to a slow puncture shortly before the end of the race). This meant that on average 491.9 kilometers were driven on a single set of tires. In 2009 the tires had to been changed about every 330 kilometers – a clear sign for the high efficency of the “R15 plus.”

In total, the victorious Audi R15 TDI pitted 33 times. The pit stop time was just barely 20 minutes. The replacement of the right-hand outside mirror (approx. 20 seconds) was the only unscheduled work, plus an additional tire change as a result of a slow puncture just before the end of the race.

At an average age of 29, Timo Bernhard (29), Romain Dumas (32) and Mike Rockenfeller (26) were the youngest driver trio to have clinched an Audi victory at Le Mans.

At 26, Mike Rockenfeller is the youngest Audi driver to have the Le Mans 24 Hours.

Tom Kristensen in his 14th race at Le Mans clinched his eleventh podium position – eight of which were victories (record) and three were third places.

Mike Rockenfeller is the first driver since 1988 (Jan Lammers) to have won the 24-hour races at Daytona and Le Mans in the same year.

In total, this was the 27th Le Mans victory for a German brand and the 51st for an open-top vehicle.

It was only the third time in the history of the race that a vehicle with a V10 engine won.

After Frank Biela (1999), Marco Werner (2002) and Christijan Albers (2009), Oliver Jarvis was the fourth Audi driver to be awarded the “Rookie of the year” title for the fastest qualifying time set by all Le Mans rookies.

For Audi’s tire partner Michelin this was the 19th Le Mans victory and the 13th consecutive one since 1998.

For the second time in a row (just the fifth since 1923 in total) the car designated as number “9” won at Le Mans.