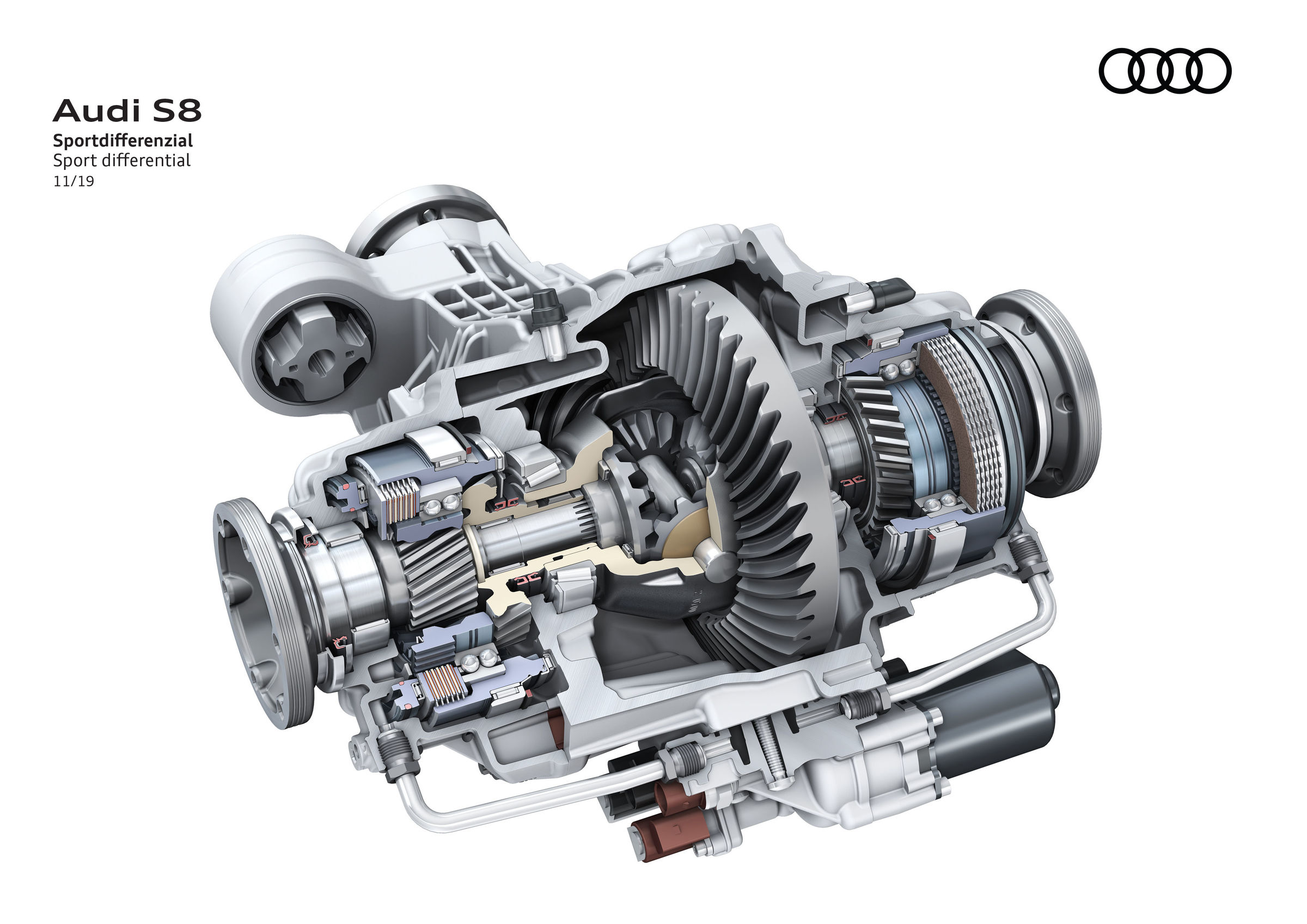 Throughout its model range, Audi offers a very wide variety of car concepts – and quattro technology is equally multifaceted. One thing that all versions do share is the way the system works in concert with wheel-selective torque control – a software function of Electronic Stabilization Control (ESC). During dynamic cornering, it applies the brakes very gently to the unloaded wheels on the inside of the curve before they have the chance to slip. This input makes the handling neutral, dynamic and stable.

The Audi models with longitudinal front-mounted engines and tiptronic automatic transmissions employ the classic quattro drive system with a self-locking center differential, which operates by purely mechanical means and therefore without any delay whatsoever. It is configured as a planetary gear. This involves an internal gear encompassing a sun gear, with cylindrical planet gears, joined to the rotating housing, turning between them. In regular driving operation, 60% of the drive torque flows to the rear axle via the internal gear, which has a larger diameter, and its associated output shaft. The remaining 40% goes to the front axle via the smaller sun gear. This asymmetric, dynamic torque distribution results in sporty, rear-biased handling. If the wheels on one axis lose traction, the shape of the gearwheels and helical gearing in the differential produce axial forces. These forces act on friction discs to produce a locking effect that diverts the bulk of the drive torque to the wheels with the better traction. Up to 70% can be directed to the front wheels and up to 85% to the rear.

quattro with highly efficient ultra technology is designed for Audi models featuring a longitudinal front-mounted engine working with a manual transmission or the S tronic dual-clutch transmission. In the case of a moderate driving style, only the front wheels are driven for reasons of efficiency. The all-wheel drive system is ready to spring into action immediately when needed. In fact, it is usually activated predictively. During fast cornering, the control unit will detect that the front inside wheel is about to reach the limit of grip around half a second before it actually happens. There are no differences in terms of traction and handling compared with permanent quattro drive systems.

The concept with two clutches in the drivetrain gives quattro with ultra technology a key efficiency advantage over the competition. When the system changes to front-wheel drive, the front clutch – a multi-plate clutch at the transmission output – disconnects the propshaft. A decoupling clutch also opens in the rear differential. It shuts down the rotating components that cause the most drag losses here, such as the large crown wheel running in the oil bath.

Torque vectoring at the rear axle: the sport differential

The sport differential is available for the particularly powerful and sporty Audi models with tiptronic. This improves handling, traction and stability by distributing drive torque ideally between the rear left and right wheels in all operating states. During turning or acceleration, torque vectoring literally presses the car into the curve without producing any understeer. At the same time, the system stabilizes the vehicle by shifting drive torque to the wheel on the inside of the curve whenever necessary.

In addition to the functions covered by a conventional differential, the sport differential has a transmission stage and hydraulic multi-plate clutch fed by an oil pump. During fast cornering, the clutch engages for the outside wheel, which has better grip, thereby seamlessly directing the higher speed of the transmission stage to that wheel. The extra torque required is taken from the opposite wheel via the differential, which means that almost all the torque goes to the wheel on the outside of the curve.

Hydraulic multi-plate clutches: the quattro drive system for transverse engines and in the Audi R8

The compact models with transverse engine configurations use a quattro drivetrain centered on an electronically controlled hydraulic multi-plate clutch. It is mounted at the end of the propshaft before the rear differential to optimize weight distribution. Inside it is a package of metal friction rings mounted in pairs one behind the other. One ring of each pair is permanently meshed with the clutch basket, which rotates with the propshaft. The other ring of each pair is connected to the short shaft leading to the rear differential.

The all-wheel drive control unit constantly calculates the best torque distribution between the front and rear axles based on extensive data. When the requirements change, the electric axial piston pump builds up as much as 40 bar of hydraulic pressure within just a few milliseconds. It presses the friction plates together, which enables variable transmission of the drive torque from the front axle to the rear.

On the especially sporty models with transverse engine layouts, clutch management is designed to focus on dynamics, with more frequent and pronounced rearward torque distribution. In sport mode, or when ESC is disabled, management permits controlled drifts on road surfaces with low grip. When the car is driven with a more restrained style, the clutch can be disengaged entirely on some models to boost efficiency.

In second-generation versions of the R8 high-performance sports car (since 2015), Audi has fitted the electrohydraulic multi-plate clutch in a special drive layout. Behind the V10 mid-mounted engine is a compact seven-speed S tronic along with a locking differential to drive the rear wheels. One of its output shafts is linked to the propshaft that runs to the front-axle drive. The water-cooled multi-plate clutch, which distributes the necessary torque to the front wheels in any driving situation, is integrated within this. There is no fixed basic distribution; in extreme cases, up to 100% can be transmitted to the front or rear axle.