Intuitive and high-resolution: Operation and Displays 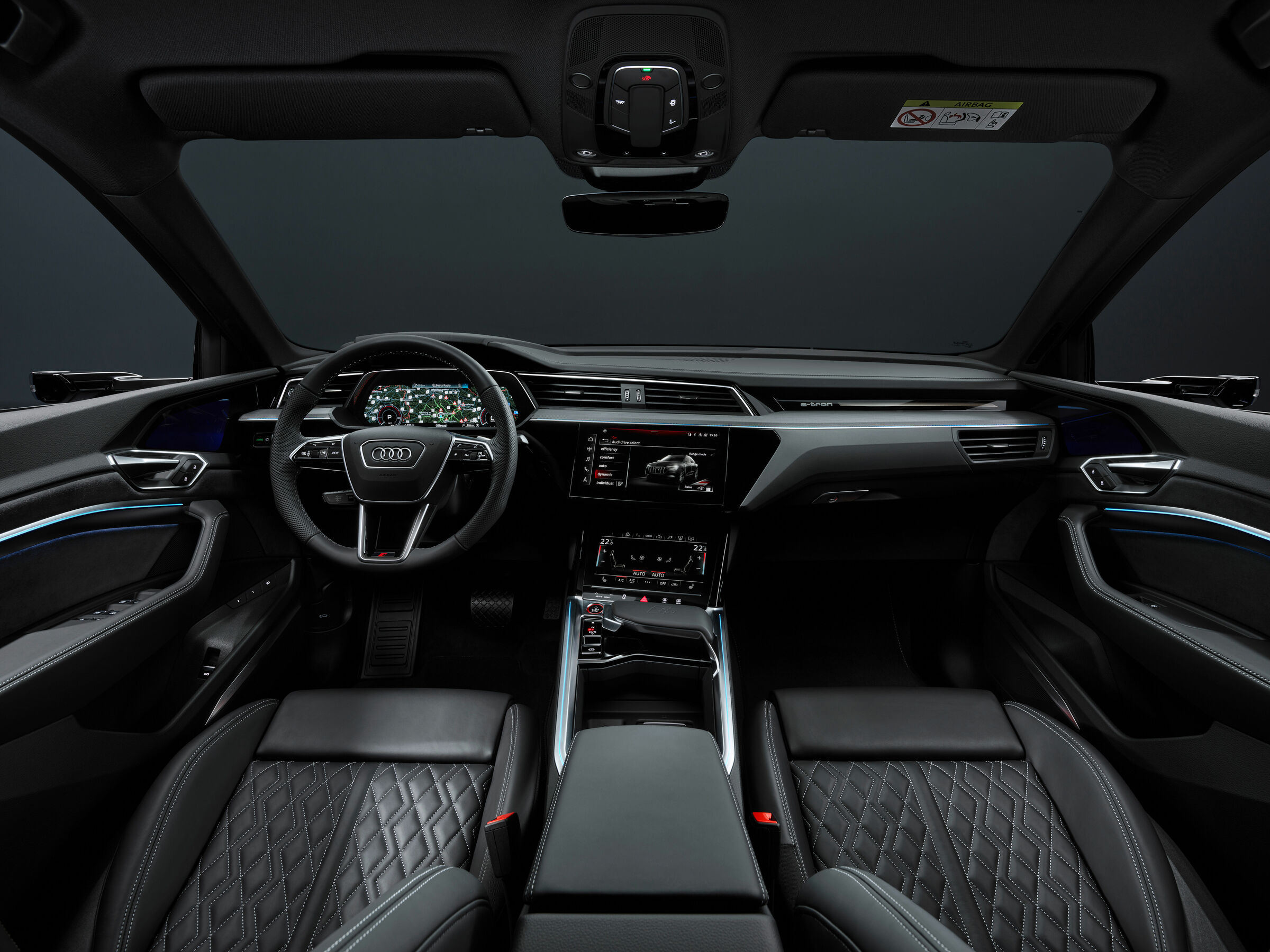 The Audi Q8 e-tron features a fully digital display and operating concept as standard. With its two MMI touch response displays, it offers a control logic similar to smartphones – the system gives haptic and acoustic feedback if desired and the model’s virtual exterior mirrors open the digital operating window even further. Audi pioneered this technology and was the first manufacturer to offer virtual exterior mirrors in a mass-produced model.

Automatic adaptation to any driving situation

The virtual exterior mirrors are more than just a new technology experience – they also optimize comfort and safety. Incorporated into the hexagonal end of their flat supports is a small camera, whose digitally processed images are displayed on OLED displays in the transition between the instrument panel and door with a resolution of 1280 x 1080 pixel and are harmoniously integrated into the wrap-around that envelopes the cockpit. The 7-inch displays automatically control the brightness and respond even before the driver’s finger touches the display; if the driver moves their finger toward the surface, symbols are activated with which the driver can reposition the image. A switching function allows the driver to also adjust the virtual passenger-side mirror.

Thanks to their sophisticated image processing, the displays provide a significantly better image than a conventional mirror in certain situations e.g. direct sunlight. The mirrors adjust automatically to three driving situations: highway, turning, and parking. On highways, the field of vision is reduced so that the driver can better estimate speeds when driving fast – other vehicles then appear larger in the display. If the driver signals an intention to turn or change lanes with the turn signal, the turn signal view enlarges the image on the relevant side, making the blind spot smaller. When maneuvering and parking, the field of view displayed extends downward. The display visualizes turn signals as a green outline on the outer frame and displays information from the lane change assist, Audi side assist, and the exit warning and a heating function protects the camera from fogging and freezing.

Like all luxury-class models from Audi, the Q8 e-tron also uses the MMI touch response operating system. The two large, high-resolution displays – the upper one with a 10.1-inch, the lower one with an 8.6-inch diagonal – replace almost all switches and controls typically seen in cars. Operation is fast and safe: when the driver activates a function with their finger, the system confirms with haptic and acoustic feedback.

In addition to touch operation, many functions can be activated using natural voice control. The system understands freely worded commands and questions. The Dialog Manager asks questions, if necessary, allows corrections, offers choices, and also defers to the speaker when interrupted. In addition, Amazon’s virtual assistant Alexa can be used to check the news, the weather, and current scores of sporting events as well as to place grocery orders or create to-do lists. Alexa3 streams music and audiobooks from Amazon Music and Audible and provides access to a wide range of Alexa Skills; Audi has seamlessly integrated Amazon’s virtual assistant into the MMI system of the Audi Q8 e-tron. To use it, the driver doesn’t need to install an app on their smartphone or even pair their smartphone with the car; it’s as simple as connecting the car with the Amazon account and activating the service via the on-board voice control.

The digital display and operating concept in the Audi Q8 e-tron is rounded off with the standard Audi virtual cockpit with full HD resolution; the specific graphics display key parameters for electric driving, from charging power to range. Via the multifunction steering wheel, the driver can switch between two views: in the classic view, the power meter and speedometer appear as large round instruments; in infotainment mode, they are displayed smaller – and the navigation map moves to the center. The Audi virtual cockpit plus offers two additional views that can be set in the MMI: in addition to the Sport layout – as per the view in the S models – there is a display graphic with a particularly dynamic design: the RPM and speed are shown here as bar diagrams with angular, red graphical elements.

On request, an optional head-up display supplements the displays, projecting important information right onto the windshield – the projections appear to float about two meters in front of the driver.

3 Amazon, Alexa, and all related logos are registered trademarks of Amazon.com Inc. or associated companies.