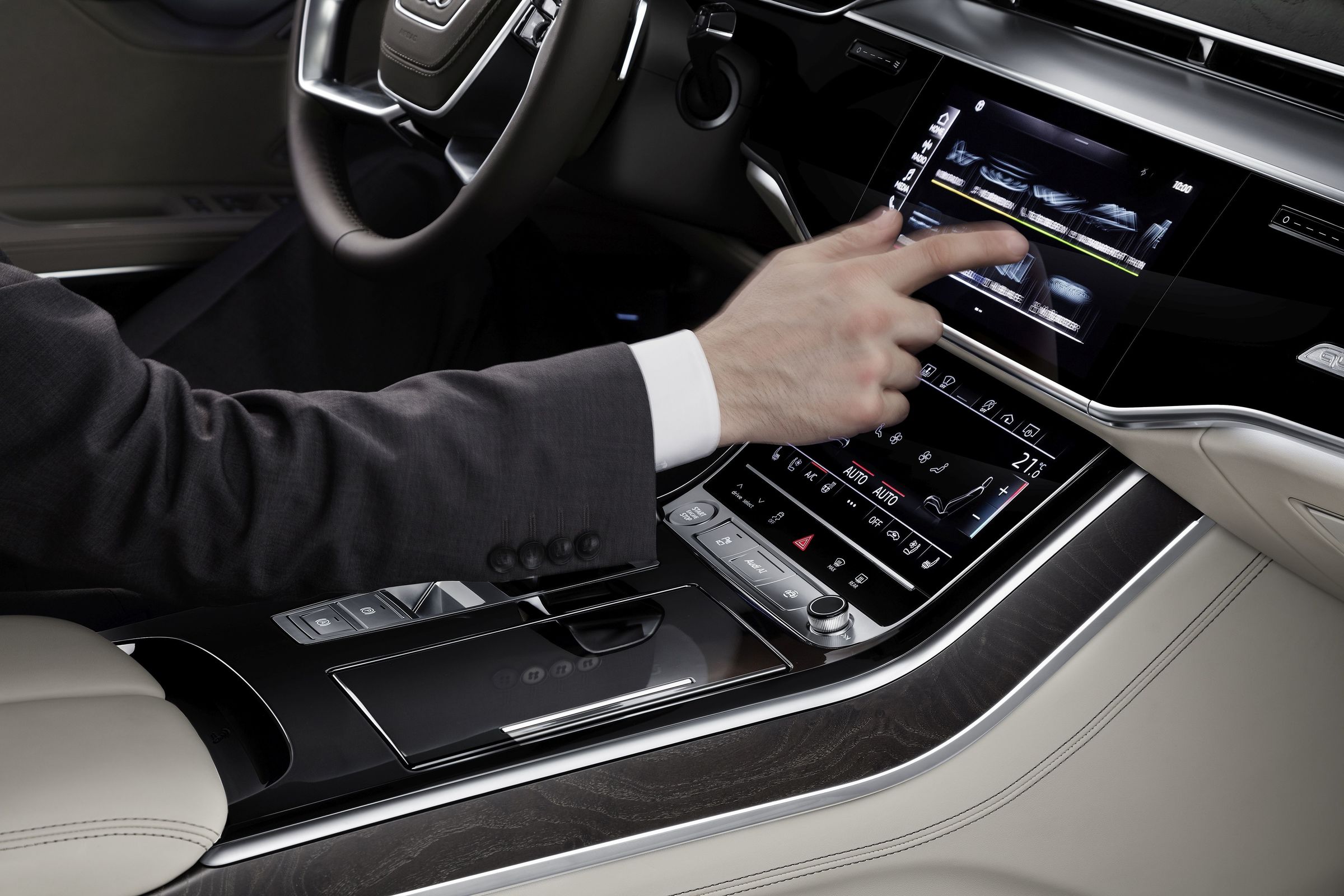 Touchpad, voice control, intelligent search functions – the options for user operation are extremely varied. They all aim to achieve a common goal: to guide the driver through the highly advanced infotainment system with high-resolution displays intuitively and ergonomically.

The Audi virtual cockpit is a fully digital instrument cluster with a 12.3-inch TFT screen. Depending on the model it has a resolution of 1,440 x 540 pixels or a full HD resolution of 1,920 x 720 pixels. Its display graphics are exceptionally sharp and highly detailed.

The display shows a wide range of information clearly and in neat, sharp, highly detailed graphics. It includes traditional speed and rpm figures as well as information on navigation, media and driver assistance systems. Fixed indicators are shown along the lower edge; they show the outside temperature, time and odometer readings as well as warning and information symbols. The image is refreshed 60 times per second so that the virtual needle of the rev counter tracks smoothly and very precisely.

The driver can use the View button on the multifunction steering wheel to switch the Audi virtual cockpit between two views: While the tachometer and speedometer are displayed as large dial-type gages in driving mode, a central window dominates in infotainment mode. It creates a large stage for the navigation map or for lists in the phone, radio and audio areas. In this case, the tachometer and speedometer are displayed as small dial instruments. In the S and RS models, both views specifically feature red graphic details. A performance layout where the central focus is the tachometer, displayed as a square graph, and the performance and torque are shown as percentages can also be selected in the MMI.

The Audi virtual cockpit plus has two further views that the driver can set in the MMI. In addition to the Sport layout – as per the view in the S models – there is a display graphic with a particularly dynamic design: The RPM and speed are shown here as bar diagrams with angular red graphical elements.

Audi MMI search is available for all basic menus, and like a search engine it is based on free text entry. It generally responds to searches after just a few letters have been input, taking into consideration the car’s current location. When searching for a place to eat, for instance, simply enter the name of the restaurant and the first letters of the city, and a list of hits appears together with the addresses – this works throughout Europe. Searching for tracks, albums and radio stations also works this way. Partly the MMI search integrates also intelligent functions.

When looking for a restaurant, for instance, the list of hits also includes Yelp ratings, provided that there is an internet connection. In addition, sorting can be performed according to various criteria. Fuel prices are listed for filling stations. Alternatively there is the option of a Google search.

The head-up display projects information relevant to the driver as symbols and numbers that can be quickly perceived within the driver’s direct field of view, including navigation and warning messages and data from assistance systems. The human eye perceives the information extremely quickly – and there’s no need for drivers to refocus from their accustomed long-range view.

Audi offers two different systems. In the A4, Q5 and higher model series, the image is projected onto the windshield. The information appears to hover around two meters (6.6 ft) in front of the driver within a visual window measuring 200 x 80 mm (7.9 x 3.1 in). A TFT monitor with white LED backlighting generates the color image. Two aspherical mirrors magnify and redirect the image. The mirrors also compensate for any distortions due to the curvature of the windshield. The driver can use the Audi MMI to specify which information should be shown in the head-up display; the height and brightness can also be adjusted here.

In the Audi Q2 the head-up display projects the graphics and numbers onto a separate glass panel. When the system is started, an electric actuator extends the 100 x 50 millimeter (3.9 x 2.0 in) panel upward from the instrument panel behind the instrument cluster. The height of the visual window can be adjusted to match the driver’s height when seated. The MMI is used to choose the information to be displayed, such as navigation symbols or information about the assistance systems.

Audi offers various systems under the MMI touch concept. On certain models this involves a round rotary/pushbutton control in the center console which features a touchpad on its surface. The touchpad is used to input characters and also for multifinger gestures, enabling the driver to zoom in on the map, for example. Buttons around the edge supplement the terminal. The larger MMI all-in-touch is available as another version: The driver can write, zoom and scroll on its glass surface and receives acoustic and haptic feedback each time a command is input. In some cases the MMI touch also comes as a display in the center console. Depending on the equipment level, it has an 8.8 or 10.1-inch diagonal. On the large touch display, the driver manages all navigation and infotainment functions with one finger. The driver can also enter letters and characters.

Audi is presenting the latest evolution stage of its MMI operating concepts with the MMI touch response. Following the premiere in the fourth generation of the Audi A8 (2017) it is now being incorporated into other model lines. The central element is the 10.1-inch touch display in black panel technology. When not in use, the screen blends almost invisibly into the high-gloss black faceplate of the instrument panel. When starting the system, the user interface appears with its concise graphics. With a resolution of 1,540 x 720 pixels, the TFT screen provides pin-sharp images and high contrast, even when viewed from an angle. The large display is used for controlling navigation, media and vehicle functions. The driver can click, swipe, zoom and scroll on it. The menu structure including the search functions is intuitive and flat, like that of a modern smartphone.

The key strength of the MMI touch response technology is its haptic feedback. When a finger touches the display glass, it does not immediately activate a function – a gentle push with a defined pressure is required to do that. The mechanical pulse that the driver feels as confirmation feedback is created by an electromagnet that shifts the spring-mounted display very slightly sideways – by roughly the width of a human hair. At the same time a small loudspeaker emits a click sound.

Clever detailed solutions make using the new technology even more attractive. If a finger touches an icon, the software confirms either by an animation or a change in color. If the finger pushes so hard that it triggers the function, the icon or list entry lights up briefly. Similar to on a smartphone, many symbols are supported by long-touch and long-push functions. That allows the driver to reposition a tile, for instance.

A second display on the console of the center tunnel is used to operate the air conditioning system and convenience features. The driver can save preferred functions as favorites. The display has an 8.6-inch diagonal and a screen resolution of 1,280 x 660 pixels. Since the driver’s wrist rests on the transmission’s gear selector knob, the display can be operated very comfortably. The driver can also enter text – either via a digital keyboard (when the vehicle is stationary) or by innovative handwriting recognition which can recognize entire words in handwriting as well as letters handwritten on top of one another. Audible feedback is given for each recognized letter, so that the driver can always keep his or her eyes focused on the road.

The surfaces of the two displays have a type of anti-fingerprint coating. This makes it easy to wipe off fingerprints. There is also an anti-glare layer that refracts the reflected light. This blurs the reflections so they do not distract the driver. The top layer is toughened, making it very sturdy and scratch-resistant.

Natural language voice control understands many formulations from everyday speech. All that is necessary to call a contact is a command such as “I want to call Peter Miller.” The navigation system also responds to natural language inputs such as “Where can I refuel?” or “Where is the closest Italian restaurant?”. The new voice control system, which also permits dictation of text messages, is also available without an Internet connection and works with the Radio and Media menus too. Voice control is activated by pressing the voice control button on the steering wheel.

Models that use the modular infotainment platform 2+ (MIB 2+) and are equipped with MMI navigation plus have hybrid voice control. It answers commands and questions in two ways. For one, the system accesses data about the user’s preferences, including navigation destinations or special destinations that are saved in the vehicle, for instance. For another, it accesses knowledge from the cloud. The driver’s question is sent to speech recognition software as a data packet. If the network signal is good, the answer takes less than two seconds to arrive.

The driver can freely formulate spoken commands – the voice recognition system understands such sentences as “Please take me to the Adlon Hotel in Berlin”. The clever dialogue manager asks questions, if necessary, allows corrections, offers choices and also accepts being interrupted. In dialogue with the voice control system, the driver can switch between different menu areas. For example, the driver can call a contact from the phone book and then use the associated address as a navigation destination. The new hybrid voice control system is also connected with media sources, the air conditioning system, telephone functions and selected Audi connect services.

Audi has conceptualized the compact rear seat remote for passengers in the rear seating area. This control unit is approximately the size of a smartphone. Its touch surface can be used to control many functions relating to air conditioning, seating, lighting, settings and media functions – from the HD matrix reading lights to seat and foot massage, the rear window blinds and music. When the matching Audi phone box is on-board, the rear seat remote can serve as a mobile phone. It integrates a microphone and a small loudspeaker. In addition, it can remotely control the Audi tablet – this is especially convenient when the tablet is installed on the back of the front seat. On-board communication utilizes the new 5 GHz Wi-Fi band.

The rear seat remote has a 5.7-inch touchscreen in OLED technology with full HD resolution (1,920 x 1,080 pixels). Its aluminum case is very high-quality, and the technology is designed to withstand the temperature extremes that can occur inside the car. In the A8 (D5), the rear seat remote clips into and is charged in the center console in the four-seat model and in the center armrest in the five-seater. Its battery enables up to six hours of phone use. Depending on the rear equipment specification, the control unit is supplied as standard or an option.