New Audi A8 will make its debut in
‘Spider-Man: Homecoming’ 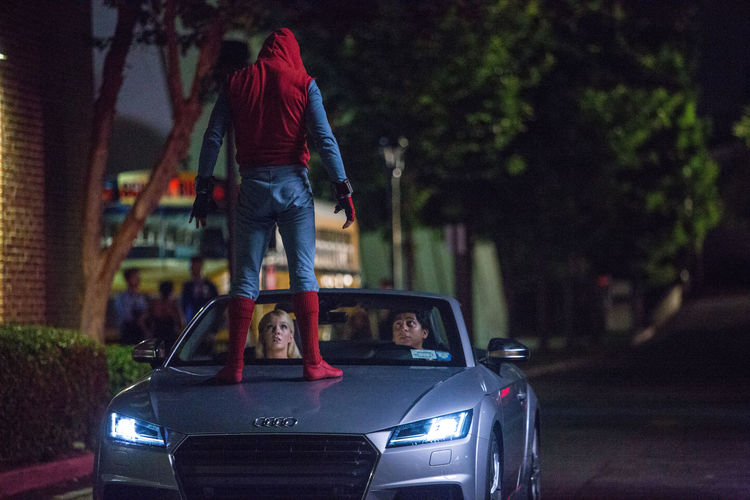 Before the official world premiere, the new Audi A8* appears on the silver screen. The flagship of the premium brand makes a guest appearances in the Marvel blockbuster ‘Spider-Man: Homecoming,’ in theaters worldwide in July . Therefore, movie fans will be the first to catch a glance at the luxurious sedan at the film premiere which takes place in Los Angeles on June 28.

In the Marvel blockbuster, Tom Holland plays ‘Peter Parker’ who’s chauffeured around by ‘Happy Hogan’ (Jon Favreau) in the new Audi A8 L. The movie scene allows a first impression of the front and side design of the new sedan. Besides that, moviegoers also get a demo of new innovations such as highly automated driving in traffic jams: while driving ‘Happy’ takes his hands off the steering wheel and, like magic, it continues to turn all on its own. The Audi A8 takes over the task of driving when the Audi AI traffic jam pilot is turned on.

In addition to the Audi A8, two other Audi models make guest appearances in ‘Spider-Man: Homecoming’: ‘Tony Stark’ stays classy with the Audi R8 V10 Spyder*, whereas ‘Peter Parker’ himself drives an Audi TTS Roadster*. The new Audi A8 will be officially presented to the public on July 11th at the Audi Summit (www.summit.audi) in Barcelona, Spain. ‘Spider-Man: Homecoming’ featuring the new Audi A8 will be in movie theaters around the world in July.

Audi A8:
This vehicle is not yet offered for purchase. It does not yet have type approval and is therefore not subject to the directive 1999/94/EC.

About Spider-Man: Homecoming
A young Peter Parker/Spider-Man (Tom Holland), who made his sensational debut in Captain America: Civil War, begins to navigate his newfound identity as the web-slinging super hero in Spider-Man: Homecoming. Thrilled by his experience with the Avengers, Peter returns home, where he lives with his Aunt May (Marisa Tomei), under the watchful eye of his new mentor Tony Stark (Robert Downey Jr.). Peter tries to fall back into his normal daily routine - distracted by thoughts of proving himself to be more than just your friendly neighborhood Spider-Man - but when the Vulture (Michael Keaton) emerges as a new villain, everything that Peter holds most important will be threatened. Directed by Jon Watts. Produced by Kevin Feige and Amy Pascal. Screenplay by Jonathan Goldstein & John Francis Daley and Jon Watts & Christopher Ford and Chris McKenna & Erik Sommers, Screen Story by Jonathan Goldstein & John Francis Daley, Based on the Marvel Comic Book by Stan Lee and Steve Ditko.