{{ activeItem() }}
Twitter
02/24/21
Oliver Hoffmann named new Member of the Board for Technical Development: The Supervisory Board Chair @Herbert_Diess… https://t.co/aBKY4VdPQX
02/23/21
The #future of #mobility: By 2050, roughly 70% of the world population will live in #urban areas according to the… https://t.co/i4PQUMifFd
02/23/21
A more powerful #battery and longer range: the #Audi plug-in hybrids Q5, A6 and A7 Sportback just received an upgra… https://t.co/kSdxH99ELz
02/22/21
A goosebumps moment. Linda Kurz, Head of Product Marketing at Audi Sport, shares her first experience of the high-p… https://t.co/JFwIDpTEZm
Audi on Twitter
YouTube
02/22/21

Todays episode of #WhatsupAudi​ is all about the World Premiere of the brand new Audi e-tron GT and RS Audi e-tron GT. We will show you all technical details as well as an in-depth look at the sustainable production and the interior of the new Audis. #Audi #VorsprungDurchTechnik #2021 You can find more details here: https://www.audi-mediacenter.com/en/p...​ --- Welcome to the Audi YouTube channel, the home of “Vorsprung”. On this channel, you’ll find first-hand information on us as a company, innovations and coverage of exciting model releases. Be prepared for fascinating formats and the reporting of important events. Subscribe for thrilling insights, diverse opinions and new perspectives on the brand with Four Rings and become a member of a worldwide community of automotive aficionados. Imprint: https://www.audi-mediacenter.com/en/i...
02/17/21

A story of progress: Tom Klocker 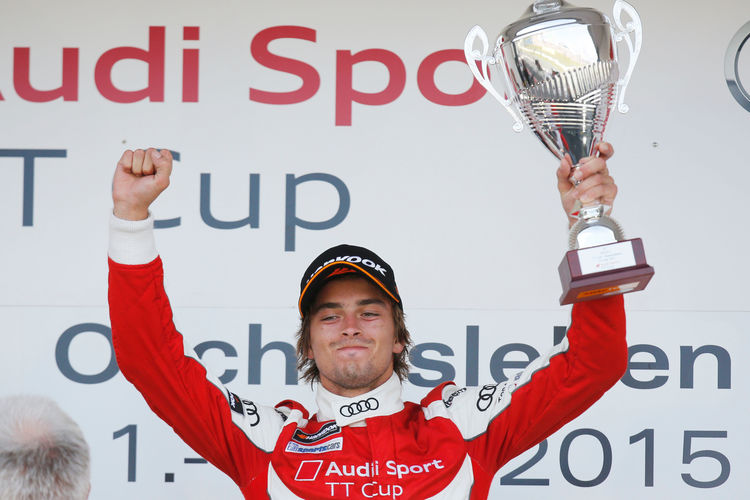 Jan Kisiel (PL) is the man of the hour in the Audi Sport TT Cup. At the Motorsport Arena Oschersleben, the 21-year-old celebrated his second and third victories this season. Following a perfect weekend, he took the overall lead in the Audi one-make cup from Nicolaj Møller Madsen (DK) as well. In the guest entrants’ classification, touring and sports car expert Uwe Alzen prevailed twice.

Kisiel was beaming near Magdeburg as if he was in competition with the sun. Following first place in free practice and a perfect qualifying session in which he secured the top spot on the grid for both races, the young driver from Warsaw prevailed in rounds seven and eight of the Audi Sport TT Cup season as well. After a hard-fought triumph in race one, Kisiel clinched an uncontested lights-to-flag victory ahead of Joonas Lappalainen (FIN) and Dennis Marschall (D). In performing these feats, the winner emphasized that Germany’s northernmost circuit is one of his favorite tracks. Six times in his career he has been on the grid at Oschersleben so far, scoring six podium finishes – on the top step in four of the races.

Project Leader Rolf Michl provided a positive assessment following the fourth of six race weekends in the Audi Sport TT Cup: “The spectators got to see two very thrilling and diverse races with stunning overtaking maneuvers. High compliments to the young drivers that fought spectacular duels but always remained fair on track although the battle for the championship is entering its crucial stage.”

In the guest entrants’ classification, the ‘old hands,’ Uwe Alzen (D), Frank Biela (D) and Harald Grohs (D), not only brought experience to the races, but provided hands-on advice to the ‘young guns’ from the Audi one-make cup at all times. On track, Alzen was the front runner twice in the internal duel. In race one, Playmate Doreen Seidel (D) and TV host Tim Schrick (D) completed the podium of the guest drivers. After round two, Alzen was accompanied to the champagne shower by Alex Lloyd (USA) and Schrick again.

In the overall classification of the permanent entrants, Jan Kisiel has taken the overall lead after eight of the season’s twelve races. With a score of 149 points, he has a nine-point advantage over the previous front runner Nicolaj Møller Madsen, who took positions six and four at Oschersleben. They are trailed in third place by Dennis Marschall with 121.5 points. The next race weekend will be at the Nürburgring on September 26 and 27.