Heat, dust and tire changes: A lot of work for Audi Sport at the Morocco Rally 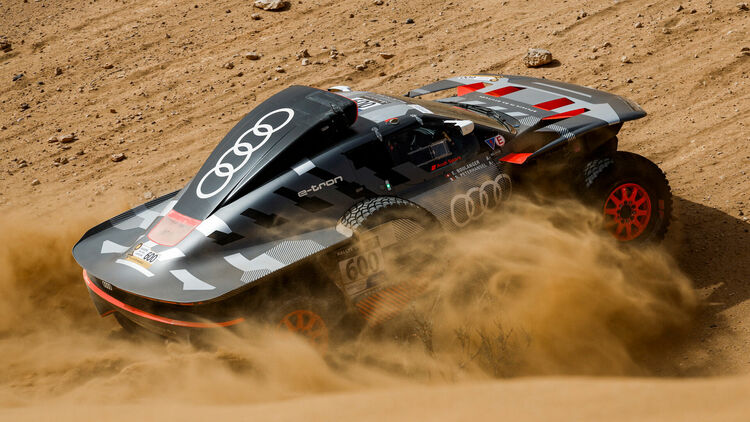 Learning at a high level: At the Morocco Rally, the new Audi RS Q e-tron completed its competition debut from October 1 to 6. For Audi Sport and the driver pairings Mattias Ekström/Emil Bergkvist, Stéphane Peterhansel/Edouard Boulanger and Carlos Sainz/Lucas Cruz, it was a test under competition conditions. The three rally prototypes already comply with the 2023 regulations for the Dakar Rally and therefore started in Morocco outside the regular classification in the Open class.

“Even though we didn’t appear in the classification, every kilometer and every single day of the rally was as valuable for us as it was for the regular participants,” says Head of Audi Motorsport Rolf Michl. “On demanding stages and varied terrain we were able to test the abilities of the driver teams and the cars in every situation. For us, the rally with its extreme dunes and stony landscapes was an essential element in the preparation for the Dakar Rally.” The driver teams mastered demanding challenges on the six stages with start and finish in Agadir: Repeated punctures on the rough surface, tough heat, poor visibility in dense dust and many a navigation error characterized the operation. And once again it became clear that the drivers put their cars under greater strain in racing conditions than in testing.

“The race was very important for us to verify the results from our previous test,” says Sven Quandt, Managing Director and Team Principal of Q Motorsport. “We saw that we still have to improve some points, which we will work off until the Dakar. Overall, though, I’m very positive that we’ll have a well-prepared car in January.” The three drivers in Team Audi Sport also draw a positive conclusion. “The tire failures and a few navigation errors kept reminding us of the difficulties in the competition. But our engineers did a good job because I’m really very happy with the set-up of the car,” reports Mattias Ekström. “A race is and remains the best race preparation.” Teammate Stéphane Peterhansel, 14-time Dakar Rally winner, shares this view: “Our previous work from the tests in Europe and Africa is paying off in full here. The stages in Morocco are quite similar to the Dakar Rally. The balance and handling of the car are exactly as I would like them to be.” Carlos Sainz, who has won the Dakar Rally three times, confirms the positive development: “Even though we sometimes got lost and had to change tires, the most important news is that our car is running wonderfully. Thanks to the whole team for the good work.”

“Since it wasn’t about sporting goals, we set ourselves very specific, different daily tasks,” explains Uwe Breuling, Head of Vehicle Operations Audi Sport. “For example, we learned a lot about the battery’s state of charge under extreme stress. Likewise, on the fourth stage the team imposed on itself those conditions that apply on a cross-country stage during the Dakar Rally. This meant that the drivers and co-drivers had to maintain the RS Q e-tron on their own that evening for the next day without the team’s help. We also collected a lot of data and are sorting out final details, such as with the software.”

In addition to many a learning effect, Team Audi Sport saw its previous direction of work confirmed in many areas. “The drivetrain and the suspension with the dampers were up to the tough loads,” sums up Benedikt Brunninger, Technical Project Manager Dakar. “None of the cars broke down or lost much time. Before the Dakar Rally, we have to take care of some details, for example, the drivers would like a different positioning for the electric wheelguns in the car.”

Audi Sport is concentrating on preparations for the Dakar Rally together with the Q Motorsport entry team over the next few weeks. The technicians will dismantle all three Audi RS Q e-tron cars, analyze their findings and rebuild the race cars by November. Then, after a short functional test, they will already be transported to Saudi Arabia where the 2023 Dakar Rally starts on December 31.