{{ activeItem() }}
Twitter
08/11/22
#Imagine you drive an Audi RS Q e-tron and can go wherever you want. But there are so many fantastic places. Where… https://t.co/Ui3xiksIsr
08/10/22
When fast charging on hot days, we recommend you don’t sit in the car with the air conditioner on full blast. Other… https://t.co/X4xBYoI2iI
08/10/22
Modular production makes manufacturing more flexible than a conventional assembly line. What do you think – who ben… https://t.co/Ec9dTvk72n
08/09/22
Forget outer space, we’re all about interior space. With five spacious seats, the fully electric Audi e-tron S is c… https://t.co/FNscwjEVjn
Audi on Twitter
YouTube
08/01/22 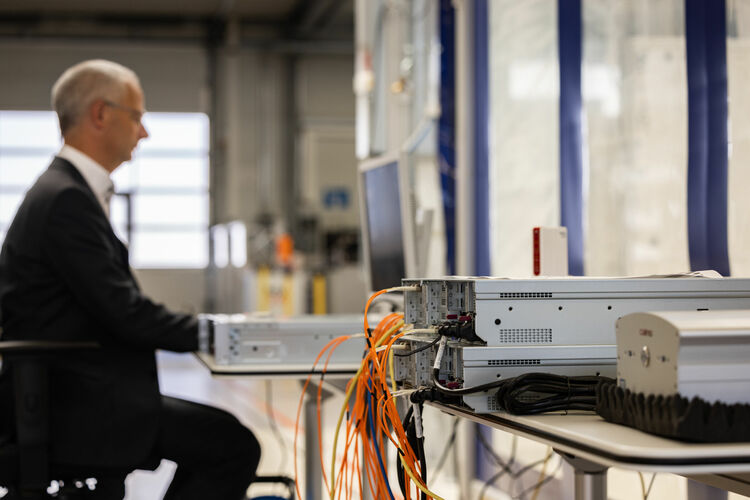 Centralized, not decentralized; local servers, not hundreds of industrial PCs; software, not hardware: with the local server solution Edge Cloud 4 Production, Audi is initiating a paradigm shift in automation technology. After successful testing in the Audi Production Lab (P-Lab), three local servers will take over directing workers in the Böllinger Höfe. If the server infrastructure continues to operate reliably, Audi wants to roll out this automation technology – the only one of its kind in the world – for serial production throughout the entire Volkswagen Group.

Henning Löser, head of Audi's Production Lab, pulls the plug on a server in Ingolstadt’s P-Lab. Simulated production in the Böllinger Höfe keeps going without interruption. Two other servers reliably continue controlling 36 cycles during the lab test in the P-Lab in Gaimersheim. Audi wants to be the first manufacturer in the world to turn to these kinds of centralized server solutions in cycle-dependent production. In the Böllinger Höfe near Neckarsulm, the Audi e-tron GT quattro and the R8 share an assembly line. The small-scale series e produced there are particularly well suited for testing projects from the P-Lab and trying things out for large-scale series.

With the Edge Cloud 4 Production, a few centralized and local servers will take on the work of countless expensive industrial PCs. The server solution makes it possible to level out spikes in demand over the total number of virtualized clients – a far more efficient use of resources. Production will save time and effort, particularly where software rollouts, operating system changes, and IT-related expenses are concerned. “What we’re doing here is a revolution,” says Gerd Walker, Member of the Board of Management of AUDI AG Production and Logistics. “We used to have to buy hardware when we wanted to introduce new functions. With Edge Cloud 4 Production, we only buy applications in the form of software. That is the crucial step toward IT-based production.” For P-Lab boss Löser, the project is “an operation at the heart of our automation technology and production management.” Audi is the first manufacturer to put a centralized server solution into test operation in cycle-dependent production.

Servers Are Close to Production

The crucial advantage of Edge Cloud 4 Production is that countless industrial PCs can be replaced along with their input and output devices and no longer need to be individually maintained. Process safety is also greatly improved. In the event of a disruption, the load can be shifted to other servers. In contrast, a broken industrial PC would have to be replaced. That takes time. On top of that, the solution reduces the workload for employees. In the future, thin clients capable of what is known as power-over-Ethernet will set the pace. These terminal devices get their electrical power via Ethernet cables and most of their computational power through local servers. They have USB ports for output devices. That enables managers directing workers to look at a monitor and see what needs to be mounted onto which vehicle. In the future, an oversized PC with processing and storage capacity will not be necessary for these tasks. “Software-based infrastructures have proven themselves in data processing centers. We’re convinced they will also work well in production,” says Löser.

Cloud Solutions Can Be Scaled At Will

Together with the experts from the P-Lab, the IT managers around Christoph Hagmüller, the Head of IT Services at Audi in Neckarsulm and co-manager for Production IT in the Böllinger Höfe, are rolling out the new solution. With its comparatively low unit and cycle numbers, the Böllinger Höfe is ideally suited to functioning as a real lab for testing the new concept in series production. Edge Cloud 4 Production has a hyper-converged infrastructure (HCI). This software-defined system combines all the elements of a small data processing center: storage, computing, networking, and management. The software defines functionalities like web servers, databases, and managing systems. The cloud solution can also be quickly scaled at will to adapt to changing production requirements. However, a public cloud link is out of the question due to production’s stringent security requirements. Additionally, local servers make the necessary, very short latencies possible. “These are the reasons why we install the servers near us. That’s also why we call the solution Edge Cloud: because it’s close to our shop floor environment,” says P-Lab boss Löser.

The new IT concept also improves ease of maintenance and IT security. With industrial PCs, the patch cycles (the intervals between necessary updates) are usually longer. On top of that, updates can only be installed during pauses in production. With the cloud-based infrastructure, IT experts can roll out patches in all phases within a few minutes via the central servers. Moreover, IT colleagues install functionality updates in all virtual clients at the same time, such as a new operating system. Hagmüller explains that “the need for additional functionality will get increasingly elaborate and expensive in the future.” He estimates that the cost of an update – for instance, from Windows 10 to Windows 11 – can be reduced by about one-third. “Additionally, with the server solution, we aren’t dependent on loose timeframes in Production anymore. It gives ustremendous flexibility to ensure our software and operating systems are always completely up to date.”

P-Lab Tries Out Guidance via a 5G Radio Network

Both data processing centers in the Neckarsulm plant are slated for subsequent mass production. A fiber optic cable connects them with the Böllinger Höfe. According to Henning Löser, 5G will be relevant in the second stage. Thus far, a separate computer has been installed in every automated guided vehicle (AGV). Here too, experts must install costly security updates and new operating systems. It is conceivable that they could acquire new functionalities, but they are seldom transferable to their computers. “We need a fast, high-availability network for that,” says Löser. “In our testing environment in the P-Lab, we have taken another step forward concerning 5G.”