Audi A8 in disguise as surprise guest at the
world premiere of ‘Spider-Man: Homecoming’ 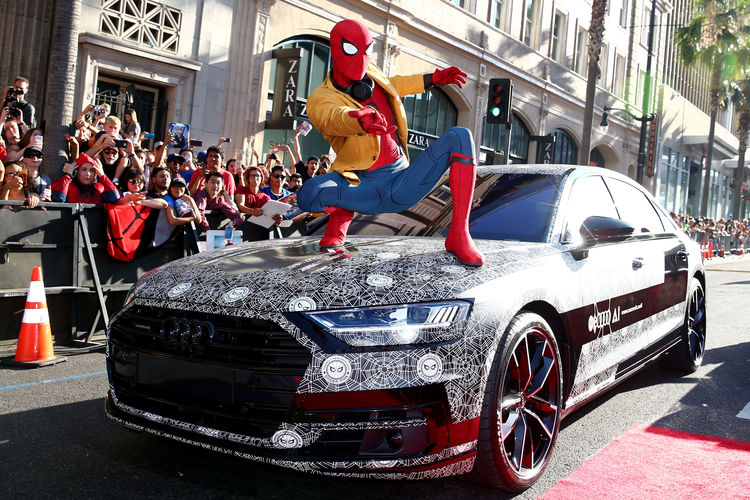 Wednesday night the new Audi A8 could be seen in Los Angeles alongside many Hollywood stars at the world premiere of ‘Spider-Man: Homecoming.’ Tom Holland, who stars as Peter Parker / Spider-Man, was chauffeured down the red carpet at the TCL Chinese Theatre. Meanwhile, Robert Downey Jr. and Jon Favreau arrived together in a black Audi R8 Spyder.
Download PDF (149 KB)
Facebook
Twitter
LinkedIn
WhatsApp

Wednesday night the new Audi A8* could be seen in Los Angeles alongside many Hollywood stars at the world premiere of ‘Spider-Man: Homecoming.’ Tom Holland, who stars as Peter Parker / Spider-Man, was chauffeured down the red carpet at the TCL Chinese Theatre. Meanwhile, Robert Downey Jr. and Jon Favreau arrived together in a black Audi R8 Spyder*.

Normally, Audi’s Technical Development team conceals their secret prototypes with a special adhesive foil with a camouflaged pattern of black and white swirls. However, this time Audi Design developed a new camouflage foil with a Spider-Man design specifically for the appearance on the red carpet at the world premiere of ‘Spider-Man: Homecoming’. The traditional swirl design has been modified to incorporate spider webs on the vehicle doors and within the signature rings.

Even before its official world premiere, the first glimpses of the Audi A8’s can be seen on the big screen in ‘Spider-Man: Homecoming’ – viewers can see parts of the front and side designs in the film. In addition, moviegoers also get to see Audi AI Traffic Jam Pilot in action when Happy Hogan drives Peter Parker and momentarily removing his hands from the wheel. Thanks to the activated Audi AI Traffic Jam Pilot, the Audi A8 can take over the task of driving and continues to move autonomously.

Audi is set to officially present the new A8 to the public on July 11, 2017 at the Audi Summit (www.summit.audi) in Barcelona. ‘Spider-Man: Homecoming’, featuring the new Audi A8, can be seen in movie theaters worldwide in July.– End –

Fuel consumption of the models named above:
Audi A8 (next generation):
This vehicle is not yet offered for purchase. It does not yet have type approval and is therefore not subject to the directive 1999/94/EC.

**Figures depend on the tires/wheels used.

About ‘Spider-Man: Homecoming’
A young Peter Parker/Spider-Man (Tom Holland), who made his sensational debut in Captain America: Civil War, begins to navigate his newfound identity as the web-slinging super hero in Spider-Man: Homecoming. Thrilled by his experience with the Avengers, Peter returns home, where he lives with his Aunt May (Marisa Tomei), under the watchful eye of his new mentor Tony Stark (Robert Downey Jr.). Peter tries to fall back into his normal daily routine - distracted by thoughts of proving himself to be more than just your friendly neighborhood Spider-Man - but when the Vulture (Michael Keaton) emerges as a new villain, everything that Peter holds most important will be threatened. Directed by Jon Watts. Produced by Kevin Feige and Amy Pascal. Screenplay by Jonathan Goldstein & John Francis Daley and Jon Watts & Christopher Ford and Chris McKenna & Erik Sommers, Screen Story by Jonathan Goldstein & John Francis Daley, Based on the Marvel Comic Book by Stan Lee and Steve Ditko.