The EXTERIOR DESIGN: expressive and powerful 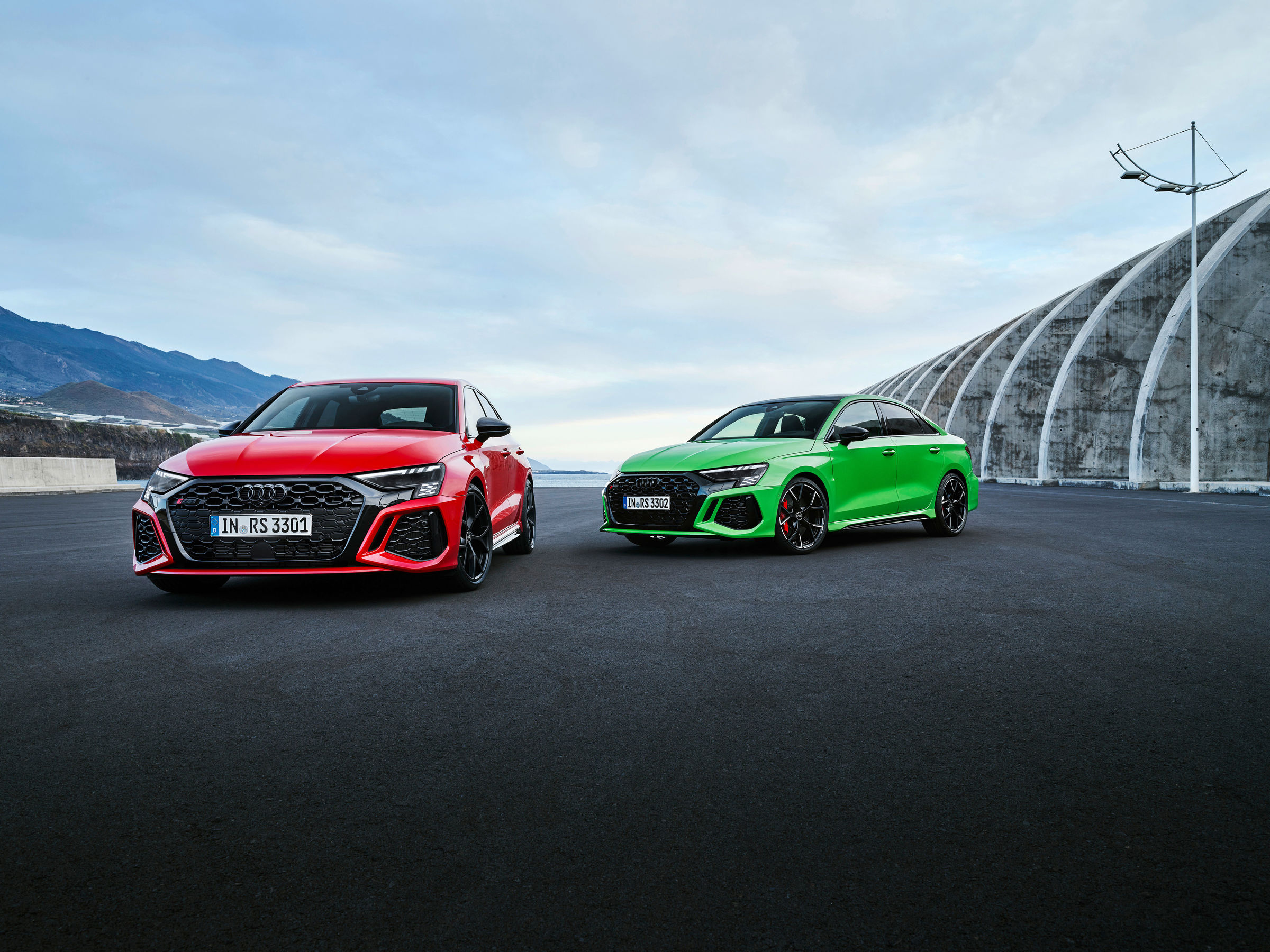 The front features the wide RS bumper, the redesigned Singleframe with matte black or optionally glossy black honeycomb grille, and the extra-large air intakes. There is also a new design element behind the fenders: a slightly protruding air outlet. The eye-catching rocker panels, including black trim, combined with the pronounced wheel arches, also contribute to the expressive appearance of the new compact sports cars.

At the rear of the RS 3, the bumper with integrated diffuser and the exhaust system with one large oval tailpipe on each side have also been redesigned. The diffuser, which is divided by vertical bars, has a very large surface area and is thus designed with racing in mind. The standard exhaust system features chrome-plated tailpipe trim, while the optional RS sports exhaust system features black tailpipe trim. While a distinctive roof edge spoiler generates the necessary downforce on the Sportback, an RS‑specific spoiler lip on the luggage compartment lid improves the aerodynamics of the Sedan.

Distinctive signatures and dynamic lighting effects also contribute to the automotive personality of the new Audi RS 3. The RS 3 comes standard-equipped with flat, V-shaped LED headlights and LED taillights, including dynamic turn signal lights. Matrix LED headlights are available as an option, with darkened bezels that feature digital daytime running lights around their outer downturned angles. With its pixel field of 3 x 5 LED segments, it creates an unmistakable look – when the vehicle is opened, “R”, “S”, and “3” appear one after the other as a dynamic scene on the driver’s side, while the of the other headlight’s pixel field displays a checkered flag. When driving, the checkered flag lights up on both sides. A 3D-looking RS-specific animation also appears in the LED taillights.

The new RS 3 models can be ordered in the RS-specific colors Kyalami Green and Kemora Gray. Other exterior finish options include Turbo Blue, Glacier White, Mythos Black, Tango Red, Python Yellow, and Daytona Gray. Customers can also have the RS 3 painted in a color of their choice.

In addition, the roof of the Sedan can be ordered in the contrasting color Brilliant Black for the first time. The technical foundation for this is what is known as overspray-free painting. This technology makes it possible to apply two different colors in the same paint-spraying pass. For this purpose, a robot-controlled and high-precision measuring device measures the laser-brazed seam between the roof and the sidewall frame. An applicator then applies a black paint developed specifically for this process in stripes to the bodywork with millimeter precision and without spray mist. The precise succession of the fine color stripes creates the contrast coating – in just one pass.

For an even more personalized look, there are two appearance packages – high-gloss black and matte aluminum – that add accents to the front bumper, diffuser insert, and window trim. For a sportier look, the rocker panel inlays are also available in carbon-fiber-reinforced polymer. The same applies to the mirror caps, the tailgate spoiler on the Sedan, and the roof edge spoiler on the Sportback.