Skip to content
We are using cookies for a better user experience.
09/10/18
Neuburg a. d. Donau
Motorsport 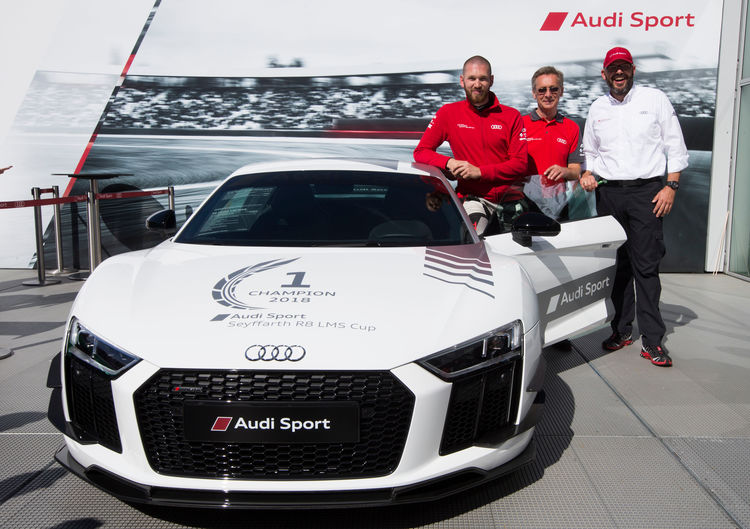 While Audi Sport customer racing decided the Eset V4 Cup in Central Europe with Team Olimp Racing and Marcin Jedliński in its favor Kris Heidorn celebrated the title in the Audi Sport Seyffarth R8 LMS Cup at the Nürburgring.

Title success in Central Europe: Marcin Jedliński in an Audi R8 LMS won two titles in the Eset V4 Cup. In the finale of the Central European racing series on the circuit at Brno in the Czech Republic, the Polish race driver from Team Olimp Racing together with his compatriot Mateusz Lisowski won the endurance race in an Audi R8 LMS. In the endurance race standings, Jedliński is ranked in position one, trailed by Lisowski. Jedliński in his debut season won the sprint classification in an Audi as well. Second place in the standings went to Richard Chlad jr. The Czech drove an Audi R8 LMS ultra, took second place in his class in sprint one at Brno and won his classification in the second sprint.

Audi top-class at the Sachsenring: The sixth race weekend of the ADAC GT Masters has been the most successful one for the Audi Sport customer teams to date. On the roller coaster track near Hohenstein-Ernstthal, the customers celebrated a one-two-three success on Sunday. Elia Erhart/Pierre Kaffer achieved the first victory of the newly formed EFP by TECE team with a sensational fightback from P27 on the grid. Like the day before, second place with a gap of just three tenths of a second went to brothers Kelvin and Sheldon van der Linde from Montaplast by Land-Motorsport. Trailing them by three more tenths, BWT Mücke Motorsport completed the podium with Jeffrey Schmidt and Stefan Mücke. With that, Kelvin and Sheldon van der Linde managed the leap from seventh to fourth position in the standings. Before the finale, the two South Africans are separated from the leaders of the standings by 20 points. 50 points are yet to be award at Hockenheim two weeks from now. In addition, their team, Montaplast by Land-Motorsport, improved to third place in the teams’ classification. In the juniors’ classification, Sheldon van der Linde moved into the top spot, trailed by three other Audi privateer drivers, Philip Ellis, Max Hofer and Jeffrey Schmidt.

Lead of the standings maintained: On the fourth race weekend of the GT Sweden, Jan Brunstedt only needed a podium finish to stay in front. The Swedish gentleman driver on the occasion of the series’ visit to Norway finished the first race runner-up in an Audi R8 LMS ultra on the circuit at Rudskogen. As a result, Brunstedt has a 25-point advantage in the standings before the finale at Mantorp Park in two weeks.

Two successes in China: Team Kings has continued its winning streak in the China GT. On the fourth race weekend at Shanghai, Xu Jia from China and the Belgian Alessio Picariello in an Audi R8 LMS won both races in spite of 50 kilograms of ballast weight for previous successes. Thus, the Chinese customer team remains unbeaten in this series in the 2018 season. Xu Jia is now leading the standings with a 33-point advantage while Alessio Picariello is ranked in position three. In the GTC class for Cup race cars, Jeffrey Zee and Jason Zhang in an Audi R8 LMS took third place in race one.

Third place in Italy: Audi Sport Italia at Vallelunga celebrated its fifth podium result this season. In round five of the Italian GT Championship, Bar Baruch and Mattia Drudi achieved third place in an Audi R8 LMS in race one. As a result, Baruch, with two more events yet to be held, is ranked in position four of the drivers’ standings.

First Audi victory in France: Saintéloc Racing celebrated the first victory of the Audi R8 LMS GT4 in the GT4 France. The long-standing Audi customer team won the first round at Magny-Cours on the fourth race weekend with Gregory Guilvert/Fabien Michal. In race two, the driver duo took second place ahead of its teammates, Christophe Hamon/Lonni Martins. In the Pro-Am drivers’ classification, Guilvert/Michal thus advanced from fourth to second position on the fourth of six race weekends. At the same time, Saintéloc Racing occupies second place in the teams’ classification. With some 40 participants in the field the French championship is one of the world’s toughest GT4 series.

Kris Heidorn first Cup winner: Kris Heidorn is the first driver to have won the Audi Sport Seyffarth R8 LMS Cup. The 29-year-old from Lower Saxony in the finale at the Nürburgring won race one ahead of the Pole Robin Rogalski who had managed a strong comeback from position eight on the grid. Third place went to Mike Hesse. In race two, Bartosz Paziewski from Poland celebrated his second victory this season. The German Fabio Citignola as runner-up and the Pole Pieniazek Przemyslaw in third place were pleased to have scored their best results this season as well. Vivien Keszhtelyi was happy too: The 17-year-old Hungarian who had been promoted from the Audi Sport TT Cup to the Audi Sport Seyffarth R8 LMS Cup finished the season runner-up ahead of Bartosz Paziewski. Keszhtelyi was only one of four talents to have scored points in every race. In addition, she mounted the podium twice. 23 participants contested the new one-make cup in an Audi R8 LMS GT4 during the year either as occasional or permanent entrants.

Second in class in 24-hour race: In round five of the 24H TCE Series, Team Baporo Motorsport brought home a podium finish in a strong field of 16 entrants. In the Barcelona 24 Hours, the local team had competed with Italians Alberto Vescovi and Roberto Ferri and Spaniards Jaime Font Casas and Alvaro Vela. Their Audi RS 3 LMS crossed the finish line in second place of the TCR classification.

Runner-up in Central Europe: Václav Nimč jr. achieved second place in a field of 16 entrants in the TCR classification of the Eset V4 Cup. The Czech in an Audi RS 3 LMS of Team Krenek Motorsport clinched two third places on the fifth race weekend at Brno. During the season, the up-and-coming driver had won his class twice and achieved two second and five third places.

Another turn in title race: Britt Casey jr./Tom Long turned the tables in the title race once more on scoring their fourth success this season in the TCR class of the IMSA Continental Tire SportsCar Challenge. Due to its victory at Laguna Seca, the duo from Team Compass Racing in an Audi RS 3 LMS took the lead of the standings before the finale with a five-point advantage ahead of its teammates, Rodrigo Sales/Kuno Wittmer, who placed fifth. Second place in California went to Michael Johnson and Stephen Simpson from JDC-Miller MotorSports, third place to Tom O’Gorman/Kenton Koch from eEuroparts.com Racing. All teams are relying on the Audi RS 3 LMS.