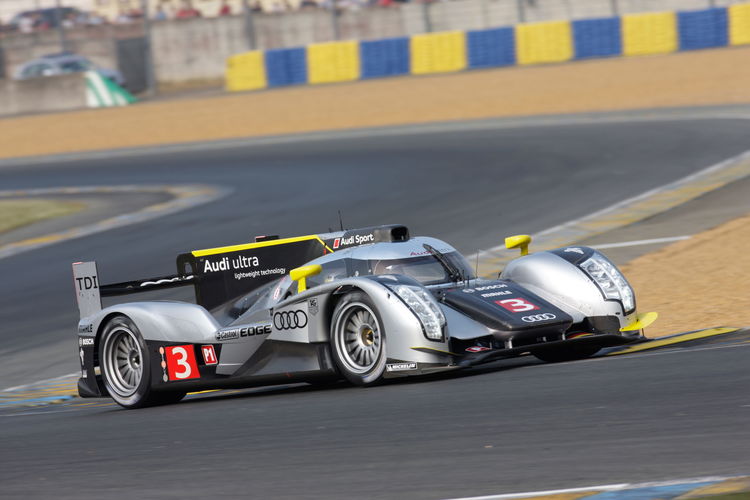 The Audi R18 TDI had a successful first public appearance at Le Mans. 24,987 enthusiastic fans witnessed how Audi Sport Team Joest prepared for the 24 Hour race (on June 11/12) on Easter Sunday with all three cars and drivers. The innovative sports car with its ultra lightweight technology set the two fastest times at the end of the test day which is back now.

Whilst it’s traditionally not about lap times on test day, much more significant findings matter for Audi after eight hours. The innovative diesel-powered sportscar was prepared very well for the demanding Le Mans track, all scheduled programs have been completed and the ten drivers adapted perfectly to the demanding circuit. Apart from the nine race drivers, test and reserve driver Marco Bonanomi was also behind the wheel and drove at Le Mans for the first time.

Despite Audi focussing on set-up work, Tom Kristensen set the fastest time of the day in car number 3. The eight-time Le Mans winner lapped the Sarthe circuit in 3m 27.687s. Last year’s winner Mike Rockenfeller only needed 0.128 more seconds in car number 1 for the 13.629 kilometers. Neither a rain shower in the morning nor a spin of the number 2 Audi R18 TDI hampered the progress. The work with tire partner Michelin was especially positive. Tom Kristensen, Allan McNish and Dindo Capello generated valuable data. Apart from setting up the car, all drivers had a common goal: for the first time since 1999, Audi contests the Le Mans race with a closed car. For the drivers it was also important to get to know the vision from the cockpit, to drive in realistic traffic and to practice driver changes in the pits.

On Easter Sunday, not only the upcoming Le Mans 24 Hour race was in the minds of Audi Sport Team Joest’s team members. Each of the three Audi R18 TDI cars carried two stickers on the rear wing that were styled according to Michele Alboreto’s helmet. They were in memory of the former Audi works driver who died on April 25 ten years ago.

Quotes after the test day

Dr. Wolfgang Ullrich (Head of Audi Motorsport): “We have prepared a comprehensive test program for all three cars. The weather conditions allowed us to complete all our schedules. We have achieved very good results. I think that we can put that to very good use in the Le Mans race. It was important to do a lot of kilometers here with the all-new car before the race weekend in June comes up.”

Dindo Capello (Audi R18 TDI #3): “We have worked very well for eight hours without a single problem. We have completed every aspect of our plan. We have learned many small things which will help us again in the next test. This was really very, very positive. I’m also eagerly awaiting the analysis of all data. Of course, there is always one aspect or another that can still be improved.”

Tom Kristensen (Audi R18 TDI #3): “It was perfect for the whole team to complete the test day with the new car. For me it was the first time since 2003 that I’ve sat in a Coupé. The efficiency and the work of Audi have really impressed me. You can really feel the aerodynamics and the car is very comfortable. Already now we have gathered valuable information. As a driver, I very much appreciate the six-speed gearbox. It fits well to the engine with its down-sized cubic capacity.”

Allan McNish (Audi R18 TDI #3): “There is no other circuit where you’ve got such long straights and consecutive long straights on the same lap. But there are also the high-speed sections through the Porsche curves and the Esses. It was very important here for us with the new R18 TDI to try to understand how the car would react on this type of track. We have found a good base set-up. Admittedly the circuit will change between now and June. But we have found a good base and a good confidence level. The chassis has been pretty consistent, the tires have been very good. We are on target but until we get to the race in June we are not going to see what everybody has got.”

Timo Bernhard (Audi R18 TDI #1): “It is very nice that there has been a test day again at Le Mans. This gave us a lot of possibilities to set the car up for this unique track. You can’t just simulate Le Mans somewhere else. You’ve got to drive on the track. To split the workload during the test between the three cars makes sense. The team result is important. We didn’t focus on lap times. It was important to gather kilometers and findings. We have tried different set-ups to see how the car reacts. That has worked pretty well. I can’t wait to drive here again.”

Romain Dumas (Audi R18 TDI #1): “That was a very constructive day. We’ve worked quite a lot. With three cars, we had to learn a lot. We have worked through a well-defined program. We’ve improved the set-up continuously throughout the day. Thus, the car was really easy to drive. Our performance was also very positive. This was what we had in mind. Plus we’ve got to know our new mechanics even better. We’ve also practiced driver changes today. I think that come qualifying day at Le Mans, we will be much better sorted-out than last year.”

Mike Rockenfeller (Audi R18 TDI #1): “It is great to come back to Le Mans after last year’s success. It’s nice that a pre-test is back and that we have the chance to test the Audi R18 TDI. For a driver, it’s also about getting used to the track again. It is fantastic to have this feeling of the speed through the fast corners. For us it was a good day. We’ve generated much data. This will be analysed to improve further. Then we should be well-prepared for the race.”

Marcel Fässler (Audi R18 TDI #2): “I’m very happy with the whole car. It felt super. I felt save and well in this car. In fast corners, the car was sensational, too. In Mulsanne, I once spun under braking and slid into the gravel trap. I didn’t want to make a mistake thereafter and approached the limit slowly again. When you look at the whole day, I’m very happy with our performance and with the things that we’ve tested.”

André Lotterer (Audi R18 TDI #2): “Since December, we’ve tested a lot with the R18 TDI. Now it had to show its mettle for the first time in the Le Mans pre-test. We wera all eagerly anticipating this day. For me, the car is very pleasant to drive. It is comfortable which is a big advantage at Le Mans. You can easily adapt and drive very soon very fast without having to care. Now we need to clock up even more kilometers up to the race.”

Benoît Tréluyer (Audi R18 TDI #2): “For the first time, we’ve driven the Audi R18 TDI at Le Mans. The car felt very pleasant: It’s easy to drive and you quickly gain confidence. Hence you’re quick out of the box even when conditions are tricky. Especially in fast corners, this is important. Bearing in mind those were our first kilometers with the R18 TDI at Le Mans, it is a very good basis.”

Marco Bonanomi (Audi R18 TDI): “I’m very happy after this day which was unique for me. A great thank you to Audi and the team for this chance. It was a nice feeling to drive at Le Mans as a rookie. I’ve done ten laps. The car felt very well. We now have reference data for the race. Now there are more test kilometers coming up. It is nice that I was allowed to help the team in preparation for this important race.”

Ralf Jüttner (Technical Director Audi Sport Team Joest): “We’ve had a pretty good test day. Plus we were lucky regarding the weather – there was only a little bit of rain. We were able to tick all the boxes of our working plan. And we have very good results. During its first outing at Le Mans, the R18 TDI behaved exactly as we had expected and hoped. A big part of our program was to work with the tires. As there is no other chance to drive at Le Mans, this was very important. This is always exciting before it kicks off. We have an excellent co-operation with Michelin. The tires work brilliantly. We were also able to complete the tasks of setting up the car and looking after the aerodynamics. There is a list of things which still need to be done but we can head back now with a pretty good feeling.”