Quotes after the race at the EuroSpeedway 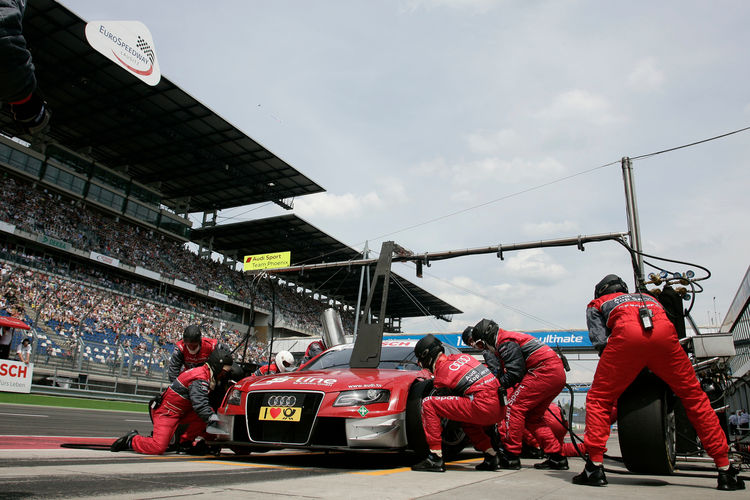 A collision on the starting lap cost Audi valuable points in the fight for the DTM title at the EuroSpeedway Lausitz. Quotes after the race.

Dr. Wolfgang Ullrich (Head of Audi Motorsport)
“As early as after qualifying we saw that we’d be having a difficult time. But what happened in turn three was a nightmare. Something like this mustn’t happen on the first lap, particularly not among brand colleagues. Now all we can do is look ahead and make sure that something like this never happens again. We’ll tackle this right away. Mike Rockenfeller’s performance was a positive aspect. As the best Audi driver, he managed to clinch fourth place and posted the fastest race lap.”

Mike Rockenfeller (S line Audi A4 DTM), 4th place
“I had a good start and got through well. I was running in fourth place and Gary (Paffett) was behind me. Then the safety car period came. At the end of it, Jamie was extremely slow in the penultimate turn. A huge gap to the two front runners opened up, we almost couldn’t see them any more. That was frustrating of course. On the first two sets of tires I had to fight a lot because Gary was on my heels and putting on a lot of pressure. On the third set of tires I was running really well and drove away from Gary. The team did a tremendous job. Both pit stops were superb. The strategy was right. It was a good race for me.”

Martin Tomczyk (Red Bull Cola Audi A4 DTM #6), 6th place
“I only gained my positions because three of my colleagues in front of me either retired or lost places. Obviously, that’s not good. I wasn’t able to attack today. I was only able to keep the pace of the others, but not to attack.”

Timo Scheider (GW:plus/Top Service Audi A4 DTM), 8th place
“We had a normal start. I made it through the first corner fairly well. After turn 2a, we filtered into the counter-straight. Then Prémat came shooting by on the outside and hit ‘Eki’ on the inside who in turn caught me. That put me in last place. The car was damaged but our pace was good. I bungled one of the pit stops by stalling the engine. At the second stop something got jammed at the left rear. I did manage to overtake seven people, which was fun – at least those that I passed on the track.”

Markus Winkelhock (Playboy/GW:plus Audi A4 DTM), 10th place
“At the beginning I got away very well and drove toward the inside. Ninth place up to the safety car period was quite okay. My pace was better than it had been before throughout the weekend. The car was more fun as well. We managed to make this step at a late stage of the game but I’m going home with a better feeling and to the next race than I would have if the weekend had ended the way it began. The strategy wasn’t perfect. I could have been in front of Schumacher. But I’m pleased to have moved forward to tenth place from 15th.”

Oliver Jarvis (Tabac Original Audi A4 DTM #2), 11th place
“I had a first-rate start. I was driving on the inside into the first turn. I think I was running in sixth or seventh place. But then ‘Eki’ and Prémat got into each other’s way. They spun in front of me. I had to stop and my car was hit in the rear in process, which damaged the body. A piece of the bodywork was scraping the left rear wheel. For about 200 meters I was overtaken by everyone until this part of the body broke off. Even after that happened, it was a difficult race. The car was no longer in balance. I had to battle all the way to the end and wasn’t fast enough any more.”

Miguel Molina (Audi Bank A4 DTM), 13th place
“The start was very good. In the third turn I damaged the front of my car. I touched a rival. As a result, the car lost a lot of its aerodynamic effect at the front. That made the race pretty difficult. In the end, the only positive thing is that I finished. Now I’m positively looking ahead toward the Norisring.”

Katherine Legge (Glamour Audi A4 DTM), 14th place
“Unfortunately, I wasn’t able to see the lights at the start. All the others drove away, some of us started with a delay. Then the big chaos broke out. I decided to take things easy and to find a clear passage. Unfortunately, my tires picked up so much dirt during the safety car period that I wasn’t able to do anything on the next 10 to 15 laps. So it was just about making up lost ground again at that point. During the final stint my times were pretty good. We would have had to be good in all phases of the race to achieve a better a result.”

Mattias Ekström (Red Bull Audi A4 DTM), retirement (accident)
“That was a very short race. I had a poor start. But after the first turns I thought everything was quite okay. Then the rear of my car was hit and I spun. I thought this wouldn’t have any major consequences except that my car was stopped. But then David Coulthard hit me as well.”

Alexandre Prémat (TV Movie Audi A4 DTM), retirement (accident)
“That was a catastrophic race because, unfortunately, there was an accident on the first lap. I apologize to ‘Eki’ and to Audi. I thought I had everything under control. But that wasn’t the case. That’s a shame for him, for me and, above all, for Audi.”

Hans-Jürgen Abt (Team Director Audi Sport Team Abt Sportsline)
“We’re all totally disappointed. Our pace wasn’t so bad. But if you don’t have the drivers under control among each other you’ve got a difficult time. It doesn’t help to lose both of our best cars as early as on the first lap. With Martin (Tomczyk) we still made the best of the situation. He moved forward from tenth to sixth place. We couldn’t achieve a lot more than that. Timo Scheider moved forward from the last to eighth place. He scored one point.”

Ernst Moser (Team Director Audi Sport Team Phoenix)
“I’m very happy for ‘Rocky’ and for the team about having provided the best Audi driver with a fourth-place finish. But we do have very mixed emotions. If we eliminate ourselves and, what’s more, if one of my cars is involved, that makes me very angry. The overall results could have been much better for Audi.”

Arno Zensen (Team Director Audi Sport Team Rosberg)
“Markus’ (Winkelhock) car was only running well in the race. Considering this, he showed an incredible performance. He was driving sensational times at the end. Katherine (Legge) had some problems in the first third of the race and was even in the gravel trap once. But she was driving good lap times at the end as well. She was consistently quick. She could have done better if she hadn’t lost so much time in the early stages.”