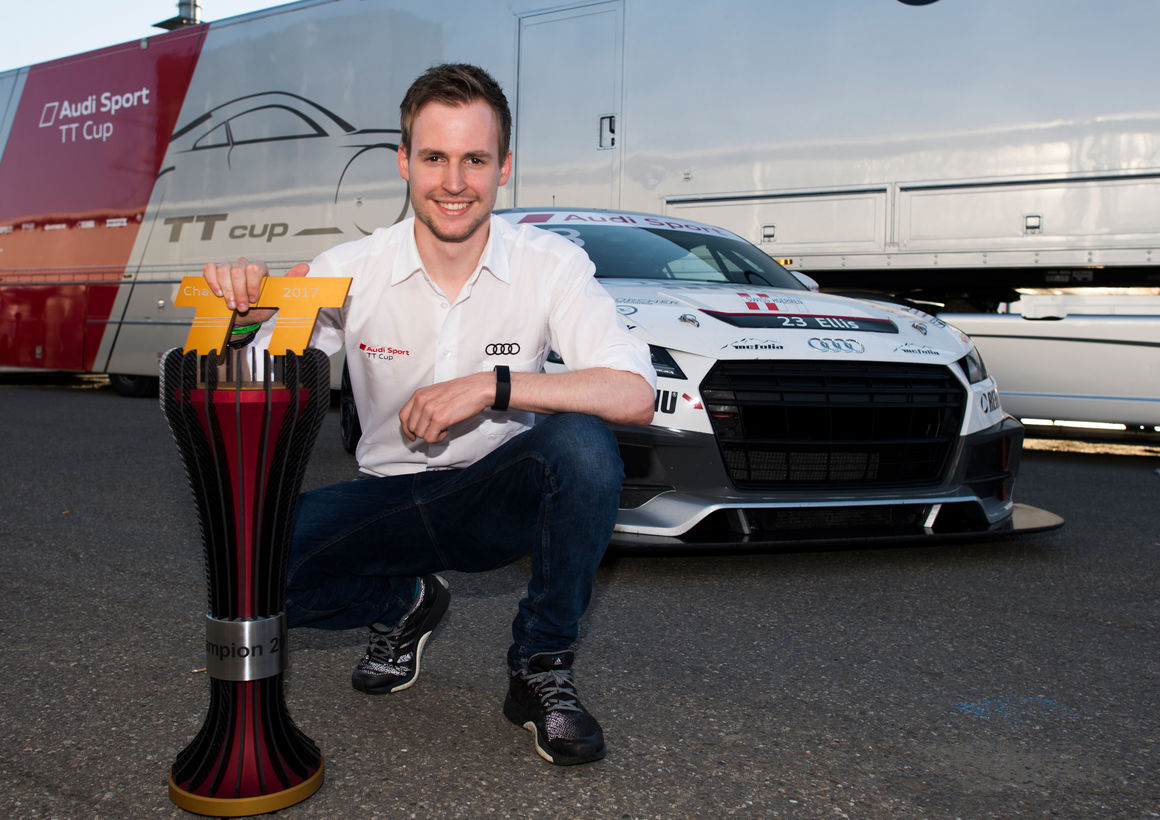 Philip Ellis has won the 2017 Audi Sport TT Cup, so making a decisive step in his life. Following his beginnings in racing, he interrupted his fast career to focus on his studies and only returned to the track with Audi. Thanks to a bonus of 150,000 euros for winning the Audi Sport TT Cup, he now has perfect prerequisites for continuing his career.

Congenial, quick, eloquent and tactically clever: Philip Ellis has many traits that make him cut out for motor racing and its media environment. He entered the 2017 season as one of only two campaigners with a year of experience in the Audi Sport TT Cup under his belt and achieved an advantage early on. In Mikel Azcona, though, he soon had a strong rival. Both battled for the title up until the finale at Hockenheim. After five victories this season, Ellis crowned himself champion early – exactly five days after his 25th birthday.

“This has been the greatest success in my career to date,” he enthused. Born in Munich, Ellis grew up there until the age of six before moving to Switzerland. Today, he lives in Baar in the Swiss canton of Zug. His father hails from Wales, so Philip Ellis chose to have the British flag emblazoned on his 340-hp race car and his racing suit. When asked whether he feels more like a Swiss, Briton or German, he prefers to answer: “I’m a European.”

Before entering motorsport, Ellis was playing ice hockey for ten years in his youth. “I was a forward in the junior team of EV Zug because I wasn’t tall enough for the center and defense positions,” says the sportsman who, being 1.74 meters tall, has an ideal physique for a race driver. Following private practice days in a single-seater race car, the budding driver entered motorsport in 2011 with no racing experience under his belt whatsoever and went on to win the Swiss LO Formula Lista. A year later, his career took him into the Formula 3 Euro Series. “Unfortunately, that was less than perfect,” he admits in retrospect. Afterwards, the talent’s activities subsided. “I don’t come from a family of racers and had no contacts allowing me to continue.” Instead, he focused on his studies of international management, currently enrolled in his fifth semester at Lucerne University of Applied Sciences.

When Ellis met race driver Levin Amweg who was contesting the first season in the Audi Sport TT Cup the Swiss recommended the one-make cup to him as an opportunity to resume motor racing. “I learned a lot in my first season, in 2016,” the new champion says looking back. “I analyzed every weekend in detail, watching onboard footage and looking at data, and going through the races lap by lap.” One of the keys to success: the tires from partner Hankook. “You have to warm them up well. The pressure is crucial because it changes during the race when the tires warm up.” The up and coming driver uses the possibilities of the virtual world as a complement. “I’d often spend several hours a day trying out various track racing lines in the simulator just for fun while simultaneously watching onboard footage from qualifying sessions of the 2016 season to give me an impression of maximum realism.”

But there was more involved than just controlling the car. “Philip is clever enough to be able to read racing situations and to soft-pedal now and then,” says three-time Le Mans winner Marco Werner who assists all the juniors as an instructor. He rarely made mistakes and only retired once due to his own fault. In eleven of 13 rounds, he mounted the podium and a 24-point advantage was a clear result.

His goal: “Obviously, I’d like to become a pro in the long run,” says Philip Ellis. “With Audi I revived my career. Thanks to the promotional package, I now have an opportunity to move up into GT racing with this brand. I’m already excited to see what the 2018 has in store for me.”