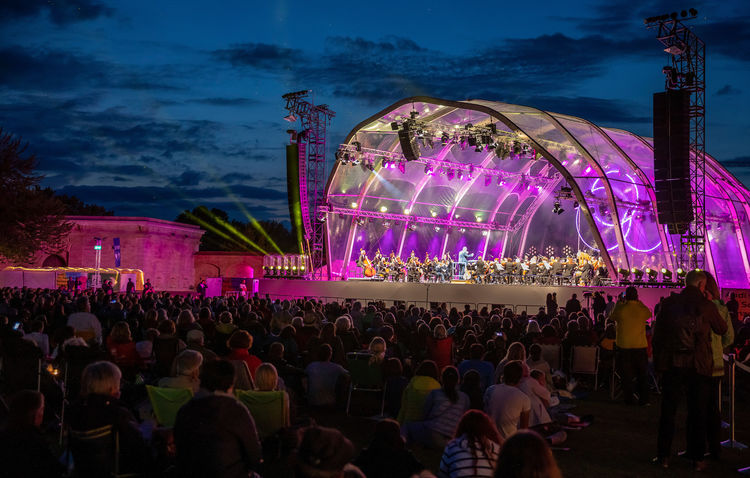 This year’s Audi Sommerkonzerte are taking place between 1 and 4 July 2021 as an open-air festival in Ingolstadt with the motto “Lights of Europe.” On 2 July, worldwide audiences can also experience the Audi Sommerkonzerte in digital form. At the invitation of the artistic director and star violinist Lisa Batiashvili, high-caliber artists will gather in Ingolstadt to celebrate the cultural diversity of Europe through their delight in playing and experimenting. Audi invites audiences to experience together the return of the arts to the stage. Admission to all concerts will therefore be free this year.

In view of the current pandemic, for the first time the Audi Sommerkonzerte 2021 will be held entirely in the open-air with audiences. Audi and the artistic director Lisa Batiashvili are convinced that music should be back on stage, now of all times. “Even in times of uncertainty, we maintain our commitment to culture and find creative ways of taking music to the people. In 2021 we are taking the word “Sommerkonzerte” – summer concerts – literally: we are going out into natural surroundings and putting the Klenzepark on the web for the first time,“ notes Sabine Maassen, Board Member for Human Resources and Organization.

The courtyard of the Triva Tower will serve as a new concert stage. The opening and conclusion of the festival will be held there, with artists including the globally known mandolin player Avi Avital (1 July, 6 pm) and the vocal ensemble LauschWerk (4 July, 8.30 pm). The big stage in the Klenzepark, known as the venue for the Audi Klassik Open Air concerts, will be the main stage for the Audi Sommerkonzerte. Visitors can enjoy music together there once more at a total of four concerts – with ensembles including Philharmonix (4 July, 3 pm), the Georgische Kammerorchester Ingolstadt (Georgian Chamber Orchestra; 3 July, 8.30 pm) and the Audi Bläserphilharmonie (Audi Wind Philharmonic; 3 July, 11 am). The Audi Sommerkonzerte will also be a guest at the Landesgartenschau (State Garden Show) for the first time, when Till Brönner and band will perform pieces from his album On Vacation (1 July, 8.30 pm).

One of the highlights is a live stream: “Let’s celebrate music!” is the motto for Lisa Batiashvili’s concert with the legendary Orchestra dell’Accademia Nazionale di Santa Cecilia - Roma and Sir Antonio Pappano, marking the return of culture to the big stage (2 July, 8.30 pm). The concert will be streamed live to the worldwide web from the Klenzepark in Ingolstadt, moderated by the world-class horn player Sarah Willis. Following this, Paul van Dyk, one of the world’s best-known DJs, will make the perfect link between classics and electro with his electronic dance music. The venue of this all-digital concert is also unusual: the EMV Hall with its futuristic-looking absorbers, where at other times Audi tests the entire electronics of its vehicles in relation to electromagnetic waves – music that transcends borders and connects people in Europe and all over the world in a live stream.

With this hybrid event, Audi is making a link to the digital success of last year’s streaming of a concert: the aim is that people across the world can participate in the Audi Sommerkonzerte in Ingolstadt, so that classical music, one of Europe’s greatest cultural treasures, is available to a wide audience.

The communication, too, will be digital: with visual storytelling for the first time in the online magazine Lights of Europe. At www.sommerkonzerte-digital.de, stories, background reports and portraits of the artists associated with the festival will be published weekly in German and English. For readers who are on the move, the presentation has been optimized for mobile devices.

Advance registration and ticket reservation begin on 17 June, 10 am, at www.sommerkonzerte.de

Audi Sommerkonzerte 1990 – 2021
Since they were founded in 1990, the Audi Sommerkonzerte have drawn more than a quarter of a million visitors to the concerts. In cooperation with the City of Ingolstadt, since 2009 the Klassik Open Air concerts in the Klenzepark have been part of the festival. From 2014 to 2016 Kent Nagano was the artistic director of the “Vorsprung Festival” within the Audi Sommerkonzerte. Since 2019 Lisa Batiashvili has been artistic director of the Audi Sommerkonzerte. Under the motto “Together for Music”, the 30th anniversary of the festival took place on the Audi works site for the first time with digital distribution. Via the company’s social media channels, four concerts were streamed live and made available as a recording on the web free of charge for 72 hours. With over 72,000 viewers from more than 30 countries and approximately 9,000 interactions on YouTube, LinkedIn, Twitter, and Audi MediaTV, the response was overwhelming. In 2021 the Audi Sommerkonzerte are taking place in analog and digital form, and in this way can be enjoyed by a regional and global audience.