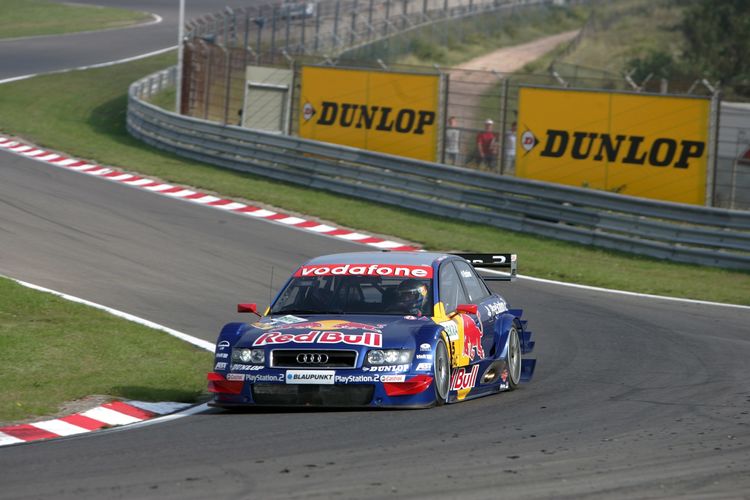 In the DTM’s eighth round of the season, an Audi A4 DTM will yet again be starting from the pole position. Leader of the standings Mattias Ekström was the quickest driver in the singled timed lap (“super pole“), thus clinching the best position on the starting grid for the third time this year. The Audi A4 DTM in its debut season today even achieved the best qualifying time for as much as the fourth time. Martin Tomczyk, Christian Abt and Tom Kristensen – securing the fourth, fifth and sixth places on the grid respectively – complemented the strong performance of the Audi teams as a whole. Today’s qualifying results mean that on Sunday at 2 p.m. local time, all four Audi A4 DTM cars fielded by Audi Sport Team Abt Sportsline will be starting from the first three rows. Emanuele Pirro of Audi Sport Infineon Team Joest – with an eleventh-place finish in the qualifying – barely missed the super pole by 85 thousandths of a second. Team-mate Frank Biela will be starting the race from position 14.

Mattias Ekström (Audi Sport Team Abt / Audi A4 DTM #5)
1st place “super pole“, 1m 34.051s
“My car was really good, but in the super pole the grip level was a lot lower than during the qualifying. After two, three corners I started to get a bit worried. I gave everything, and that was enough for taking pole. I’m very happy about this, because I think that Audi have really deserved the pole position here. For tomorrow, I’m very optimistic, because we also have a very good set-up for the race.“

Martin Tomczyk (Audi Sport Team Abt / Audi A4 DTM #6)
4th place, ”super pole“, 1m 34.710s
“In the super pole I was seven tenths slower than in the qualifying and not at all happy with my time at first. But in the end, I managed to achieve a good result after all, because – somehow – everyone was having problems building up grip for the tyres. The fact that two Mercedes cars will be between Mattias and myself will make things very exciting tomorrow.“

Christian Abt (Audi Sport Team Abt Sportsline / Audi A4 DTM #11)
5th place, 1m 34.813s
“In my super pole lap I was surprised that there was no grip at all in the first sector. I started sliding about quite a bit and had to pull myself together to keep from making any mistakes. I kept my calm and sacrificed two, three tenths that way. Nevertheless, I’m satisfied with my qualifying result. And in the race, anything’s possible.“

Tom Kristensen (Audi Sport Team Abt Sportsline / Audi A4 DTM #12)
6th place, ”super pole“, 1m 34.908s
“My car has been really good here during the whole weekend so far, and I’ve always been at the front of the field, twice even at the very front. In the super pole, the track was a lot more slippery. I had a couple of slides, and that cost me a lot of time. My crew would have deserved a better starting position. But we know that we have a very good car for the race.“

Emanuele Pirro (Audi Sport Infineon Team Joest / Audi A4 DTM #44)
11th place, 1m 34.511s
“My thanks go to the team that changed the prop shaft very quickly this morning. Although I missed almost the entire free practice session, I was able to go back out on the track just before the end. This was very important because we had changed the car almost completely from the way it was yesterday. Unfortunately, we missed the super pole – once again – by almost nothing. But considering the circumstances, the qualifying result is quite okay.“

Frank Biela (Audi Sport Infineon Team Joest / Audi A4 DTM #45)
14th place, 1m 35.060s
“After my tenth place in the free practice session, unfortunately I wasn’t able to get it right completely in the qualifying. The first set of tyres wasn’t all that great. With the second set, the lap started off very well, but then I made a shifting error. During the third outing, I was too slow in the first sector.“

Hans-Jürgen Abt (Team Director Audi Sport Team Abt Sportsline): “I’m very happy with the team result, we’ll have all four cars starting from the first three rows tomorrow. Perhaps there would have been a little more in it for us, but the super pole is always something very special in the DTM. ‘Well done’ to Mattias: once again, he got the best out of it for Audi.“

Ralf Jüttner (Technical Director Audi Sport Infineon Team Joest): “For some reason we’ve not been able to unlock the door to the super pole yet. We had been hoping that Emanuele’s time would be enough to get into the top ten. But in the end there was just under a tenth of a second missing. Starting places eleven and 14 aren’t all that bad though. I’m hoping that we’ll be driving a good race, bringing both cars across the finish line and scoring some points.“

Dr Wolfgang Ullrich (Head of Audi Motorsport): “Today, we have achieved the best result of the season so far for the Audi squad: pole position, four cars among the top six, and the two Joest cars just barely missing the super pole. In the single timed laps there was a little luck involved today as well, because the track conditions had changed significantly after the qualifying. I have no doubt that the colourful mix on the starting grid will make for an exciting race tomorrow.“