Flashback: Le Mans 2013 and the Audi win under unequal prerequisites 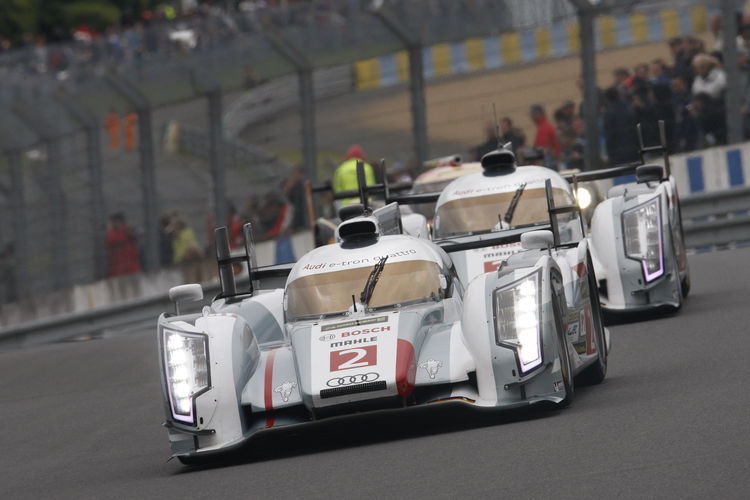 In two weeks from now, the Audi R18 e-tron quattro will be challenged to claim its fourth consecutive victory in the Le Mans 24 Hours, with Audi competing against three manufacturers. At the same time, this will be a battle of the concepts: diesel vs. gasoline engines, kinetic vs. thermal energy recuperation and electromechanical vs. electrostatic vs. electrochemical storage. This brings back memories of the race two years ago.

In June 2013, a battle between the hybrid concepts dominated the race from lights to flag for the first time. Events before the race already gave a taste of how tough the confrontation would be. The officials repeatedly changed the regulations – to Audi’s disadvantage. The changes made to engine power, fuel tank capacity and duration of the pit stops consistently produced new advantages for challenger Toyota.

“These decisions by the endurance racing commission came as a surprise to us,” says Chris Reinke, Head of LMP at Audi Sport. “The restrictions imposed on Audi’s TDI power-plant were tough. Factually, they led to the reversal of an experience everyday drivers are familiar with, as the range of our TDI race cars was suddenly lower than those of our opponents using gasoline engines.“ As a result, the spectators saw that Audi generally had to pit for refueling two laps earlier. Loïc Duval, Allan McNish and Tom Kristensen in their victorious Audi headed for the pits 34 times across the entire racing distance. Pursuer Toyota required only 30 refueling stops.

Rain made for additional uncertainty, just like the total of eleven caution periods following incidents. But the Audi drivers kept a cool head even in heavy rain showers in the race’s final stage, drove fast and impeccably, and saw the checkered flag on clinching their twelfth Le Mans victory with a one-lap advantage over the best Toyota. Their team-mates Lucas di Grassi, Marc Gené and Oliver Jarvis in the number ‘3’ Audi ultimately bumped a second Toyota from third place and, as a result, secured a podium finish.

At night, the Audi drivers benefited from Matrix LED headlights that illuminate the corners particularly well. An electronic control unit switches the individual headlight LEDs on and off depending on the situation or dims them to keep from dazzling other drivers. Two weeks after the race, the brand announced that the A8* would be the first model to be equipped with Audi Matrix LED headlights – another example of technology transfer from racing.