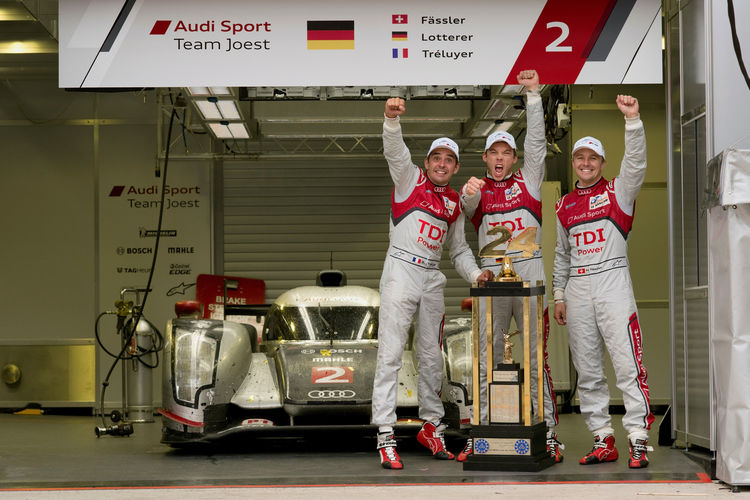 Audi recorded its tenth victory in the 24 Hours of Le Mans with ultra lightweight technology, an innovative V6 TDI engine and the first ever use of full LED headlights. The most important facts of a memorable race:

249,500 spectators witnessed Audi’s tenth victory at the 24 Hours of Le Mans. As a result, the brand with the Four Rings now holds second place alone in the all time winners list of the world’s most important endurance race. Only sister company Porsche has more wins (16 from 61 races). Audi’s winning ratio is an impressive 76.9 per cent.

Audi scored a podium result in all 13 Le Mans events – ten of these factory efforts. In 42 starts since 1999 Audi recorded 32 finishes (76.2 per cent), ten of these wins, five second places and nine third places. Audi achieved 24 of a possible 39 podium positions (61.5 per cent) in the process.

For Reinhold Joest’s team it was the twelfth victory in the 24 Hours of Le Mans, the eighth with Audi. If you include the wins scored by Dauer Racing (1994) and Bentley (2003), in which the team was also involved, Joest Racing is credited with 14 Le Mans wins.

The fastest lap set by an Audi R18 TDI in the race (3m 25.289s) was more than a second faster than the best from Peugeot (3m 26.298s). André Lotterer even undercut Benoît Tréluyer’s pole position time from qualifying in the process.

The Audi R18 TDI was superior to its rivals at Le Mans and specifically in the fast corners. In the final sector of the circuit, to which the famous “Porsche Curves” belong, the Audi was eight tenths of a second faster than the best Peugeot.

The highest speed recorded by an Audi R18 TDI in the race along the Hunaudières straight was 336.4 km/h.

The lead changed hands a total of 46 times during the race. Four different cars led the race. Audi topped the leader board for 261 of the 355 laps. The winning car was credited with the most laps (246) in the lead.

The triumphant trio completed the entire race distance with only nine sets of Michelin tires. The eighth and final tire change was only required because the left rear tire lost air. Benoît Tréluyer completed the longest stint on the same set of tires – 54 laps (five stints).

The 3.7 liter V6 TDI in the Audi R18 TDI consumed an average of only 37.08 liters of diesel per 100 kilometers and therefore less than 40 liters for the first time since Audi competes at Le Mans – helped in part by the long safety car phases.

Marcel Fässler is the first Swiss driver in history to win the race.

The three victorious Audi drivers Marcel Fässler, André Lotterer and Benoît Tréluyer can boast an impressive record: up to now they started twice for the factory Audi team at Le Mans, mounting the podium on both occasions. The first Le Mans victory for all three follows last year’s second place.

Benoît Tréluyer was only the fifth driver in Le Mans history to have won the race from pole position (awarded since 1963) and the Audi R18 TDI only the seventh car to win from the pole. A car with the start number “2” won for the sixth time since 1923.

It was the eleventh victory at Le Mans for Head of Audi Motorsport Dr. Wolfgang Ullrich. The Austrian was also significantly involved in Bentley’s win at the 24 hours in 2003.

It was the 28th Le Mans victory for a German automobile manufacturer and also the 28th for a closed car. A diesel powered car won for the sixth time, Audi TDI technology lays claim to five of these.

It was the 20th Le Mans victory for Audi tire partner Michelin, the 14th in succession and the 10th with Audi.

The number of retirements in the 79th running of the 24 Hours of Le Mans was particularly high: only 28 of the 56 cars that started reached the finish.