{{ activeItem() }}
Facebook
02/02/23
Sunshine, race cars and fans: Downtown Bathurst for the annual “Town to Track” parade of the 2023 Bathurst 12 Hour. Thank you to all of the fans who came to say hello and see the race cars and drivers. All seven of the Audi R8 LMS entries were there enjoying the sunny weather. More to come as we prepare for the race on Sunday. >> audi.com/GT3 #PerformanceIsAnAttitude #B12hr
02/01/23
Our tally with the Audi R8 LMS at the Bathurst 12 Hour includes three overall victories: 2011, 2012 and 2018. The 2023 edition of the once-around-the-clock endurance classic at the Mount Panorama Circuit will be taking place this week from February 3–5. >> audi.com/GT3 #PerformanceIsAnAttitude #B12hr
01/31/23
Audi RS Q e-tron* vs. Audi Sport quattro S1 with Stéphane Peterhansel and Mattias Ekström in Sweden. #FutureIsAnAttitude #AudiDakar #Dakar2023 #RSQe-tron #ROCSweden -------------------- *Audi RS Q e-tron: This vehicle shown here is the Rally Dakar vehicle that is not available as a production model. Closed course, professional driver. Do not attempt.
01/30/23
On the way to the Mount Panorama Circuit with a blast from the past: Two of the entries from MPC, Melbourne Performance Centre, will be boasting new retro Audi Sport liveries at the Bathurst 12 Hour this week: Audi R8 LMS #74 and #777. The two cars include five Audi Sport drivers for the endurance race that will be taking place from February 3–5. 𝗔𝘂𝗱𝗶 𝗦𝗽𝗼𝗿𝘁 𝗧𝗲𝗮𝗺 𝗠𝗣𝗖 #𝟳𝟰 🇮🇹 Mattia Drudi Fanpage 🇩🇪 Christopher Haase - Fanpage 🇨🇭 Patric Niederhauser 𝗧𝗵𝗲 𝗕𝗲𝗻𝗱 𝗠𝗼𝘁𝗼𝗿𝘀𝗽𝗼𝗿𝘁 𝗣𝗮𝗿𝗸 𝗧𝗲𝗮𝗺 𝗠𝗣𝗖 #𝟕𝟕𝟕 🇨🇭 Ricardo Feller 🇩🇪 Christopher Mies 🇦🇺 Yasser Shahin #PerformanceIsAnAttitude #B12hr
Audi Sport on Facebook 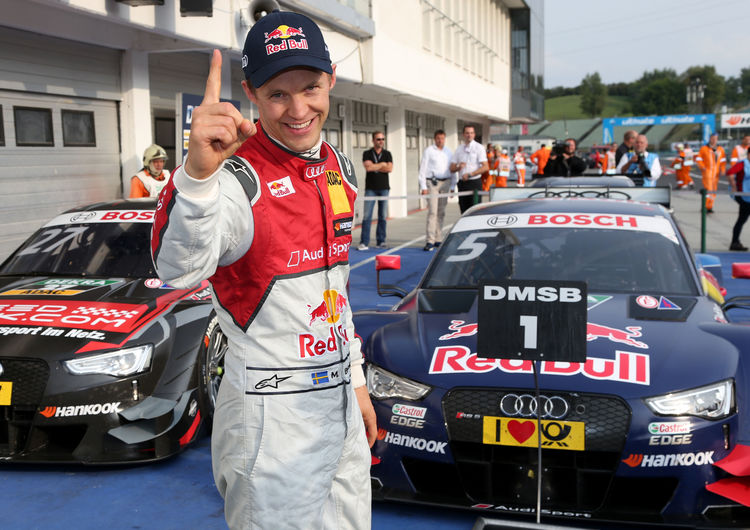 39,500 spectators (throughout the weekend) witnessed a strong performance by the Audi squad in positions one to six on Saturday and a one-two result on Sunday. Following the exclusion of Daniel Juncadella (Mercedes-Benz) and Marco Wittmann (BMW) from the classification, two Audi drivers – Edoardo Mortara and Jamie Green – before the finale at Hockenheim still have chances of clinching the drivers’ title. In the manufacturers’ and teams’ classifications, Audi clearly ranks at the top. Quotes following the DTM’s visit to Hungary.

“First of all, big praise goes to our technical crew: The Audi RS 5 DTM was the measure of all things at Budapest. One shouldn’t forget either that we’re still racing with the same car we did three years ago, while a number of concessions have been made to our two competitors in the meantime. All the more remarkable is this strong performance. I think for the DTM to return to Budapest paid off as well. Especially on Sunday, we saw a great crowd. We’re also pleased to have seen so many employees from our plant in Győr at the event. They witnessed two dominant Audi victories. And we managed to postpone the title decision to the finale at Hockenheim. The fans can look forward to a thrilling showdown at which we’re going to give everything once more.”

“In terms of performance, this was one of the best weekends we’ve had in the DTM to date – particularly this season. That’s why it’s all the more frustrating that we were able to profit from this only to a limited extent on Sunday. Following our 1-2-3-4-5-6 results on Saturday we clinched a one-two and extended our lead in the manufacturers’ and the teams’ standings – but not to the extent we could have. It was extremely frustrating that Edo (Mortara) and Jamie (Green) were taken out of the race so unfortunately in turn one. Edo’s start wasn’t optimal, but he still would have had good chances of finishing far at the front. Now we need a really strong finale at Hockenheim. We know that we’re fast there. We’re in a good position in the manufacturers’ and the teams’ standings – and in the drivers’ classification, the final chapter hasn’t been written yet either.”

“On Saturday, we were still struggling to some extent. On Sunday, things were going better and in qualifying, I really felt comfortable in the car. The race was very easy for me. I’m happy: This was a nice ending of my DTM season. However, it does feel strange not to travel to the finale at Hockenheim. I really felt sorry for Edo (Mortara) on Sunday. For his title race, scoring no points was a setback. But I know that he’s a real fighter and is going to battle up to the last meter at Hockenheim. And obviously, I’m going to watch the two final races at Hockenheim from the World Rallycross Championship at Buxtehude.”

“We were fast and extremely strong from the beginning this weekend. Saturday was incredible. Everything was going perfectly in free practice as well as in qualifying. My start wasn’t brilliant, but good enough to maintain the lead. Afterwards, I was able to control my advantage and take it easy on the tires and the brakes. On Sunday, I had to battle hard for pole position. I only advanced from position six to position one at the last moment. That’s why the race was all the more bitter. I didn’t have a good start. Subsequently, I was sandwiched between Wittmann and Green. A rim was damaged in the process and on lap one, I suffered a few more hits. That’s very disappointing because we could have won this race too. Now I’m traveling to the finale with a 14-point deficit. Anything’s possible and we’re going to battle up until the very end!”

“On Saturday, things went really well and I was happy with position two in qualifying and in the race. For Audi in total, it was a strong result. In qualifying on Sunday, I was obstructed during my second stint on new tires and didn’t have a clear lap. Judging by the sector times, I could probably have ended up closer to the front – at least in position two. Finally, in the race, I made a good start. Unfortunately, Wittmann then decided to pull over to the right on the start-finish straight. First, he collided with Edo (Mortara) and subsequently hit my car too. It was damaged so heavily that I couldn’t continue to drive. Consequently, the race was over for me after just 400 meters, which is very frustrating.”

“For me, it was a very good weekend. Sixth on Saturday and in position two on Sunday. I’m very happy about that. I hope this was the starting signal for another step ahead. And of course I’m happy for my team. Everyone has been doing a great job during all the races. They deserve it. In the end, it was a great relief that it worked out again and that we managed to take home a lot of points.”

“Saturday was very good. Sunday seemed promising too – until turn one. There was chaos and I wasn’t able to avoid being hit by the other drivers. Now I’m looking forward to the last race. Hockenheim has always been good for me. Anything’s still possible for Audi in the championship. We intend to work hard now and take a few trophies to Neuburg.”

“Audi was very strong this weekend. On Saturday, I was basically very happy with position four in qualifying and in the race. With an impeccable lap, even position three on the grid might have been possible and a podium in the race. On Sunday, it would probably not have been enough to clinch the top spot in qualifying, but without (Felix) Rosenqvist at least a better result would have been possible on the second set of tires. And in the race we could obviously have advanced even more. Moving from 16th to tenth was good. The pace was right. Plus, we finished in the points twice. For our season so far, we can be very happy with that.”

“Obviously, I’m pleased to take the ten points home from Saturday. My qualifying performance wasn’t good this time. It could have been a little better on Sunday. The race then was one to forget. If chaos breaks out in turn one, you simply need fortune to finish. And that’s what we didn’t have. Now, the focus will be on ending the season at Hockenheim with a highlight.”

“We saw a very good overall performance by Audi this weekend and another improvement by Audi Sport Team Phoenix. Mike (Rockenfeller) and I scored more points at Budapest than in the whole season so far. That’s why we’re very happy with the development. Unfortunately, it’s been too late in coming. But, obviously, it’s better if things do work out at some point than having a whole year when it doesn’t. I had two decent races. In terms of lap times, the second race was even better than the first one. That’s what we’re taking home and are now looking forward to the weekend at Hockenheim.”

“Two pole positions, two victories and the lead of the teams’ championship recaptured: Everyone in our team can be very proud of this. The squad did another top-class job again this weekend under high pressure and postponed the championship decision to the finale at Hockenheim. Obviously, it’s painful that Edo (Mortara) remained without points on Sunday and that he’ll be traveling to Hockenheim with a 14-point deficit instead of as the leader. But those who know us know that we’re not giving up. We’ve been showing this year that we’re the strongest team in the DTM. That’s why we intend to clinch the trophy for it at Hockenheim. And our colleagues in Munich shouldn’t count Edo out either.”

“I’m very, very pleased with our performance. We finished in the points with both cars. This really deserves credit because we’re coming from the far rear. The results in race one were a huge motivation boost for the whole squad. You could already see that with the pit stops in the second race that were the second- and fourth-fastest in the entire field. On Sunday, we’d have liked to show even more, but then qualifying didn’t work out completely. Our race speed was good though and we put both cars in the points again. Hopefully, we’ve shaken off all the misfortune of the previous races. We’re traveling to Hockenheim with fresh courage and are going to give everything for Audi to win all three championships.”

“On the whole, we’ve had mixed emotions this weekend. The second place clinched by Jamie (Green) on Saturday was obviously great. It’s a shame he hit traffic in qualifying on Sunday. Otherwise he could have advanced even more. That his race was over as early as on lap one was obviously an extreme shame. Instead, we were happy for Adrien (Tambay), who gave us another podium on Sunday. So, in that respect it was a step in the right direction for the teams’ championship. We may possibly still take third place. We’re going to see how that goes at Hockenheim. And with Jamie we even still have a small chance in the drivers’ classification.”