“Design has to stir emotions” 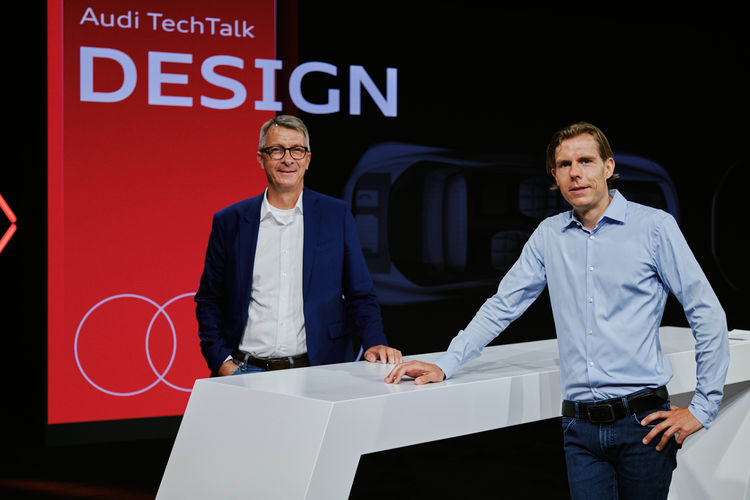 Audi Design is starting with a new pair of leaders for exterior and interior design in the future: Norbert Weber has been the head of Interior Design since October 2020 and Philipp Römers has been leading Exterior Design since March of this year. Together with head of Design Marc Lichte, they want to define the direction of the premium brand. It is a huge challenge, given the technological sea change due to electromobility, digitalization, and automated driving. After their first few months, they are sitting for a joint interview for the first time.

Mr. Weber, Mr. Römers, you are new to your positions, but not new to Audi. What connects you to the company with four rings?

Philipp Römers: I’ve been with Audi since 2014 and during that time, I have headed one of the Exterior Design studios. Seven years with a lot of great projects and my personal highlight: the Audi e-tron GT.

Norbert Weber: This is my second time. I was with Audi previously from 2007 to 2015, when I was head of Interior Design and the Design Studio in Beijing. A lot of familiar faces, a lot of new ones – a fantastic team that welcomed me here to the Design Center in Ingolstadt.

In all, 450 creative people from 25 countries work together in Audi Design. As lead designers, are you still at the drawing board yourselves?

Weber: I play the organ's keys now and then, but mostly I pull the stops. I see my role as a leading creative figure like this: I set the direction and orchestrate collaboration for the teams. I’m the one who motivates and encourages and, in isolated cases, also makes modifications. Sometimes we look at a model that’s almost finished – be it in clay or in the form of VR data – and decide that something still isn’t consistent. When that happens, I also pick up a pencil and sketch a few details about the particular element. Usually a few quick black lines on a white background are enough and I reach a solution. The biggest challenge is always to stop drawing again once I've started.

Römers: It's the same with me. As a designer, I can’t imagine working without a pencil at all. I have sketchbooks lying all over the place in my office and at home. I take them out during discussions so that I can also get an image, a feeling for a particular project. But that doesn’t mean that the finished product will look like that. It’s a rough direction that will be superseded in the next step by more creative and substantially more detailed drafts. At Audi, we have top concept designers on board for that. To put it briefly, we could say that design is always a team effort.

For a lot of people, inspiring design is a crucial selling point. Does that apply more to the exterior or the interior today?

Römers: The very first thing that people who are interested come into contact with is still the exterior. It has to arise desire. Ultimately, the first impression is decisive with respect to whether someone stays or just walks away, zooms in on their screen or quickly keeps browsing. Ideally, aesthetic form and function are combined. Specifically with electromobility, we need, for example, streamlined silhouettes that help increase range. They can be extremely attractive, as the e-tron GT shows.

Weber: The objective of stirring emotions with design then transfers seamlessly into the interior. The design of the interior is increasingly becoming the key element when people make purchasing decisions. What digital possibilities does my car offer me? What concrete benefits does the networking provide? Questions like these determine what stirs interest.

Does that mean that the interior is becoming the new power center of the whole car?

Weber: Digitalization and, above all, automated driving are undoubtedly making the interior the center of attention. We want to design our models from the inside out in the future. Nonetheless, we see the design process as a whole: ideas are created jointly and problems are solved jointly. At the end of the day, that ensures a consistent overall result.

Römers: That basic understanding is extremely important for us. In the past, we usually designed the outer skin first and then looked at whether the interior and the passengers fit well. Automated driving is a new paradigm shift in that respect. If the actual task of driving ceases to apply, new possibilities arise.

What are the consequences of this change in mindset for your work?

Weber: The most important thing is and will remain creativity. But we use the possibilities that digitization offers even in the design process itself. It has helped us move a lot more quickly in recent years because we can work in the physical and the digital worlds simultaneously.

Today, we can create data models out of simple sketches and transfer them into 3-D graphics immediately thanks to special computers with enormous processing power. We factor the final digital data set into a VR model that comes amazingly close to our perception of actually seeing it. In the virtual meeting with VR glasses, we then work on it in real time – regardless of whether the person involved is in the Design Center in Ingolstadt or our studios in Malibu or Beijing. If, for instance, new designs arise then, we can mill them overnight in Ingolstadt. Because one thing is important: digital tools make use significantly faster and better, but they can’t completely replace the physical model. There are things that you just can’t see on a computer, only in reality.

Born in 1979, Philipp Römers got his first taste of auto design as a schoolboy – during a work experience program in the Ford design studio. He studied transportation design at Pforzheim University and received a scholarship from Volkswagen AG. In 2005, he started his career in Wolfsburg as an exterior designer and worked on various show cars as well as series models like the Golf 7 and the Passat B8. In 2014, the Cologne native switched to Audi AG, together with current Audi Design chief Marc Lichte, and initially led a team of exterior experts. Series models like the Audi A3, A6, and Q8 were produced under his leadership as well as concept vehicles like the Prologue and the AI:CON. Finally, Römers is helping to define the future of electrification with the Audi e-tron and the e-tron GT. Since the start of the year, he has led the company’s worldwide Exterior Design department with 170 employees.

Norbert Weber was born in 1961, studied Design in Kiel, Germany and the ArtCenter College of Design in Vevey, Switzerland in the 1980s, and now works at his dream job as a car designer. In 1991, he started leading various projects as an exterior and interior designer at Mercedes-Benz. Starting in 2007, Weber led the Design Center for Interiors and Color & Trim for Audi AG in Ingolstadt before taking over project management and the Design Studio in Beijing in 2012. After five years with Skoda, Weber returned to his old domain. In his position as head of Interior Design at Audi, he currently leads a team of 160 designers and engineers. Weber’s personal milestone is the interior of the Audi TT in 2014.