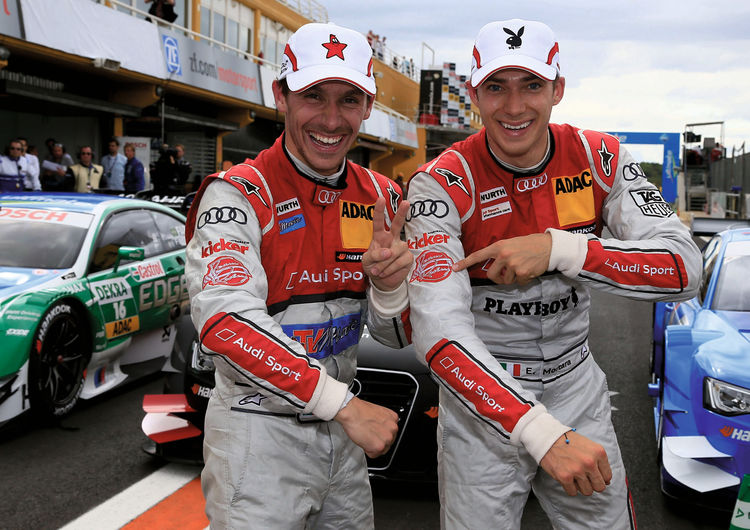 In qualifying for the penultimate DTM race of the season, Audi showed a strong team performance at Valencia, Spain. Four Audi drivers managed the leap into the top five, seven into the top ten. And Rahel Frey caused a sensation as well.

Last year, Audi managed to score a six-fold success at Valencia. And this year, the brand with the four rings is presenting itself well-prepared on the Spanish race track. With grid positions two, three, four and five plus a total of seven vehicles on the five front rows of the grid, Audi has an outstanding starting base for the race on Sunday (starting at 13:45 – local time — live on “Das Erste”).

The quickest Audi driver in qualifying was Edoardo Mortara, who set the second-fastest time in the Playboy Audi A5 DTM. His team-mate Filipe Albuquerque in the TV Movie Audi A5 DTM completed the strong showing by Audi Sport Team Rosberg. Only BMW driver Augusto Farfus was quicker than the Rosberg duo.

“Grid positions two and three are a good result for Filipe (Albuquerque) and me,” said Edoardo Mortara. “Augusto (Farfus) was a bit quicker today. But I’m very optimistic for tomorrow. I believe that in our A5 DTM we’ve got a superb car for the race.”

Adrien Tambay, the Frenchman who is only 21 years old, achieved his best qualifying result in the DTM so far. For the first time, the youngster from Audi Sport Team Abt Sportsline in the Audi ultra A5 DTM qualified for the shoot-out for the top four grid positions and will be starting into the race from position four on Sunday.

Rahel Frey caused a sensation as well. The Swiss in the E-POSTBRIEF Audi A5 DTM managed the leap into Q2 for the first time and will start into the penultimate race of the season from position 15, which even puts her in front of Gary Paffett on the grid.

“We’ve got four cars on the five front grid positions and seven in the top ten – that’s a great team performance, particularly with a view toward the battle in the manufacturers’ championship,” said Head of Audi Motorsport Dr. Wolfgang Ullrich after the qualifying session in Valencia. “Especially in the DTM, this is something very special and not the kind of thing you expect. It shows that on the whole we’re in a strong position. Of course we want to advance by another position tomorrow.”