Audi with good performance but lack of fortune 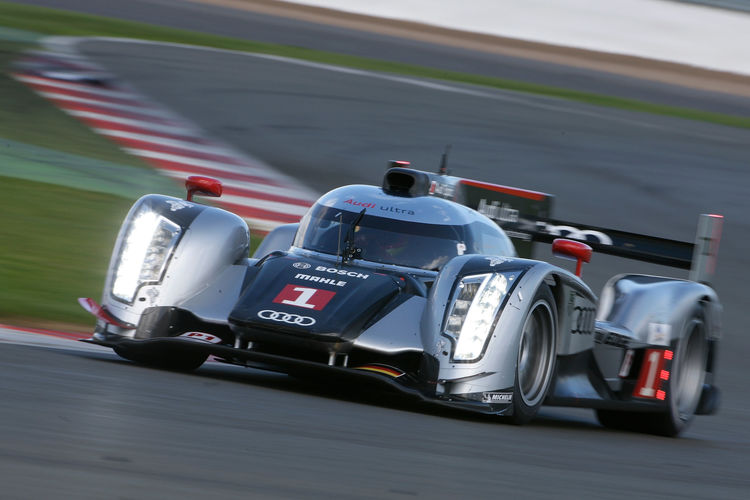 The 6-hour race at Silverstone (Great Britain) in which the two Audi R18 TDI cars of Audi Sport Team Joest on positions two and seven were beaten below their performance potential was perfect advertising for the new FIA World Endurance Championship to be launched in 2012.

From the first lap on the spectators at the fifth round of the Intercontinental Le Mans Cup (ILMC) witnessed fascinating duels between the diesel sports cars from Audi and Peugeot. It took Allan McNish in the Audi R18 TDI designated as car number “2” only eight laps to grab the lead from the Peugeot driven by Frenchman Sébastien Bourdais who had started from the pole position. In the “sister car” Timo Bernhard was putting pressure on Franck Montagny in the second Peugeot before the Frenchman touched another vehicle and spun off the track.

Afterwards Allan McNish and Sébastien Bourdais at the front of the field overtook each other several times. Shortly before the end of the first hour the number “2” car lost any chance for victory when the Audi driver was hit by a GT vehicle. Replacing the front left suspension cost six laps and caused the R18 TDI #2 to drop to the rear of the field. Although the steering wheel was no longer perfectly straight after the repair Allan McNish and Tom Kristensen in the end managed to recover to position seven. That the opponent in the accident had to sit a longer stop-and-go penalty was only little consolation to the two.

All the hopes of Audi Sport Team Joest then rested on Timo Bernhard and Marcel Fässler in the #1 Audi R18 TDI that was fighting a thrilling duel for the lead with the second Peugeot.

A particularly impressive performance was delivered by Marcel Fässler, who in the third hour made up a gap of over 30 seconds to Simon Pagenaud in the Peugeot, overtook the Frenchman and moved to the front of the field.

After the driver change Timo Bernhard defended the lead despite the fact that the rear of the Audi R18 TDI had previously been damaged during slight body contact between Fässler and a slower prototype resulting in a loss of downforce on the rear axle.

More serious though was the fact that in the incident the right taillight of the R18 TDI had come off. The regulations required Audi Sport Team Joest to change the rear bodywork of the car at the next pit stop. Although this was done in record time the time loss of more than a minute was crucial for the outcome of the race. At the finish Timo Bernhard and Marcel Fässler were 89 seconds short of clinching victory.

Fans will not have to wait long for the next race of the fascinating sports prototypes: The penultimate round of the Intercontinental Le Mans Cup that will become the FIA World Endurance Championship in 2012 will be held at Road Atlanta (U.S. state of Georgia) on October 1.

Dr. Wolfgang Ullrich (Head of Audi Motorsport): “I’m pretty disappointed. We had the performance today to win the race. The cars were quick and the team did a perfect job. We didn’t do anything wrong but were simply unfortunate – and not just once but twice. We lost so much time in the process that it was no longer possible to win the race.”

Marcel Fässler (Audi R18 TDI #1): “It was a great race. We pushed. Based on our pace we could have really been in contention for victory. The car was really good today. So it’s a real shame that I had two collisions in which the car was damaged. We simply lost too much time due to the repair.”

Timo Bernhard (Audi R18 TDI #1): “I think we showed a nice race. Second place is good – but we had the potential for more. The performance was good enough for victory because we were battling for the lead across long stretches of the race. It wasn’t meant to be. We lost time in traffic as a result of me going into a spin once, Marcel (Fässer) had a collision that required a repair due to the regulations. Too bad, but I think we can still be satisfied. We delivered a good show today. And, most importantly, the team did a tremendous job of pulling together.”

Tom Kristensen (Audi R18 TDI #2): “A really great race with four cars battling for every centimeter. Especially the early phase was tricky and when the #8 Peugeot got entangled in a collision things were looking very good for us. But then Allan (McNish) unfortunately had the issue and had to pit to have the front left suspension changed. The mechanics did a fantastic job in the pits repairing the damage. From then on we were six laps down trying to get home and helping our ‘sister’ car in any way we could. I feel very sorry that we weren’t all the way in front particularly for our crew. But you can be sure that next time, at Road Atlanta, we will battle for the big cigar again.”

Allan McNish (Audi R18 TDI #2): “It’s a frustrating result considering our performance over the weekend. We had a good car in qualifying and a very good car at the beginning of the race. I had a fantastic battle with Sébastien Bourdais. Once I came a bit too close to the pit wall when I overtook him into turn 1. But I have to say it was a clean and fair fight. Unfortunately it ended too early when a Ferrari had taken a rather strange ‘line,’ damaging my left front suspension. That basically ended our race and also his as he was given a one-minute stop-and-go penalty. That put us down six laps and it was a recovery drive from then on. We learned a lot more here about the R18 TDI for Petit Le Mans and China but were taken out of the battle to win.”

Ralf Jüttner (Technical Director Audi Sport Team Joest): “That was a real shame! We had the pace today. It would have been a nice battle through to the end. In the final analysis, we were lacking exactly the time we lost due to the repair. Collisions are simply inevitable in dense traffic in such a large field. The rules now require this kind of damage to be repaired. We tried to minimize the time loss. That also worked out because we did the driver and tire changes at the same time. But it still took more than a minute and that could simply not be made up. The other car showed a great recovery to position seven. Allan (McNish) and Tom (Kristensen) were very quick too but once you’ve lost six laps you’re no longer in contention. If you want to win against such strong competition you simply can’t afford anything. Nevertheless: I really want to thank the team. They did a superb job. The pit stops were a bit faster than those of Peugeot. Now we’re going to strike at Atlanta!”