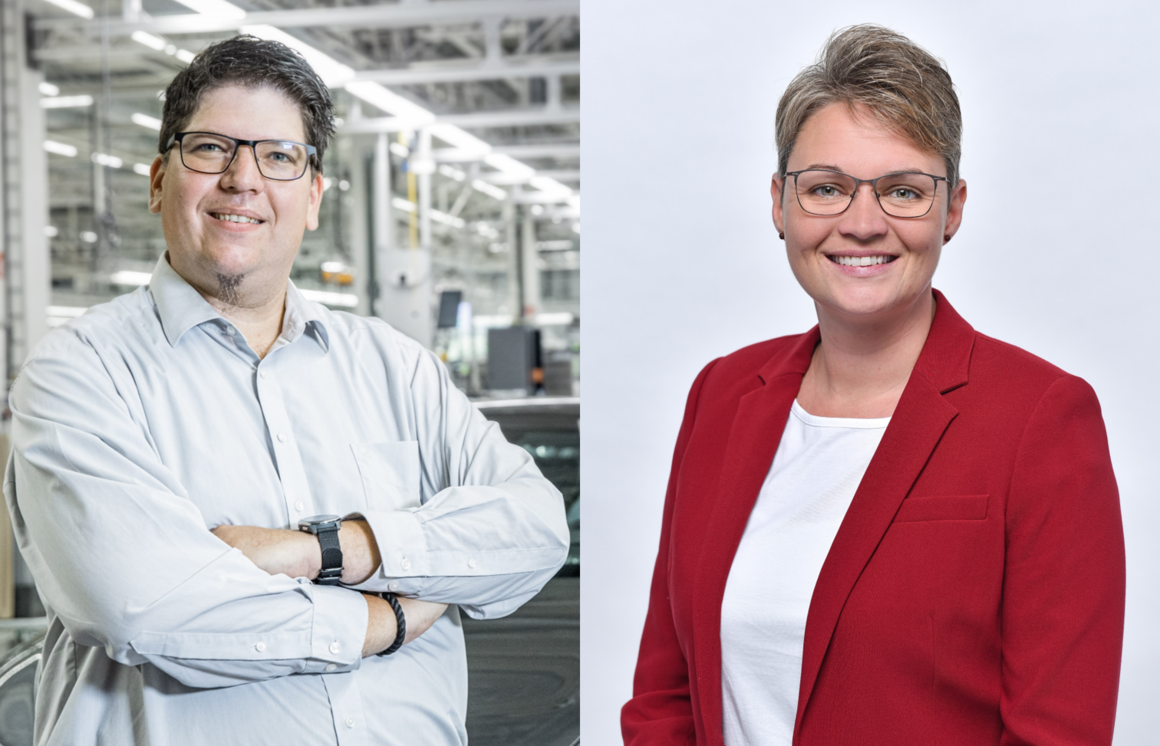 Alexander Reinhart (left) and Karola Frank (right) have been sitting on the Supervisory Board of AUDI AG for the employee side since January 2022.
Download PDF (136 KB)
Facebook
Twitter
LinkedIn
WhatsApp

Two longtime employee representatives, Rolf Klotz and Helmut Späth, officially retired on December 31, 2021, and therefore also resigned from their positions on Audi’s Supervisory Board. Their successors have already joined the board and taken up their new duties.

Alexander Reinhart has been a member of the Supervisory Board of AUDI AG representing the Neckarsulm-based Audi employees since January 1, 2022. The 36-year-old succeeds Rolf Klotz, who retired after 46 years at Audi in Neckarsulm.

Reinhart began his vocational training as a mechatronics technician at AUDI AG in Neckarsulm in 2004 and became a member of Germany’s Industrial Union of Metalworkers (abbreviated IGM in German) in the same year. Reinhart was also elected union representative and youth and trainee representative in 2004. From 2008 to 2010, he served as the chair of the youth council in Neckarsulm. Following his vocational training, Alexander Reinhart worked as a production specialist, welding line operator, co-trainer for electrical engineering and, after completing his advanced training as a REFA technician, in industrial engineering at the plants. Reinhart has been a member of the board of union representatives since 2008 and served as the board’s chair from 2020 to 2021. In 2014, Alexander Reinhart was elected to the Works Council in Neckarsulm. He has also been a member of Audi’s General Works Council since 2018. In 2021, he became vice chair of the Works Council in Neckarsulm and a member of the Group Works Council of Volkswagen AG. Reinhart has also been active on the Neckarsulm IG Metall local executive board since 2016.

Alexander Reinhart succeeding Rolf Klotz marks a transition to the next generation taking place on the Supervisory Board after it took place on the Works Council in Neckarsulm. Reinhart is excited about and looking forward to his new role: “My heart beats for the employees and the plant. I am delighted to now also represent the interests of Audi employees on the Audi Supervisory Board and therefore to be able to follow in the – admittedly hard-to-fill – footsteps of Rolf Klotz.”

In addition to her longstanding involvement as a member of the Works Council at Audi in Ingolstadt, the 39-year-old has also represented the interests of employees on the Audi Supervisory Board since January 1, 2022. Karola Frank joined IG Metall in 1997 and was already active for the union as a young Audi employee. During her training as a vehicle painter, she was an active member of the youth and trainee representative committee, including serving as the chair. After completing her vocational training, she became a member of IG Metall's board of union representatives, and in 2015 she took over as vice chair. She was elected to the Works Council in the 2009 elections and has since been looking after the concerns of Audi employees in office departments such as Auditing, Legal Services, Marketing, and Sales. The Audi employee's commitment to the union extends far beyond the factory gates – Karola Frank has been a member of the IG Metall local executive committee in Ingolstadt since 2003 and an honorary member of the executive committee of IG Metall Germany since 2018.

Her career – from vehicle painter to master craftswoman for warehousing and transport as well as business mediator – has developed just as systematically over the years as has her commitment to the employees, from chair of the youth and trainee representative committee (2003-2008) to member of the Audi General Works Council (2021). Being appointed to the Audi Supervisory Board was now the next logical step: “Thanks to years of experience and knowledge acquired as a Works Council member in a wide variety of areas, I am looking forward to my new duties and, of course, even more so to being able to represent the interests of Audi employees on the Audi Supervisory Board,” said Frank.

Background: Audi Supervisory Board
In accordance with applicable legal requirements, the Supervisory Board of AUDI AG is composed of ten shareholder representatives and ten employee representatives, each of whom is generally elected for a term of five years. The Supervisory Board monitors, oversees, and advises the Executive Board in its management activities. It is responsible for appointing and dismissing members of the Executive Board. It also audits the annual and consolidated financial statements and the combined management report of the Audi Group and AUDI AG.

Alexander Reinhart and Karola Frank have now complemented the employee representatives since January 1, 2022. Together with Peter Mosch, Jörg Schlagbauer, and Rita Beck for Ingolstadt and Rainer Schirmer for Neckarsulm, they represent the interests of all Audi employees on the board. Representing the union on the employee side are: Petra Otte (IG Metall Baden-Württemberg trade union secretary), Irene Schulz (IG Metall Germany executive board member) and Bernhard Stiedl (IG Metall Ingolstadt first authorized representative). Stefanie Ulrich (Human Resources Management Audi Neckarsulm) will represent the executive employees on the employee side.