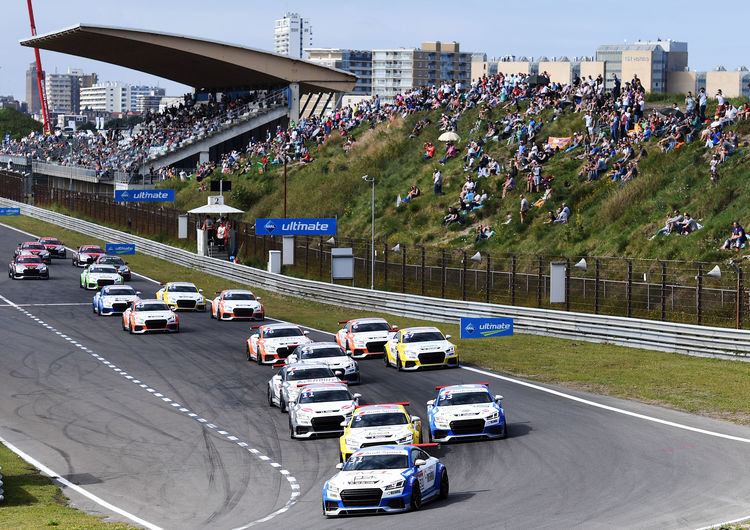 In the dunes of Zandvoort, the young drivers delivered two thrilling races with many door-to-door duels to the large number of fans. In round two on Sunday, Sheldon van der Linde proved his talent once more. From pole position, the 17-year-old clinched an uncontested lights-to-flag victory – his fourth success this season. Nicklas Nielsen and Max Hofer (A) perfected an all-rookie podium. “Three newcomers on podium is something we haven’t seen yet this year,” said Project Leader Philipp Mondelaers. “The results underscore the solid pre-season evaluation work and tremendous development of our young talents.”

The first race on Saturday had been won by a rookie – Nicklas Nielsen – as well. Like van der Linde on Sunday the 19-year-old drove to victory from pole position – scoring his first ever win in the Audi one-make cup. Following his triumph, Nielsen’s compatriot Tom Kristensen was among those extending their congratulations. Kristensen had kept his fingers crossed for Nielsen alongside the track and expressed great praise for all the young talents in the Audi one-make cup as well. Chris Reinke, Head of Audi Sport customer racing, confirmed these sentiments: “Zandvoort was another highlight for the Audi Sport TT Cup, not only due to the fantastic quality of racing delivered there but also thanks to the high-caliber guest entrants who inspired a lot of interest among the fans and media.”

In the guest entrants’ classification, the battle was billed as “nobility versus winter sports.” The Dutch Prince Bernhard van Oranje kept the upper hand against the stars from the Audi FIS Ski World Cup, Adrien Théaux and Peter Fill, in both races. The aristocrat and co-owner of Circuit Park Zandvoort took second place in both rounds, trailing Formula One commentator Allard Kalff (NL). The duel between the ski aces ended in a tie. In race one, Théaux kept the upper hand against his skiing rival Fill. On Sunday, the South Tyrolean struck back.

In the overall classification of the Audi Sport TT Cup, Dennis Marschall continues to rank in the top spot. The driver who finished last year in third place has a tally of 158 points – seven more than van der Linde. Joonas Lappalainen (FIN), with 147 points, completes the top three. Following a brief summer break, the Audi Sport TT Cup will be visiting the Nürburgring. As part of the DTM’s supporting program, the fifth in a total of seven race weekends is scheduled from September 9 to 11.