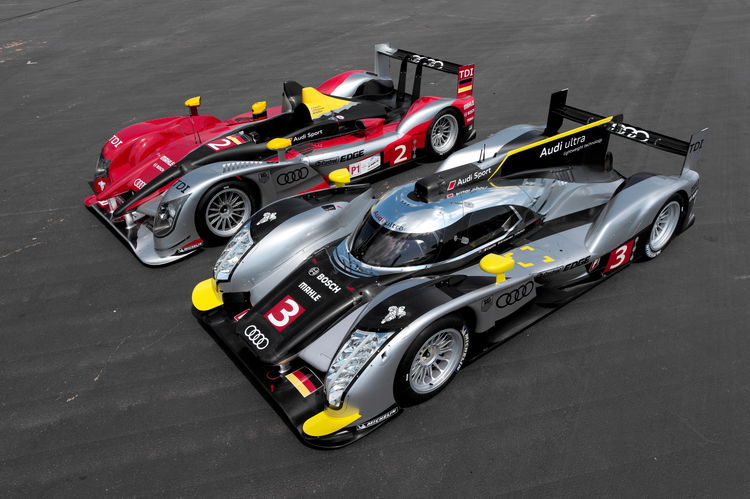 Audi contests the famous 24 Hours of Le Mans with a closed car for the first time since 1999. Aerodynamic efficiency was the focus of attentions during development of the new Audi R18 TDI because it plays an even larger role at Le Mans than in the past.

“A closed car is not necessarily more efficient,” stresses Dr. Martin Mühlmeier, Head of Technology at Audi Sport. “Race cars designed to generate very high downforce levels, in Formula 1 for example, are also very efficient ‘open’ designs. If you want to go in the direction of low drag or must, like now at Le Mans with the engine power being reduced and the circuit characteristics still dominated by long straights and high speed, then a ‘closed’ car is more efficient than an ‘open’ one.”

For this reason, Audi Sport has dropped the ‘roadster’ concept with which the four Rings brand recorded nine Le Mans victories between 2000 and 2010. Head of Audi Motorsport Dr. Wolfgang Ullrich has mixed feelings: “I really liked the ‘open’ cars but there are beautiful ‘closed’ sports prototypes as well – and I think that the R18 TDI is a typical Audi making a very good visual impression.”

It is, however, not only aerodynamic efficiency that plays a role in the decision for or against a ‘closed’ car. The sporting regulations developed in such a way over the years that one of the roadster’s decisive advantages – namely fast driver changes – was eradicated: changing tires at Le Mans now takes considerably longer due to the fewer number of mechanics allowed to work simultaneously on the car. Therefore a fast driver change is no longer a decisive factor.

Turbulence in the cockpit area is the greatest disadvantage ‘open’ race cars have with regard to a good cd value. Airflow around a closed car like the R18 TDI is significantly more uniform. The resulting increase in aerodynamic efficiency can be transformed into either more downforce or greater top speed.

The wind tunnel continues to play a major role during the development of a Le Mans sports car. The relevance of so-called CFD (Computational Fluid Dynamics) simulations on high-performance computers was increased significantly. CFD  allows engineers to simulate the air flow around and through the car. “While basic concepts and also complex detail tests are calculated, performance relevant dynamic running conditions can be evaluated in the model wind tunnel,” explains Axel Löffler, Head of Chassis Development and Aerodynamics at Audi Sport.

Optimization of the aerodynamic efficiencies in different dynamic attitudes was one of the most important points in the R18 TDI performance specification. “The ground clearance changes, at high speeds the car is closer to the track due to the downforce,” says Mühlmeier. “Once again our target was to achieve well-balanced handling that is not too acute. To a certain extent you must forego absolute peak values to realize this.”

In contrast to the preceding R15 TDI model, the internal airflow of the car could be significantly improved. The innovative engine concept is, among other factors, also responsible for this. The extremely compact V6 TDI engine and the relocation of the exhaust system and turbocharger to the top of the power unit allows hot air exiting from the coolers to flow unobstructed out of the rear bodywork.

The fin, stipulated by the regulations, which extends between the cockpit and rear wing and which should help to reduce speed in the event of a spin, had considerable influence on the design of the R18 TDI. “Integration of the new fin in the overall vehicle aerodynamics was the result of extensive analysis,” says Axel Löffler. “To respect the safety aspects without creating losses in the overall efficiency required completely new approaches during development.”

As a consequence Audi Sport tried to integrate the fin into the vehicle’s structural and overall aerodynamic concept. To this end, the rear wing mountings merge almost seamlessly with the fin. The single piece exhaust was also integrated innovatively in the overall packaging at the rear.

Audi also uses the fin as a design element. “I think that we found a good compromise by attempting to view the fin as an active element,” says Dr. Wolfgang Ullrich who is proud of the new Audi R18 TDI prototype’s aerodynamic efficiency. “Aerodynamics has always been one of Audi’s core skills. It speaks for itself that in spite of significantly reduced engine power we reach almost the same top speed and levels of downforce like last year with the R15 TDI.”