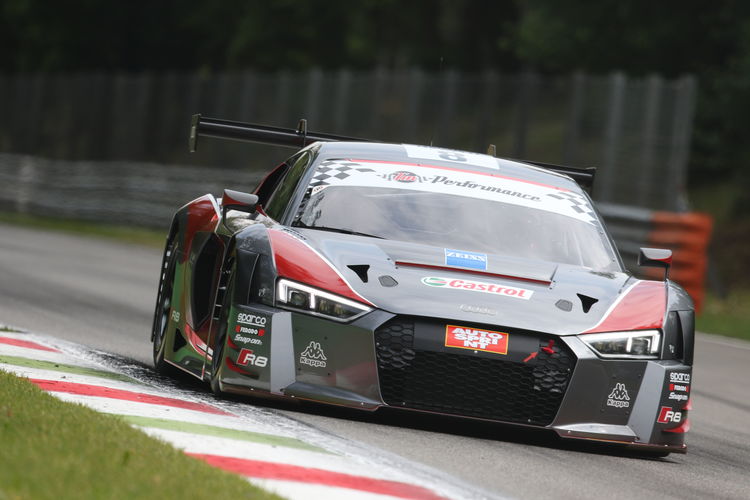 Successful season opener for Audi Sport Italia in the Italian GT Championship. Marco Mapelli and Filipe Albuquerque achieved victory in race one on Saturday. After starting from position three, Mapelli, who drove the final stint, following a strong performance by Albuquerque in the Audi R8 LMS, took the lead of the race in the second half. A riveting battle in the final stage saw Mapelli finish in position one by a narrow margin. For Albuquerque it was a special race: The Portuguese driver first raced with Audi Sport Italia in 2009 and after about five years he celebrated his comeback with the team at the Monza season opener.

Audi wins again in round two of the VLN

With a strong performance, Audi drivers Frank Stippler and Anders Fjordbach clinched victory in round two of the VLN Endurance Championship at the Nürburgring. In the Audi R8 LMS of Phoenix Racing, the duo confirmed its dominance from the opening race and celebrated its second victory in succession. With a remarkable advantage of 57.8 seconds, Stippler/Fjordbach crossed the finish line in first place. In the overall standings, the two Phoenix drivers now have a confident lead in the top spot.

In round two of the ADAC GT Masters season held at the Sachsenring, Audi customer teams impressed in both races. In the first race on Saturday afternoon, Christopher Mies and Connor De Phillippi took second place. Daniel Dobitsch and Edward Sandström completed the podium.
In race two on Sunday, the Mies/Phillippi driver duo, following an overtaking maneuver on the race’s final lap, achieved a seventh place that was important for defending the lead of the standings. Rahel Frey and Philip Geipel were other drivers who had reason to celebrate. In the home round of their team, Yaco Racing, the two drivers took second place in the Audi R8 LMS. Laurens Vanthoor and Florian Stoll in third place perfected the podium success for Audi.

An Audi R8 LMS sporting an unusual livery is on the grid in the DMV GTC racing series this year. Rutronik commissioned artist Rudi Fielitz to design an Art Car. As a distributor, Rutronik is the connecting link between customers and manufacturers. The Distribution Art Car was created as a joint project involving 46 manufacturers from the electronics industry. The conspicuous GT3 race car attracts attention to the cause supported by Bundesverband Herzkranke Kinder e.V. (Federal Association of Children Suffering from a Heart Condition). A total amount of 9,000 euros was donated to this non-profit organization while 25 children suffering from a heart condition witnessed the first race of the Distribution Art Car at the Hockenheimring. Tommy Tulpe and Fabian Plentz won the Dunlop 60 race in the DMV GTC in the car.

Team B-Quik Racing is doubling its line-up with Audi. The squad with team boss and race driver Henk J. Kiks has previously been involved in the Thailand Super Series (TSS) with one Audi R8 LMS. This year, the team is returning to the series with two of the German GT3 race cars and has signed Daniel Bilski as a second driver. The Australian won the amateur driver classification in the Audi R8 LMS Cup last year. The TSS will kick off this year at Chang International Circuit in Buriram, Thailand, from May 19 to 22.

André Lotterer promotes round two of the season in Brussels

Members of the media in Belgium spent an evening together with race drivers from the FIA World Endurance Championship (WEC) on Monday. André Lotterer represented Audi at a dinner in Belgium’s capital Brussels to get the journalists in the mood for the next world championship round. Lotterer, together with his teammates, Marcel Fässler and Benoît Tréluyer, is returning as last year’s winner to Spa where round two of the season will be held on May 7.

Molina in motorsport spectacle at Budapest

In the NAGY FUTAM 2016 (Great Race) at Budapest, Audi driver Miguel Molina presented himself to the Hungarian motorsport fans at close range. During some demo laps, the Spaniard gave an idea of the performance he is capable of delivering in his RS 5 DTM. Molina repeatedly gunned the 460-hp engine of his race car in the streets of the Hungarian capital and with lots of smoke and spinning tires tremendously thrilled the crowd. The large-scale event organized by the Hungaroring attracted hundreds of thousands of spectators to the Danube riverwalk. In September, the Audi factory driver will be returning to Budapest – in competitive conditions for the season’s penultimate DTM race.

A day full of variety at Schaeffler: Mike Rockenfeller visited the Schaeffler Motorsport Academy in Herzogenaurach yesterday. The Audi factory driver engaged in an exchange with fans and Formula Student alumni and avidly signed autographs. “Rocky,” who has been sporting Schaeffler’s colors ever since the 2012 DTM season and became DTM Champion the following year, answered the questions of the engineers of tomorrow during a panel discussion.

Bidding for a good cause: Audi Sport’s partner Hoffman Group will be auctioning a signed racing suit of Jamie Green’s from May 2 to 12 on “eBay for Charity” for the benefit of the company’s own foundation. The Hoffmann Group Foundation supports institutions that further the development of deprived and traumatized children and teenagers. Jamie Green has been causing a stir in the DTM sporting the orange livery of the tool specialist for three years. In 2015, he finished the season as the best Audi driver.

The 2016 Audi Sport TT Cup is opening up for further markets. This year, not only 16 permanent entrants from eleven countries are competing in the races of the one-make cup, but guest entrants from other nations will be on the grid as well. Four Cup cars will be available for them on each race weekend. Their cockpits can be filled by Audi Sport dealerships around the globe with drivers that have racing experience. In addition, each of the rounds will include four changing celebrities and journalists. The objective is to position the Audi Sport TT Cup on an even more international scale.

Audi driver Jamie Green in an interview about his expectations for the 2016 DTM season, his goals for the season opener at Hockenheim next week and the upcoming birth of his third child.

The new DTM season will start next weekend. Are you excited or is it just “business as usual?”

A little bit of both. I’ve been racing in the DTM for many years, so the situation isn’t new for me. But the season opener is always exciting because after the long winter break you don’t know yet where you stand in terms of performance.

The DTM rule makers have done a lot to create balance in the field. What can the fans expect?

I think there’ll be more intermixing of the brands. Last year, some of the races were dominated by a single manufacturer due to the allocation of the additional weights. In other races, another one would benefit from the weight distribution. I believe this year the relative strengths are no longer going to shift as much from race to race.

There have been other rule changes made for this season. What effects, for example, will the limitation of DRS use have?

The problem last season was that the chasers were able to use DRS throughout the race in order to stay on the heels of the driver in front. That made it difficult to pull clear of the car chasing you. The limitation now makes the race fairer.

Let’s change the subject. You’re expecting the arrival of your third child. Any news you’d like to share about this?

I’m intensively preparing for the season opener, but the upcoming birth of our baby is constantly in the back of my mind. I was present during the birth of my first children, but this time the due date falls on the Hockenheim weekend. We’re hoping for it to perhaps happen a little earlier. If not, the plan is for me to stay at Hockenheim.

What’s your goal for the season opener?

Last year, I won the first and the last race at Hockenheim. It would be great if I could repeat that.


Coming up next week