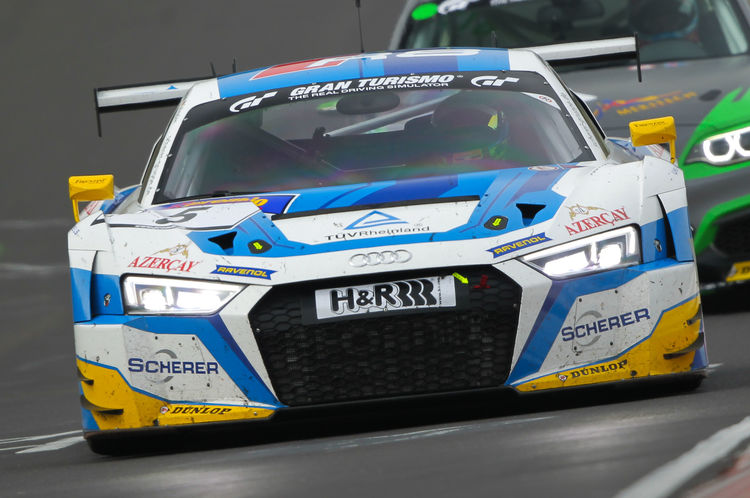 An Audi Sport customer racing team won the opening round of the VLN endurance championship season at the Nürburgring with the Audi R8 LMS.

At the opening round of the VLN endurance championship Nürburgring, Frank Stippler and Anders Fjordbach in a Phoenix Racing Audi R8 LMS took first place ahead of their team mates Christopher Haase and Laurens Vanthoor.

Mattias Ekström treated Kevin Volland to a highlight at the Hockenheimring. Immediately following the German national footballer’s sixth appearance in an international fixture, the friendly against Italy, the striker from TSG Hoffenheim climbed into the passenger’s seat of Ekström’s Audi S1 EKS RX quattro. In the race car of his privateer rallycross team EKS, the Swede did a few laps with Volland and his Hoffenheim teammate Mark Uth during tests. Both soccer players were visibly thrilled with the 560-hp four-wheel drive vehicle.

Audi is represented in the Japanese Super GT Championship with two new R8 LMS cars in the 2016 season. Audi Team Hitotsuyama relies on continuity with its drivers. The squad is now in its six consecutive year of running with the German automobile manufacturer and entrusts the Briton Richard Lyons and the Japanese Tomonobu Fujii with driving duties of its new race car. At the same time, in Audi Team Braille, Audi Sport customer racing is welcoming a new customer in the Super GT. One of the two race drivers is the Japanese Masanobu Kato. He is supported by the German Pierre Kaffer, who has been contesting GT3 races in the Audi R8 LMS for several years.

Potential guest entrants for the Audi Sport TT Cup proved their prowess on this year’s track day of the Audi one-make cup. At the Audi driving experience center in Neuburg an der Donau, the participants from 16 nations spent a day with theoretical and practical contents. In addition to presentations held by Project Leader Philipp Mondelaers and Technical Project Leader Detlef Schmidt, the applicants hit the track in the 540-hp Audi R8 V10 and the Audi TT cup with 310 hp. The search is on for guest entrants on the seven race weekends in the Audi Sport TT Cup.

Adrien Tambay visited Audi Sport partner Akrapovič in Slovenia. The DTM driver attended a seminar in Ljubljana as a guest. At the event, the Frenchman provided 80 dealers from Germany, Austria, Switzerland, Sweden and Italy with insight into Audi’s DTM program. Tambay subsequently used the opportunity to visit Akrapovič’s plant in Ivančna Gorica, Slovenia, where 800 employees produce high-end exhaust systems for the road and racing.

Lucas di Grassi reclaimed the Formula E championship lead after taking his second victory and fifth podium visit this season. The Audi factory driver, who competes in the electric racing series for the ABT Schaeffler Audi Sport team, won a thrilling race staged on the doorstep of Hollywood. Team mate Daniel Abt’s third place completed the German team’s excellent result. Following oversea races in Asia as well as South and North America, Formula E now comes to Europe: the next race is held in the heart of Paris on April 23.

The GT3 driver is facing an intensive season with Audi.

Audi Sport customer racing has built and delivered an amazing number of 50 new R8 LMS cars to date. Competing in car number 50 is a way of paying homage to this round lot. Our team boss, Uwe Geipel, took over the car on Thursday. My teammate, Philip Geipel, and I are excited about the new ADAC GT Masters season coming up and are looking forward to the Audi R8 LMS. Our season starts at Oschersleben on April 16.

What are the capabilities of the new Audi R8 LMS and what strengths characterize the team?

Our season in the ADAC GT Masters concluded with a race victory at the Hockenheimring and now we want to build on this success with the new generation Audi R8 LMS. The car has been rigorously developed and it has been victorious at three 24-hour races so far. It has very sophisticated aerodynamics and more set-up options than its predecessor. The car can be set up to suit any customer wish. As a team we’re challenged to put this on track through good communication between the drivers and the engineers. Our big advantage is being a well-gelled team. In 2016, we’re in our third year of running as a driver pairing. This year, the ADAC GT Masters will be particularly competitive because many first-class teams with good drivers have submitted entries for the series.

Will the program in Germany completely fill your schedule?

No, I have the opportunity to handle many other commitments for Audi. This year, I’m contesting races with the Audi R8 LMS in Asia again. For the Audi driving experience, I took part in the FIS Ski World Cup Finale in St. Moritz and for the Swiss importer AMAG I conducted driver training sessions in Samedan.