"A win-win for both sides. And for humanity." 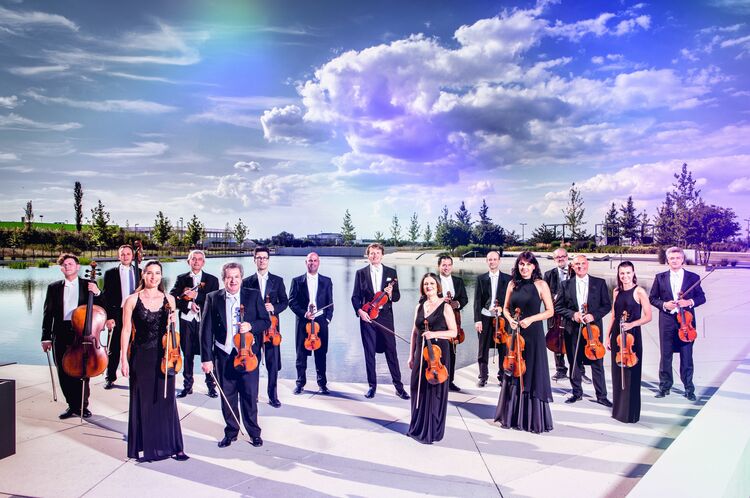 32 years ago, the Georgian Chamber Orchestra found its exile in Ingolstadt. Since then, it has been anchored firmly in the city's cultural life. It is impossible to imagine the Audi Summer Concerts without it. This year, it will again perform at the Audi Klassik Open, bringing memories of the orchestra's eventful history back to life. Two of the orchestra's musicians share a story of hope.

In 1990, the world was optimistic after the fall of the Berlin Wall and the end of the Cold War. The Georgian State Chamber Orchestra, founded in 1964 in the capital of Georgia, Tbilisi, is enjoying the freedom to travel - and making a guest appearance at the renowned Schleswig-Holstein Music Festival in northern Germany. The accomplished string ensemble makes music with classical music greats like Justus Frantz, the festival's artistic director, and conductors George Solti and Kurt Masur.

But the festival, sponsored by Audi ArtExperience since 1988, is overshadowed. Political tensions are growing in the Georgian homeland against the backdrop of the Soviet Union’s disintegration. Audi in Ingolstadt takes the initiative by approaching the then-mayor of Ingolstadt, Peter Schnell, and a decision is quickly made. The city offers the orchestra exile on the Danube and relocation to Bavaria, with Audi’s support.

A safe harbor for the Georgians

"It was a win-win situation for both sides," says flutist Ariel Zuckermann, who is now the orchestra's artistic director and conductor. "Ingolstadt didn't have a classical orchestra at the time - and the Georgians had a new safe home. They were given an initial two year contract, and the first ensemble members brought their families to Bavaria." As well as AUDI AG, the city of Ingolstadt and the local savings bank were partners in the arrangement. And it became a success story: the performances of the "Georgians," especially the subscription concerts held since 2001, recorded consistently high attendance figures, and the city extended its contract with Audi. At the same time, the political turmoil in the lost homeland intensified - Russia's attack on Georgia in 2008, the annexation of Crimea in 2014, and now the terrible invasion of Ukraine - has both shaken and strengthened the musicians' Eastern European confidence.

A unique character – preserved even in exile

But, viewed in the light of day, the new life in Bavaria is nothing other than a continuation of the old under different conditions. Continuity is a principle of the orchestra, which has always preserved its character, even in exile. Many musicians from Georgia and Eastern Europe still play in the ensemble. Just now, with a recording of the "Fire Dance" by the Azerbaijani composer Kara Karajev, conducted by Ariel Zuckermann, they have once again shown where the heart of the "Georgians" beats. You can watch a moving trailer on YouTube.

Artistically, the orchestra was significantly influenced by its long-time leader, violinist Liana Issakadze, as well as personalities like conductors Yehudi Menuhin and Kurt Masur. Markus Poschner led the ensemble from 2000 to 2006. He was followed until 2011 - and again from 2021 - by the Israeli-born Ariel Zuckermann. In the meantime, the Los Angeles-born Benjamin Shwartz and the Armenian Ruben Gazarian took the podium. A phalanx of outstanding international artistic personalities, including David Oistrakh, Barbara Hendricks, Svjatoslav Richter, Daniil Shafran, Heinrich Schiff, Gidon Kremer, Edita Gruberova, Giora Feidman, and Christian Zacharias, have performed with the ensemble.

A cultural ambassador of the city of Ingolstadt

On location in Ingolstadt, the "GKO" feels responsible not only for a broad repertoire, from baroque to modern, but also as the city’s cultural ambassador. Around 90 concerts annually take the orchestra to music festivals, both in Germany and abroad. And at the Audi Summer Concerts, the popular Audi ArtExperience event series, the ensemble has been a fixture for years. In its tremendous versatility, the orchestra constantly retells its story, uniquely enriching Ingolstadt's musical landscape.

Today, the "GKO" has around 20 members - plus guest musicians. And it is multinational, with Germans, Spaniards, French and Asians - but also with a core of Georgian artists. "There is a passion that is still there," says conductor Zuckermann. "Temperament, virtuosity, warmth, energy - these are the qualities that characterize my orchestra. That can play everything from baroque to classical to romantic to modern, even to world music and jazz." Alexander Konjaev, the principal second violinist, has played with the GKO since 2004. He grew up in Georgia with German roots and attests: "It is this special joy of playing that distinguishes us. And the passion for the great Eastern European musical heritage. I experienced one of my very personal highlights at a performance in Hamburg's Elbphilharmonie in March 2018. As part of the 'Caucasus Festival', we were the first chamber orchestra to play in this beautiful hall."

> To the Georgian Chamber Orchestra Ingolstadt

> To the Audi Summer Concerts