Links
{{ activeItem() }}
Twitter
07/09/20
Testing comes to a close at @circuitspa. The next time we’re here with the Audi RS 5 DTM will be to get the 2020… https://t.co/7IlCEZMNaW
07/09/20
RT @FIAFormulaE: “If we perform at our best, we can fight for victories and hopefully the title.” Check out our article to read about how @…
07/09/20
Our @FIAFormulaE driver @LucasdiGrassi will be joining Alejandro Agag for a special edition of @campusparty… https://t.co/SCcolwx7Wg
07/09/20
Preparation continues: @BenoitTreluyer is out on track in the Audi RS 5 DTM test car at @circuitspa today, the @DTM… https://t.co/LgNDhhNBIp
Audi Sport on Twitter
{{ activeItem() }}
Facebook
06/30/20
10 races with thrills, spills, banter and more: Looking back on the first season of the RCCO #RaceHome charity racing series with our DTM factory drivers competing for a good cause. #RaceHome #AudiTogether #etron #StayHome #PerformanceIsAnAttitude #RaceAtHome
06/29/20
From the virtual RCCO #RaceHome season finale, to picking up his new ride and racing at the Green Hell – a fun week for Nico Mueller in his latest #DriversDiary. >> audi.com/DTM >> audi.com/GT3 #RaceHome #AudiTogether #etron #StayHome #PerformanceIsAnAttitude #RaceAtHome -------------------- Audi RS 6 Avant: Combined fuel consumption in l/100 km: 11,7 (20.1) – 11,5 (20.5); combined CO2 emissions in g/km: 268 (431.3) – 263 (423.3); Information on fuel consumption and CO2 emissions as well as efficiency classes in ranges depending on the tires and alloy wheel rims used. // www.audi.com/dat
06/25/20
“That was the car I really loved to drive. I felt really confident in the new A4.” Together with Mattias Ekström, we’re looking back on the era of the Audi A4 DTM – the car that scored 5 DTM drivers’ titles for us. >> audi.com/DTM #PerformanceIsAnAttitude #AudiTogether
06/24/20
The first season of the RCCO #RaceHome charity racing series is in the books. Check out our race highlights and broadcast from WeatherTech Raceway Laguna Seca: >> bit.ly/2Vb03ww #RaceHome #AudiTogether #etron #StayHome #PerformanceIsAnAttitude #RaceAtHome
Audi Sport on Facebook 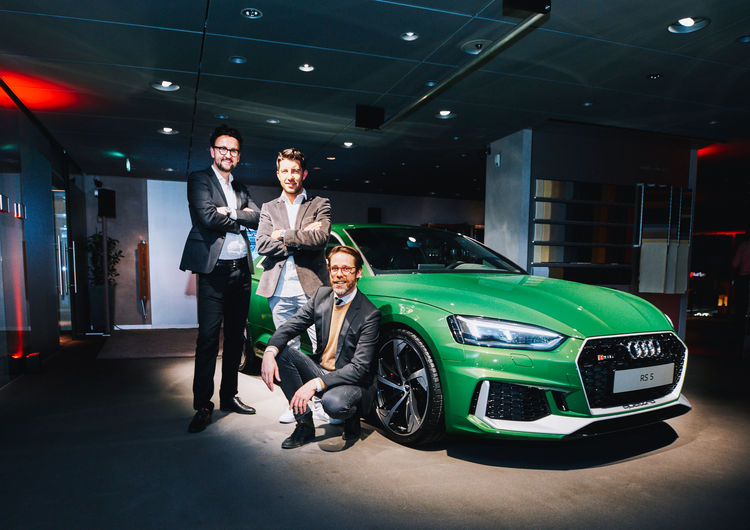 Audi DTM driver Mike Rockenfeller was a guest at the annual “RStaurant” event hosted by Audi City Berlin, where the latest Audi RS models are introduced to their dealers and customers. The 2013 DTM champion was on hand to share his experiences as a race driver, answer questions and to talk about the upcoming motorsport season. The evening’s star was the Audi RS 5 Coupé, which was unveiled in a stunning green, a color that is very familiar to “Rocky”, who has driven with Audi partner Schaeffler in the DTM since 2012, including his DTM title-winning season. Rockenfeller will now prepare for his first taste of the new Audi RS 5 DTM, which he will sample during the final pre-season DTM test days at Hockenheim from April 3 to 6.