Profile of Audi in China 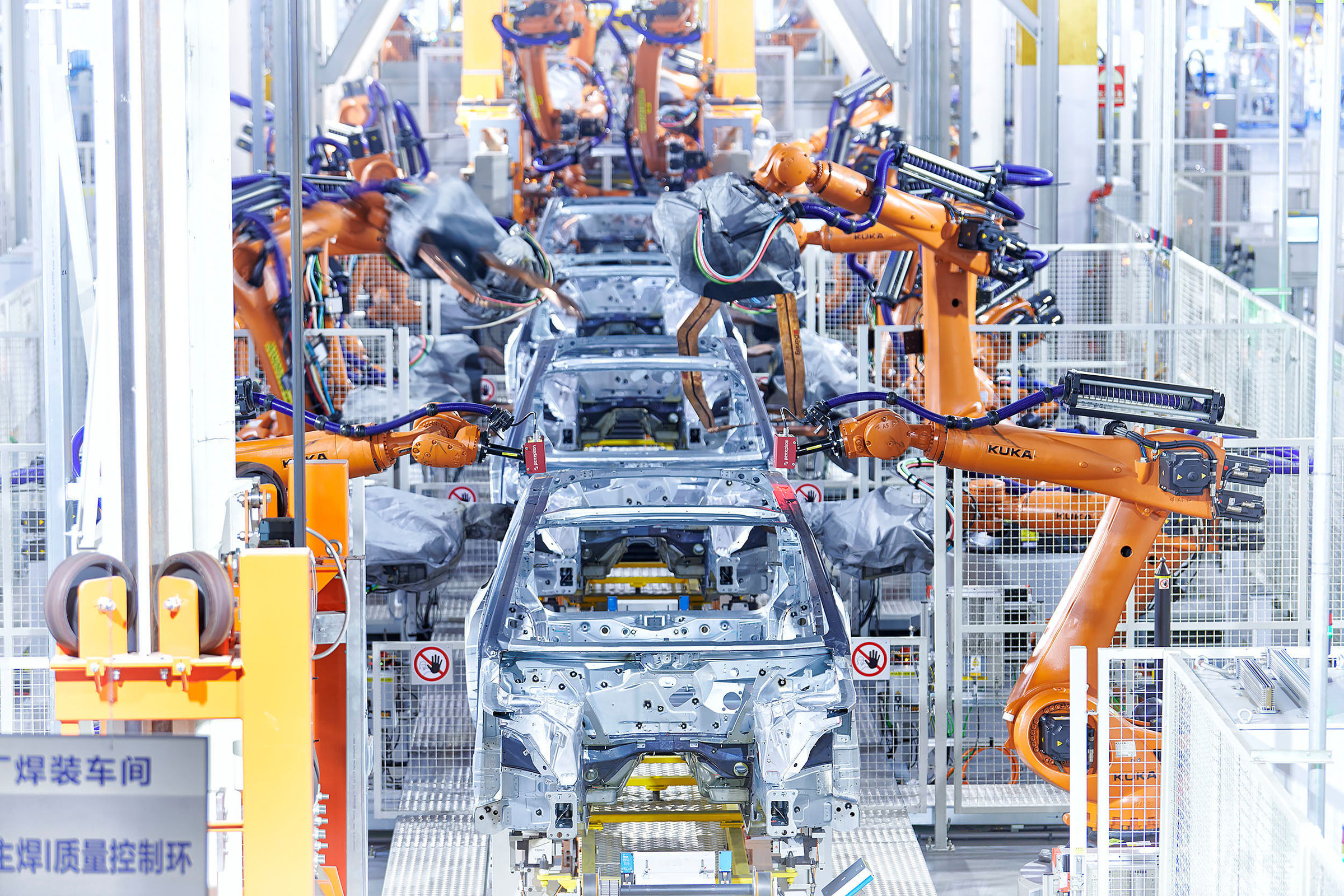 The Chinese market has special strategic importance for Audi. As such, Audi develops market-specific technologies and manages the sales and production of its vehicles with two local partners on site. AUDI AG is represented in the world's largest single market with the subsidiary Audi China in Beijing, with the joint venture FAW-Volkswagen with headquarters in Changchun, and since 2021 with SAIC Volkswagen in Anting/Shanghai. As a result of the two-partner strategy implemented in 2021, Audi possesses its largest model portfolio in China to date with 40 models. With the newly founded Audi FAW NEV Company, Audi is laying important groundwork for expansion of the local e-product portfolio and is building a new production plant for all-electric Audi models based on the PPE platform.

Audi in the Chinese market

The history of Audi in China goes back a long way: the company has had a presence there now for over 30 years. In 1991, it began its partnership with the Chinese automaker First Automotive Works (FAW). As such, Audi was the first foreign premium manufacturer in the market and also the first to adapt its product portfolio to the specific needs of Chinese customers, such as by offering Audi models with extended wheelbases.

AUDI AG is represented in Beijing with its 100%-owned subsidiary, Audi China. The 600 or so employees at Audi China coordinate the cooperation between AUDI AG and its partners, the joint venture FAW-Volkswagen with head office in Changchun and – since 2021 – SAIC Volkswagen in Anting/Shanghai. With its two partners, Audi manufactures vehicles at a total of five locations (Changchun, Foshan, Tianjin, Qingdao, and Anting/Shanghai).

One of the main focuses of the company is on the intensification of local research and development activities in order to offer market-specific technologies and products for the Chinese market. Audi China R&D develops models, products, and technologies that are specifically adapted to local customer requirements. Audi places particular emphasis here on developing electronics, advanced driver assistance systems, market-specific connectivity features, and extended smart cockpit features, i.e. intelligent operating and comfort functionalities. To integrate technologies and services from the digital Chinese ecosystem into its vehicles, Audi also enters joint ventures with Chinese tech corporations.

In 2021, the brand with the four rings once again delivered over 700,000 cars in China (Chinese market including Hong Kong: 701,289). Meanwhile, the company celebrated its seven millionth vehicle delivery in China in July 2021.

As the first premium manufacturer in the market, Audi was quick to embrace local production of market-specific models and brought state-of-the-art automotive and manufacturing technologies to China.

Audi models are currently being manufactured at a total of five locations belonging to the two partners, FAW and SAIC: Changchun, Foshan, Tianjin, Qingdao, and Anting/Shanghai – with a production capacity at present of over 600,000 vehicles. With the construction of a new production site for all-electric models, Audi is expanding its capacities by a further 150,000-plus cars in the lead-up to the planned start of production at the end of 2024.

With the establishment of the Audi FAW NEV Company Ltd., a state-of-the-art manufacturing facility is also being built in Changchun for all-electric Audi models. The plant is being constructed on a site of around 150 hectares and, as the newest production facility, it is setting new standards in terms of digitalization, efficiency, and sustainability. With an annual capacity of more than 150,000 vehicles, the new location will make a key contribution to the further electrification of the Audi product portfolio in China. As of the end of 2024, its production lines will be turning out mid- and top-range electric models based on the PPE (Premium Platform Electric) platform. The Audi FAW NEV Company is the first joint venture with a majority Audi holding in China.

Finished at the end of 2013, the FAW-Volkswagen plant in the southern Chinese city of Foshan manufactures the Audi A3 Sportback, the Audi A3 L Sedan, and the Audi Q2 L based on the MQB platform and the electric Audi Q2 L e-tron.

Meanwhile, the Audi Q3 and the Audi Q3 Sportback are manufactured at a plant in Tianjin in northern China, which opened in 2018.

Qingdao is the youngest location in the production network of FAW-Volkswagen. Opened in 2018, the plant is situated in Jimo, around 60 kilometers from Qingdao. The first Audi models to be manufactured there are the A3 Sportback and the A3 L Sedan, since 2020. In addition to automobile production, the plant also possesses manufacturing facilities for high-voltage batteries.

Chinese partner SAIC manufactures Audi models at two of its plants in Anting/Shanghai: In September 2021, series production commenced on the Audi A7 L at “Plant No.3” of SAIC Volkswagen. 3,323 employees work at the site, which has a total area of 448,900 square meters.

Since November 2021, the manufacturing facility for electric vehicles in Anting/Shanghai has been making an all-electric Audi model exclusively for China in the form of the Audi Q5 e-tron. The plant covers a total area of 406,000 square meters and has over 900 employees. Production at the electric vehicle plant encompasses five segments of passenger car manufacturing: pressing, body construction, paintwork, assembly, and battery components.

Audi and FAW jointly manufacture the all-electric Audi e-tron, Audi Q2 L e-tron, and plug-in hybrid Audi A6 L TFSIe models. In 2022, the portfolio of battery electric vehicles (BEVs) will be expanded to include the Audi Q4 e-tron, which will also be manufactured on site, and the Audi e-tron GT, which will be imported. Together with its partner SAIC, Audi is offering the Q5 e-tron as a market-exclusive model. As the next step in its electrification strategy, the Audi FAW NEV Company in Changchun will manufacture all-electric medium- and top-range models based on the Premium Platform Electric (PPE).

To quickly build up nationwide charging infrastructure, Audi is relying on collaboration with other automotive companies via a third-party charging network operator. Through the joint venture CAMS New Energy Technology Corporation Ltd. (CAMS), in which Volkswagen also has a stake, Audi currently offers its customers over 6,000 charging points for public charging in 80 Chinese cities; it is planned to expand the charging network by 2025 to more than 17,000 charging points.

Audi models in China are sold through the joint venture partner FAW and since 2021 – for the China-only A7 L and Q5 e-tron models – through the partner SAIC. As of February 2022, Audi is represented in China with more than 650 dealerships. SAIC-Audi offers market-specific models that are sold via an online sales model and urban showrooms. Managed by the Audi Sales Division (ASD) at FAW-Volkswagen, the sale of FAW-Audi models comprises more than 600 dealerships in over 200 cities. In addition to the Audi models manufactured on site (A6 L, A6 L TFSIe, A4 L, Q3, Q3 Sportback, Q5 L, Q5 L Sportback, A3 Sportback, A3 Sedan, Q2 L, and Q2 L e-tron), almost 30 further models are available ad imports in China. Servicing and maintenance of SAIC Audi models are included in the existing dealership network of FAW-Audi.

Together with partner SAIC, Audi set up pop-up stores and urban showrooms in inner-city locations for a modern brand and customer experience. Furthermore, a House of Progress was opened In Shanghai in January 2022 as a central brand experience center.

As one of the market leaders for premium models, Audi sets standards in customer satisfaction and once again scored highly in the 2021 Customer Service Index (CSI) study by J.D. Power as the best premium brand.

Since 2013, Audi has relied on its own local development team in China, which develops market-specific models and technologies. A total of around 1,400 developers in China are working on market-specific Audi technologies at Audi China, the Volkswagen Group China, joint venture partners, and external partner companies.

In addition, Audi uses synergies within the VW Group in China and works with the corporation-wide Hub CARIAD software hub.

In the areas of connectivity and infotainment in particular, Audi is expanding its cooperation with local tech companies and start-ups.To this end, Audi China R&D is collaborating with leading Chinese tech companies, such as Tencent for integration of WeChat functionalities into Audi models. The Android-based open service platform seamlessly integrates apps and WeChat mini-programs into the MMI and allows third-party providers to develop customized WeChat mini-programs for the Audi MMI.

In the Chinese metropolis of Wuxi, Audi tested fully automated driving using 5G and V2X communication at the end of 2021. It was the world's first V2X demonstration of fully automated Level 4 driving on public roads. V2X stands for “Vehicle to Everything.” The technologies enables vehicles to connect directly with each other, with the infrastructure, and with other road users.

Since 2020, moreover, Audi possesses a license for the testing of automated driving functions in Beijing at Level T3.