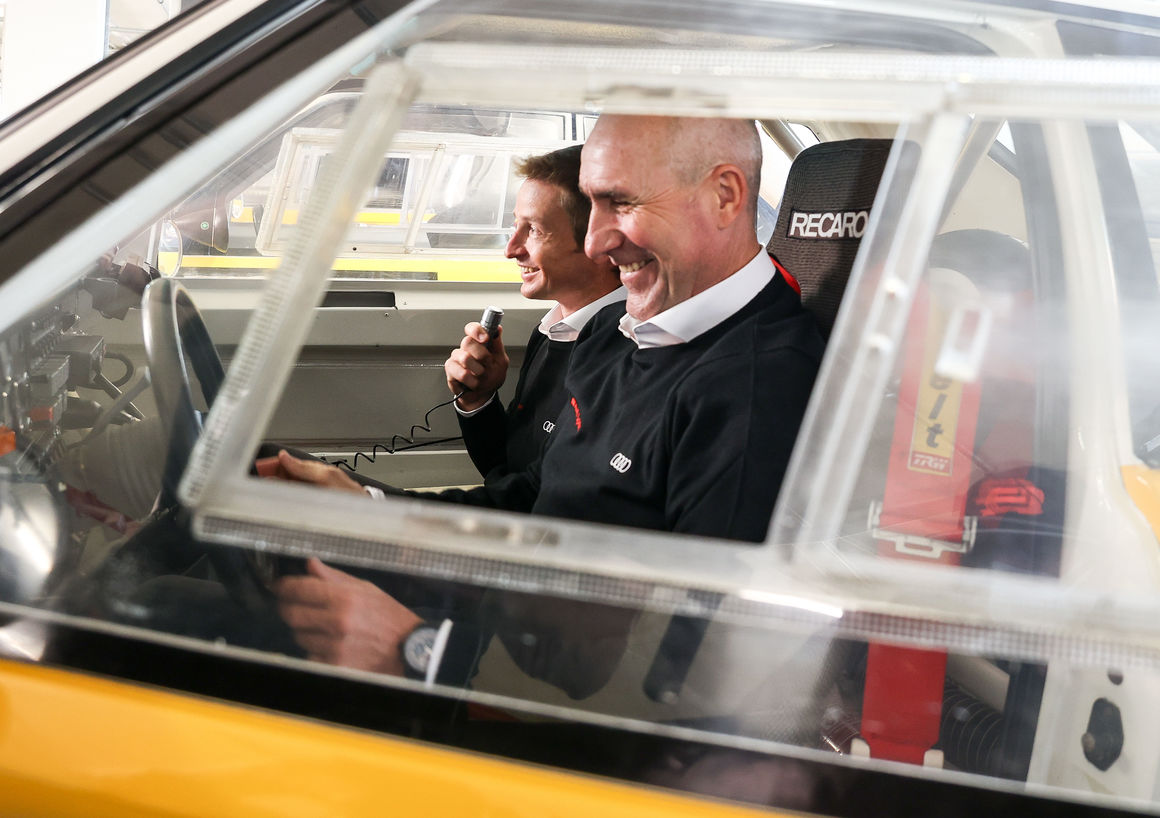 Stéphane Peterhansel has won the Dakar Rally a total of 14 times. The Frenchman has won six times in the saddle of a motorcycle and eight times at the wheel of a car. And he continues to burn with passion for the rally raid classic.

Becoming the first Dakar winner with an electrified powertrain: That and nothing less is what appeals to Stéphane Peterhansel about his first collaboration with Audi to date. “This is probably the last step I can take as a professional driver. That would be perfect for me,” says the 56-year-old Frenchman. For him, it’s about the next big challenge.

Challenges have been the linchpin for Stéphane Peterhansel since he was a child. At the age of eight, his father, a motocross racer, gave him his first motorcycle. At the age of 18, the top talent competes in his first championship with an enduro machine and becomes the champion straight away. In 1988, when Peterhansel was 22, he made his Dakar debut as a factory driver. Although 18th place is not at all to his standard, he now knows for certain: “This is my race. And now I want to win it!”

He managed that a total of 14 times between 1991 and 2021. Since then, many things have changed at the Dakar Rally. After its beginnings in Europe and Africa in 1979, it was staged in South America from 2009 until 2019 and has had its third stage in Saudi Arabia since 2020. Even for record winner Peterhansel, time has never stood still. Since 1999, after his sixth Dakar victory on a motorcycle, he has been taking part in the mother of all rally raids in cars. His Dakar record so far includes eight victories on four wheels.

But one thing has remained the same for Stéphane Peterhansel after his 33 starts in the marathon classic, which has been held 42 times so far: “The adventure. The permanent fight. Against the terrain, the dunes, the rocks, the sand, the dust. And of course, fighting against the clock and against the competition.” In every Dakar Rally, he has found all the feelings that were and are vital for him: adrenaline, speed and fascination for the spectacular landscapes.

In addition, Mister Dakar is certain without any discussion: “Whoever tackles this race should not be crazy at all. Otherwise you won’t make it to the finish.” Therefore, “I try to calculate every risk at the Dakar Rally.” But even for Stéphane Peterhansel, the incalculable is always palpable there: “Every Dakar kilometer can become a trap. You can always make a mistake.”

For the Frenchman, Audi’s first Dakar project comes at exactly the right time. “We are on the threshold of a new generation of cars. That’s why I’m really very proud and happy to be part of the entry of the first electrified vehicles at the Dakar Rally,” stresses Peterhansel. “Audi has already achieved and won so much in motorsport. Forever unforgettable for me are the rally successes of the Audi quattro in the early 1980s and the equally incredible Audi dominance in the Le Mans 24 Hours and in the World Endurance Championship in the 2000s.”

“The Dakar is really a good test for Audi and its new technology,” says Stéphane Peterhansel. Because: “If you can make it in the Dakar Rally with an electrified car, you can make it around the world with it.” With all the knowledge and experience of Audi’s technicians and the personnel of the Q Motorsport team, which is operationally running the Dakar entry for Audi Sport, Peterhansel says the best conditions have been created for the joint project. As a driver, he has cooperated with the Q Motorsport managers for most of the time since 2009.

Stéphane Peterhansel is particularly looking forward to Audi’s electrified powertrain. “The electric drive responds directly to the accelerator pedal and gives a great driving experience,” says the Dakar record holder. “Especially in the dunes, this should provide advantages over the more indirectly responsive combustion engines.”

Peterhansel will work ten to twelve hours a day in the closed Audi cockpit for two weeks during the 43rd edition of the Dakar Rally in early January 2022.” If at 56, I want to perform at the same level as I did 30 years ago, I’ll have to train twice as much as I used to,” the veteran notes regarding his age. His motivation, on the other hand, needs no extra effort: “For me, this is still the best job. More than that, it’s my total passion.”

Stéphane Peterhansel has shared this passion with his German wife Andrea (née Mayer) for 17 years. Like her husband, she has been active on two and four wheels in off-road marathons, including the Dakar Rally. “Our big dream was to contest the Dakar Rally together in one car and to win it as the first married couple in the world,” says Stéphane Peterhansel. They finally gave up on that plan in 2020. “Andrea’s motion sickness affects her too much as a co-driver on such long distances as in the Dakar Rally,” says Peterhansel.

The most successful Dakar driver of all time prefers to spend his free time in nature. “We live in Switzerland in the middle of the forest with a view of the Matterhorn and Mont Blanc, two of the most famous and beautiful mountains in Europe,” says Stéphane Peterhansel. “From there, we very much enjoy extensive trips by mountain bike and on skis.”