The Audi A2 concept 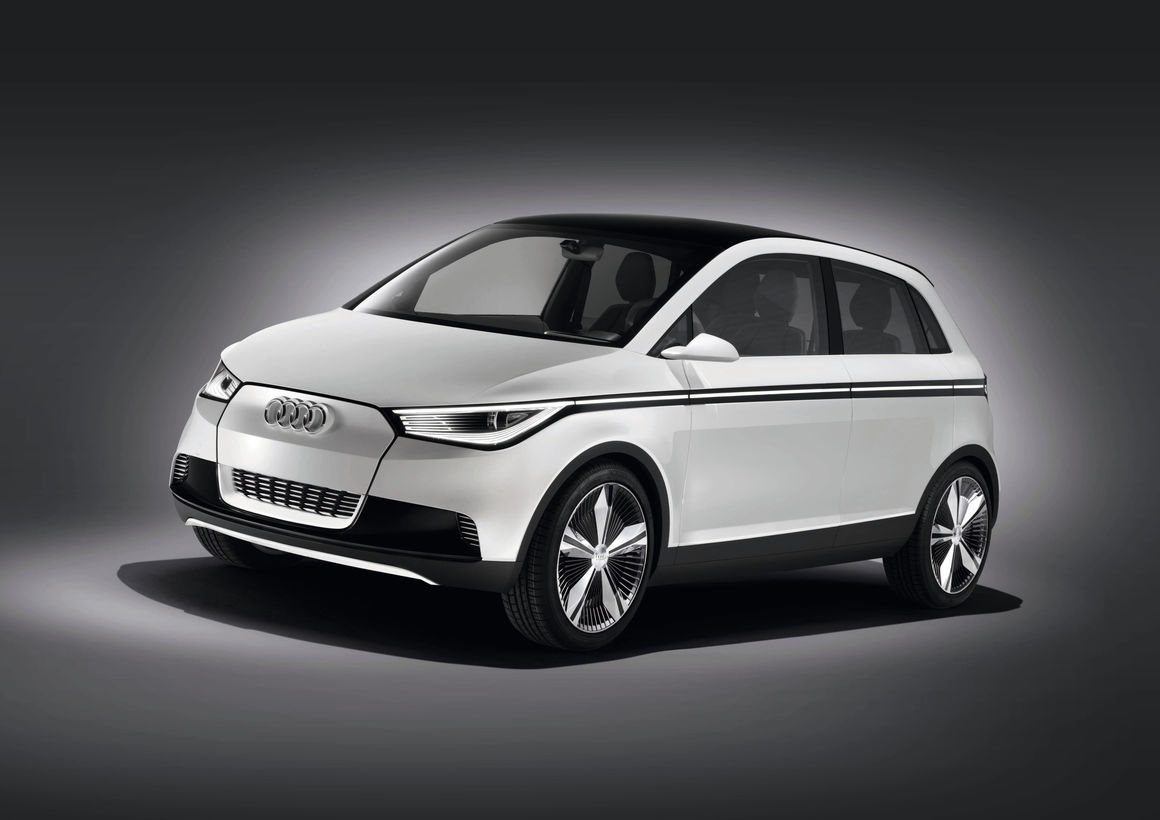 With the A2 concept technology study, Audi is offering a peek at electric driving in the megacities of the future. The purely electric powered A2 concept is a classic space concept: a premium vehicle for metropolitan areas featuring generous amounts of space and composed road manners.

Exterior design
The Audi A2 concept demonstrates the complete skill set of the Audi designers in a compact space. It is just 3,804 millimeters (149.76 in) long, 1,693 millimeters (66.65 in) wide and 1,494 millimeters (58.82 in) high; even so, it makes it makes and elegant, powerful and sporty impression on the road. As is typical for Audi, its clean appearance concentrates fully on the essentials.

The opaque glass roof of the show car finished in flat Electric White becomes transparent at the push of a button. When an electric voltage is applied, small particles integrated into the glass align so that the light can pass through the glazing unhindered. When the glass roof is darkened, however, it blocks the infrared component of the sunlight almost completely, effectively shadowing the interior. This is a further contribution to efficient temperature management in the purely electric powered Audi A2 concept.

As with every Audi, the front of the technology study is dominated by the single-frame grill, in this case, in a special version tailored to electrical operation. The upper two-thirds are designed as a closed, folding surface, behind which are the charging socket and the cooling water connection. The four Audi rings are intensively sculpted; the engine hood is permanently bolted to the body.

Mounted in the lower section of the single-frame grille, which acts as an air inlet, are highly efficient cooling elements made of graphite foam. The lightweight mineral is an excellent conductor of heat from the water to the ambient air. Eight blocks with six graphite elements each are located in the central air inlet.

Another highlight of the A2 concept are the matrix beam LED headlights. An entire bundle of small light-emitting diodes arranged one above the other produce the low beam and high beam light. Microreflectors enable the precise positioning of the light. The LEDs can be switched on and off independently to illuminate the road perfectly in any situation. Numerous mini-LEDs set in the lower section of the headlight like a pearl necklace produce the daytime running light.

The side view of the technology study is also typical Audi, with brawny wheel wells, a low greenhouse and an early-sloping roof line that ends in a long rear spoiler. Sharp lines frame tautly arched sheet metal surfaces. The dynamic line above the sills rises distinctly; the tornado line below the windows runs slightly upward. Just below the tornado line is a characteristic feature of the Audi A2 concept – the Audi dynamic light: a band of light that connects the headlights with the tail lights.

Light-emitting diodes and light guides produce the Audi dynamic light. When in standby-mode, the several centimeter-wide band appears black. When the owner of the Audi A2 concept approaches, it lights up blue in welcome and focuses on the door handles, which are inset into the band and extend when the driver swipes a hand over them.

The dynamic light shines bright orange when the A2 concept is driving. It pulses on the corresponding side when indicating a turn, and when braking, a red pulse of light runs along the flank as a warning for other road users.

The tail lights also use matrix beam technology. They are adaptive: The system uses a sensor to detect how good visibility is and adjusts the brightness accordingly.

Five laser diodes produce the rear fog light. When visibility is good, their light is invisible. In the fog or rain, however, it strikes the water particles in the air and becomes clearly visible as a floating triangle.

Interior
The interior also reflects the philosophy behind the Audi A2 concept. It is light, clean, open, and spacious with intuitive controls. The dashboard is split into two sections, with the semi-circular left section enclosing the driver’s area. The Audi dynamic light runs along the edges in two separate arcs from the doors to the cockpit. It welcomes the passengers in a manner similar to the light band on the exterior.

The architecture of the interior takes advantage of the possibilities afforded by the electric drive system. There is no center tunnel; the console between the front seats can be lowered to allow free passage through the vehicle. Heating and cooling air flows indirectly and draft-free through a perforated surface beneath the windshield.

The steering wheel of the Audi A2 concept is flattened at the top and bottom, with a single spoke connecting the ring to the impact absorber. The two large horns pointing inward have touch-sensitive surfaces used to control key functions, with only the turn signals and windshield wipers still controlled via the traditional steering column stalks.

If both touchpads are touched at the same time, the A2 concept switches into a semi-autonomous driving mode. This convenience feature is a welcome relief in slow-moving traffic, for example. The driver maintains full control of the vehicle at all times, exactly like with today’s ACC stop & go system on which the new technology is based.

An open, shell-like section serves as the steering column and extends horizontally into the cockpit. On the far end is a seven-inch display flanked by two secondary displays with the speedometer and the power meter.

When the driver pushes the button to activate the electric drive, an animated band of light encircles the driver and passenger, and two touchpads fold up to the right of the steering wheel. The small touchsurface on the left is for shifting gears (shift-by-wire); the larger one on the right is reserved for the air conditioning and media functions.

The retractable console between the seats includes an additional touchpad for entering letters and numbers and for secondary functions – a further development of today’s MMI touch. A docking station for the iPhone rounds out the control concept.

The show car has all of the Audi connect technologies on board. The Bluetooth online car phone connects it to the Internet via a UTMS module, a WLAN hotspot lets the passengers surf and e-mail from their mobile devices. The fast data connection delivers specially prepared news and information to the vehicle. The services currently offered by Audi are available for navigation: the map with images from Google Earth, Audi traffic information online, Google POI search via voice control and Google Street View.

Cutouts in the backrests of the four individual seats in the Audi A2 concept give them a sporty look and make them incredibly light. They have an aluminum chassis and the developers used a polymer blow-molding process for the shells. Three struts connect the seats with the floor for more foot room in the back, and there are storage bins beneath the fold-up seat cushions.

A console with storage bins is located between the rear seats. Folding these seats forward reveals a fixture for the fork of a special city bicycle. The luggage compartment of the Audi A2 concept has a sandwich floor. A fold-up frame with two solid, high-load nets covers the lower load level.

The colors and materials in the interior support the impression of lightness and functionality. The large areas from the door top shoulders to the floor are covered in a tough material with a neoprene surface feel. A ribbed material made from recycled polyester covers the central floor area. Aluminum elements accentuate the cockpit.

Technology
The Audi A2 concept is a purely electric vehicle. The lithium-ion battery mounted in the sandwich floor stores 31 kWh of energy, 24 kWh of which are usable. The electric motor is transversely mounted in the front of the vehicle. It delivers 85 kW (116 hp) of peak power (60 kW continuous) and 270 Nm (199.14 lb-ft) of torque (160 Nm (118.01 lb-ft continuous) to the front wheels via a single-speed transmission.

The Audi technology study has a range of 200 km (124.27 miles) in the European driving cycle. It takes roughly 1.5 hours to fully recharge the battery with 400 volt three-phase current and approximately four hours with 230 volt household current. The Audi A2 concept is also designed for the new contactless charging technology (Audi Wireless Charging).

The show car weighs less than 1,150 kilograms (2,535.32 lb). This is due primarily to its body, which features the most advanced state of Audi’s ultra-lightweight construction. The A2 concept marks the first time that the ASF has been combined with hybrid multimaterial construction, in which very different materials are combined with one another. In this case, the superstructure is made largely of aluminum components and is complemented by add-on parts of carbon fiber-reinforced polymer (CFRP).

The Audi A2 concept is an agile vehicle. It accelerates from 0 to 100 km/h (62.14 mph) in 9.3 seconds; top speed is limited to 150 km/h (93.21 mph) in the interest of range. A McPherson strut front suspension and a torsion beam axle in the back provide for agile handling. The steering and brake systems are purely electric (steer-by-wire and brake-by-wire), requiring no mechanical or hydraulic connection to the steering wheel or the pedals, respectively.

The 18-inch wheels are fabricated using cladding technology. The alloy base wheel and the cladding are manufactured separately and bonded together, greatly reducing the amount of material used. The new hybrid technology, which Audi already uses in some production models, saves roughly two kilograms (4.41 lb) per wheel. The wheels of the A2 concept combine the blade look of the e-tron family with Audi’s classic spoke design.