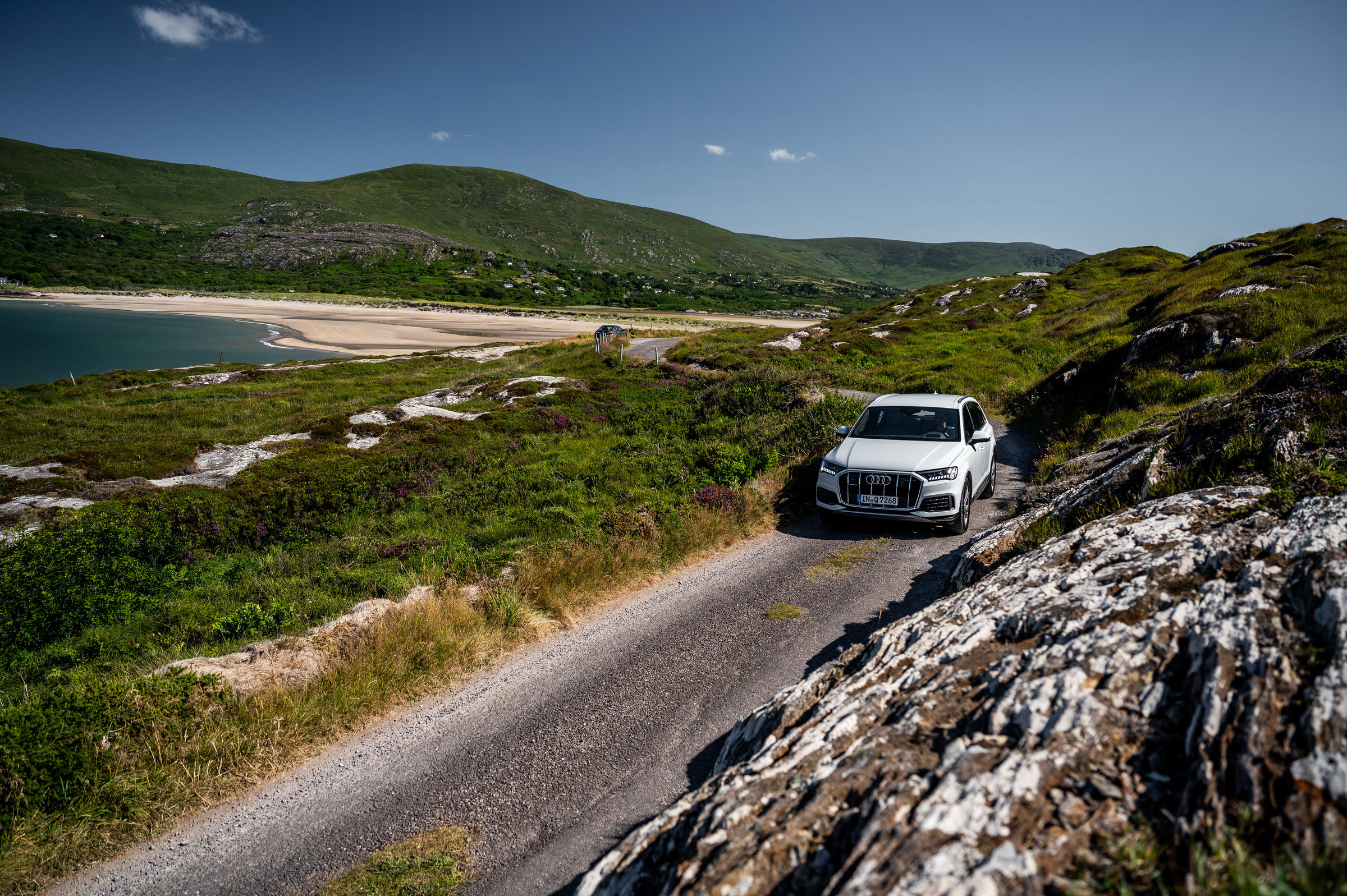 Audi has substantially enhanced the dynamic attributes of the Audi Q7. The confident ride comfort remains unchanged. In addition to the optimized all-wheel steering, the electromechanical active roll stabilization can be used as an option. Thanks to this combination, the large SUV is extremely maneuverable, precise, and agile on curvy country roads. Even when driving in urban traffic, the Audi Q7 makes full use of its maneuverability. In contrast, the Q7 behaves as a highly comfortable, poised touring SUV with excellent ride comfort on freeways – particularly in conjunction with the adaptive air suspension. It also provides variable ground clearance and prepares the Audi Q7 with its standard quattro drive for terrain off the beaten track.

The Audi Q7 features electromechanical, speed-sensitive power steering as standard. It provides differentiated feedback from the road, and responds spontaneously and with great precision. It provides excellent assistance while maneuvering, which is reduced as the speed increases. The large SUV is even more maneuverable with the optional all-wheel steering, which is managed by the electronic chassis platform. It is available as part of the advanced suspension package or as an individual option. The front-axle steering ratio is very direct at 13.3:1; it takes just 2.4 steering wheel turns from lock to lock, instead of 2.9. Activated by an electric spindle drive via tie rods, the rear wheels turn by up to 5 degrees in the opposite direction at low speed, which increases agility and reduces the turning circle. On the highway these wheels move slightly in the same direction to promote stability.

In addition to all-wheel steering, the advanced suspension package includes a second high-tech system: electromechanical active roll stabilization. There is a compact electric motor that generates up to 3 kW of power between each of the two halves of the stabilizer on each axle. When driving straight ahead, the suspension control ensures that both halves of the stabilizer act largely independently of one another. This reduces the sprung mass vibrations on uneven roads, thus increasing ride comfort. At sporty paces, however, the focus is on the greatest possible roll compensation. The halves of the stabilizer act as a unit and are twisted in opposite directions by the transmission of the electric motor; the roll angle is reduced significantly when cornering, and the handling of the Audi Q7 becomes even more firm and dynamic. The electromechanical active roll stabilization draws its power from the powerful 48-volt main electrical subsystem. Using the forces of the stabilizers as a basis, the electric motors can generate power and thus feed power back to the battery.

Audi equips the new Q7 with a balanced steel spring suspension as standard. Adaptive air suspension is available as an option and is installed as standard for all seven-seaters. With the S line exterior, the customer receives the slightly firmer adaptive air suspension sport. Because of this, the body is 15 mm (0.6 in) lower when at the normal level. The air suspension can be varied between four modes with the Audi drive select dynamic handling system. Depending on the driver’s requirements and the driving situation, it varies the level position of the body by up to 90 millimeters (3.5 in) and also offers level control. On highway journeys, the ride height is lowered automatically by up to 30 millimeters (1.2 in) (by about 15 millimeters (0.6 in) with the sport air spring) depending on the road speed, improving aerodynamic drag and, in turn, efficiency. When driving off-road at low speeds, up to 60 millimeters (2.5 in) of additional ground clearance can be selected via the “Raise” function in Audi drive select.

The standard Audi drive select dynamic handling system allows drivers to vary the character of their Q7 between seven modes. These modes are called auto, comfort, dynamic, efficiency, individual, allroad, and offroad, with the latter being available only in combination with the air suspension. Audi drive selects accesses the engine and transmission management systems, steering assist, and the dampers of the adaptive air suspension, for example. The dampers and the electromechanical active roll stabilization are regulated via the electronic chassis platform. As the central control unit, it collects all key data about the movement of the car and the chassis systems involved. From these, it quickly calculates and precisely coordinates the optimal function of these components.

Off the beaten track: Offroad mode and hill descent control

Off-road, the Audi Q7 benefits from the quattro drive, the short overhangs, and the large ground clearance – a maximum of 245 millimeters (9.6 in) with the adaptive air suspension and 185 millimeters (7.3 in) with the standard suspension. In the offroad mode of Audi drive select, the Electronic Stabilization Control adapts its regulatory activities to the conditions that exist off the beaten track. On loose surfaces, it ensures increased traction and optimized brake interventions. The standard hill descent control is also active in offroad mode. In all other drive select modes, it can be activated separately. It constantly maintains the speed specified by the driver up to 30 km/h (18.6 mph)) on downhill gradients of more than six percent. The tilt angle is displayed in the MMI operating system. The angle of approach is 23.6 degrees, the angle of departure is 21.6 degrees, and the breakover angle is 18 degrees.

The front and rear axles of the large SUV are designed as five-link suspension. As a result, they can handle the longitudinal and lateral forces acting there separately. The linkages and the subframes are made largely of light aluminum. The track width is 1,679 millimeters (5.5 ft) at the front axle and 1,691 millimeters (5.6 ft) at the rear axle.

18-inch wheels with 235/65 tires come standard, with the option of up to 22 inch wheels with 285/35 size tires. The vehicle is equipped with a 17-inch brake system with single-piece brake discs and an aluminum six-piston fixed caliper at the front as standard. The brake disc chambers and the discs are made of cast iron. They have a diameter of 350 millimeters (13.8 in) at the front and 330 millimeters (13.0 in) at the rear. All seven-seaters and the Audi Q7 55 TFSI are equipped with a two-piece 18-inch brake with aluminum brake disc chambers and a cast iron friction ring. The latter is thermally and mechanically decoupled from the brake disc chamber, which allows it to expand freely when heat develops. The discs have a diameter of 375 millimeters (14.8 in) at the front axle and 350 millimeters (13.8 in) at the rear axle. As a visual eye-catching feature, the brake calipers for the S line model are also available in a red paint finish. Carbon fiber-reinforced ceramic brake discs with specially developed cooling ducts are also available for drivers with special requirements. They are extremely light and wear-resistant, and their calipers are painted in anthracite gray.