Skip to content
We are using cookies for a better user experience.
11/25/19
Neuburg a. d. Donau
Sports 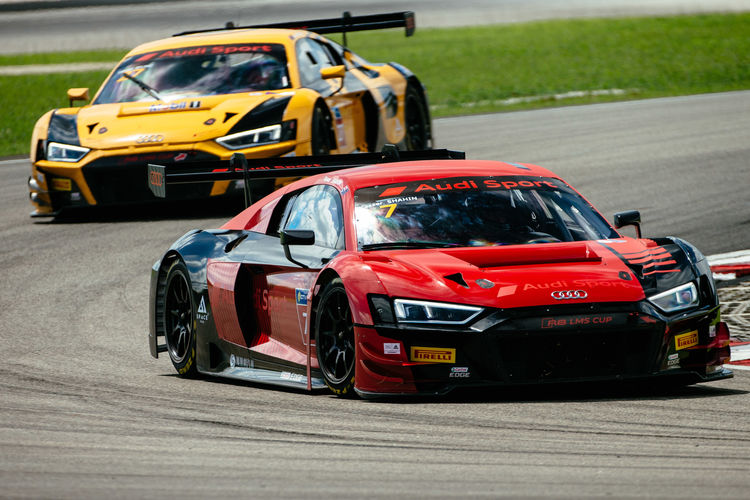 Yasser Shahin has won the Audi Sport R8 LMS Cup at the finale in Malaysia. After the one-make cup has ended, 2020 will mark the beginning of a new motorsport era for Audi Sport customer racing Asia, in which privateers can look forward to an attractive incentive program.

Change of eras in Asia: For Audi Sport, an era has ended in Asian GT racing – and a new one begins. After eight successful years, the final title decision in the Audi Sport R8 LMS Cup was produced in Malaysia. Yasser Shahin won the one-make cup in an Audi R8 LMS with a strong showing at Sepang. From the second spot on the grid in the first of two sprint races, the Australian initially drove through the spray of the car in front driven by Andrew Haryanto. In turn ten, Shahin took the lead as early as on the first lap, maintained his rhythm even during a safety car period and went on to celebrate his second victory this season with a one-second advantage. The runner-up’s spot went to Alex Au, who had started from fifth on the grid and thus kept his title chances open up until the second race on Sunday. Daniel Bilski improved in the race by one position to finish third. On Sunday, Andrew Haryanto achieved a dominant lights-to-flag victory with a twelve-second advantage ahead of Alex Au, while Daniel Bilski placed third again. Fifth position was enough for Yasser Shahin to score the title win ahead of Alex Au. In the GT4 classification, Anderson Tanoto won the first sprint event while Sheng Yanwen, on claiming victory in the second race, also secured the title in this class. In 2012, the Audi Sport R8 LMS Cup was the first and so far only one-make cup for GT3 race cars and has furthered the careers of many talents in Asia. Audi Sport customer racing Asia is responding to the fundamental changes the highly varied GT motorsport scene has seen in Asia with a new program beginning in 2020. The Audi Sport Asia Trophy will reward all privateers for their successes achieved on all levels of racing. Via a points-based distribution system, the best drivers will be awarded prizes worth 100,000 euros plus the chance of a free participation in the Suzuka 10 Hours in 2021.

Podium on Phillip Island: In the finale of the Australian club racing CUE Enduro Super Series, an Audi Sport customer team achieved a podium finish. In the one-hour race, Gary Higgon and Dean Canto in an Audi R8 LMS ultra of the KFC team clinched third place on Phillip Island.

New exhibit at Bathurst: Starting this week, visitors of the National Motor Racing Museum at Bathurst will be able to admire a model from Audi Sport customer racing that has made history in Australia. For six months, the museum located at the legendary circuit at Mount Panorama will be displaying the Audi R8 LMS, the model with which Audi competed in the Bathurst 12 Hour since the 2011 season. The Melbourne Performance Centre – Audi Sport customer racing’s satellite in Australia – provided the GT3 sports car with the kangaroo wrap exactly matching the look of the winning model from 2012. Seven years ago, Christer Jöns, Christopher Mies and Darryl O’Young won the endurance race with Phoenix Racing. With a track record of three victories so far, Audi has been the most successful manufacturer in the GT3 era of this race that began there in 2011. Hence a “jubilee” is coming up on February 2, 2020: that’s when the Audi R8 LMS will compete in this endurance race for the tenth time.