Seven Audi sports cars in ‘Down Under’ adventure 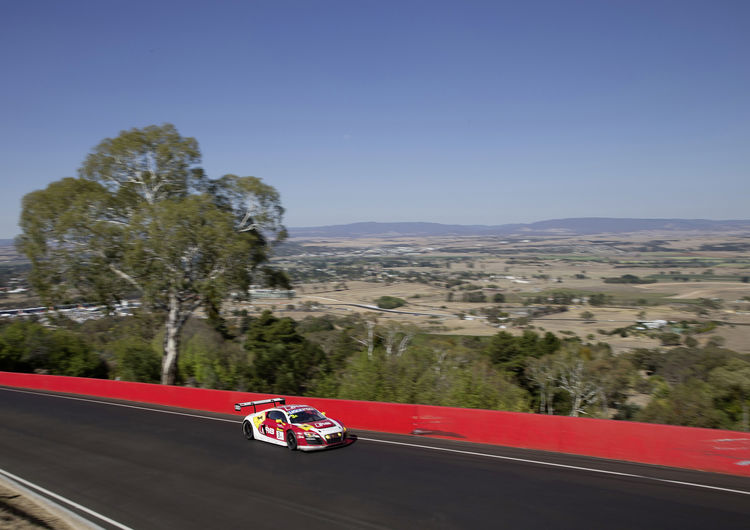 Adventure in ‘Down Under:’ In the 12-hour race at Bathurst, Australia, on Sunday (February 8), five Audi customer teams fielding seven Audi R8 LMS ultra cars will be tackling one of the world’s toughest challenges in endurance racing.

GT sports cars have been admitted to the 12-hour race at famous Mount Panorama since 2011. “The race has become increasingly popular with fans and entrants ever since then,” says Romolo Liebchen, Head of Audi Sport customer racing. “Following Audi’s victories in 2011 and 2012, our customer teams will again be battling to prevail against the competition that has become even stronger.”

The 6.12-kilometer roller-coaster circuit at Bathurst, some 200 kilometers west of Sydney, is regarded as very demanding. The track partially includes public roads and features inclines of up to 16 percent. The vertical difference between the highest and the lowest point of the tradition-steeped circuit amounts to 174 meters. The turns, which in some cases are very narrow, call for maximum driving skills and the two straights with lengths of 1.11 and 1.92 kilometers are perfectly suited for overtaking maneuvers.

“The relatively narrow track with its mix of fast and slow turns, plus many inclines, is very special and doesn’t forgive any mistakes. We need to drive with high precision because there are some sections without large run-off areas,” says Christopher Mies (D), who in 2011 and 2012 won with Audi at Bathurst and in the team of Mark Cini (AUS) is sharing the cockpit with two local heroes this time. “We’re expecting a fierce competition and have got to make use of every centimeter on the track. It’s probably going to be difficult to extract everything in qualifying because with 50 cars on the relatively short track we typically drive in dense traffic.”

A total of 29 GT3 sports cars from nine different manufacturers, including seven Audi R8 LMS ultra cars, are on the entry list. The German Phoenix Racing team is fielding two cars adorned with Australian animals and rain forest designs befitting the adventure in ‘Down Under.’ Laurens Vanthoor (B), the champion of the Blancpain Endurance Series and Blancpain GT Series, is competing together with the winner of the 24-hour races at Spa and at the Nürburgring, Markus Winkelhock (D), and the runner-up of the Italian GT Championship, Marco Mapelli. “Bathurst is a real challenge,” says Vanthoor, who took fifth place in the best Audi last year. “Since the race lasts from morning to night we’re struggling with the heat. But we’ve got the potential for victory. We need to do a good job now and can’t afford to make any mistakes.”

The second Phoenix Audi will be shared by extreme athlete Felix Baumgartner (A) and Christopher Haase (D), the winner of the 2014 24-hour race at the Nürburgring, and ex-Le Mans winner Stéphane Ortelli (MC). The local teams, Jamec PEM Racing, Fitzgerald Racing and Skwirk, are completing the Audi line-up.

Free live streaming of the race will be available at www.bathurst12hour.com.au.

The Audi customer teams at Bathurst