Quotes after qualifying at Moscow 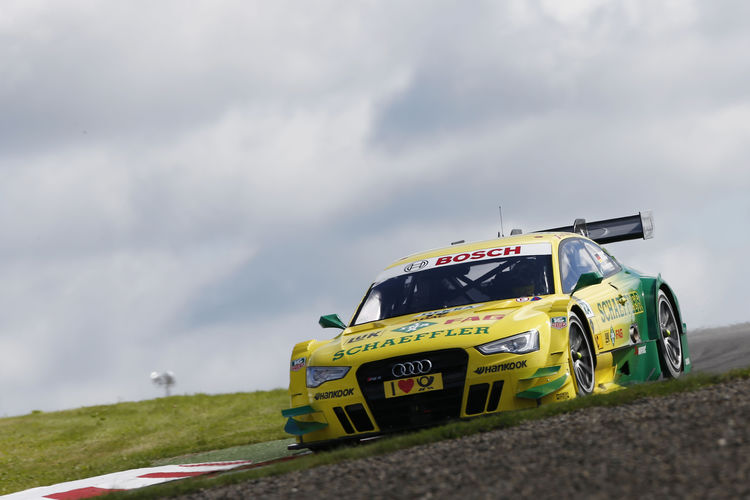 Two Audi RS 5 DTM cars are starting from the front row at the DTM premiere in Russia – quotes after qualifying.

Dr. Wolfgang Ullrich (Head of Audi Motorsport): “The safety of the drivers clearly comes first. That’s why it was only logical to end the qualifying session after Q3 once the rescue helicopter had been grounded. We’ve got two cars on the front row and ‘Rocky’ on the pole position – that’s a very nice result for Audi. If you look at how qualifying developed it’s probably no coincidence that Mike (Rockenfeller) and Mattias (Ekström) are on the front row.”

Dieter Gass (Head of DTM): “Obviously, we’re very happy about the front row of the grid at the DTM’s Russian premiere – even though it feels a bit like ‘unfinished business’ because we couldn’t drive Q4. But even there we’d have had a good chance because we were in contention at the front in all the sessions.”

Mike Rockenfeller (Schaeffler Audi RS 5 DTM), grid position 1
“I’m very happy about the pole position. At the end, it was strange that we didn’t drive Q4. But up to that point it had been a normal qualifying session and everybody had to deliver their performance. The car was great. My thanks go to my team: After free practice, I wasn’t satisfied but we made the right decisions. I believe we deserve being on pole, even though I’d have liked to have driven Q4.”

Mattias Ekström (Red Bull Audi RS 5 DTM), grid position 2
“It’s always nice being far at the front in qualifying. Perhaps even more would have been possible today in Q4. Particularly today: My Audi was very good, it was huge fun to drive. Every time I was out on track I was beaming at the wheel and enjoyed it. Second place on the grid is really good. I’m looking forward to the race and hope that I can really score tomorrow.”

Jamie Green (Red Bull Audi RS 5 DTM), grid position 5
“The Audi RS 5 DTM seems to fit well with Moscow Raceway. I’m pretty pleased even though, as one could see, a bit more would have been possible. But the qualifying session was close, as expected. Position five on the grid on the whole is a good starting base and that’s why I’m optimistically looking toward the race tomorrow.”

Miguel Molina (Audi RS 5 DTM), grid position 11
“It wasn’t a bad qualifying session. We improved on track each time. When I returned to the pits after Q2, I was still in Q3, then I was eliminated because Pascal Wehrlein was credited with one lap. We’re starting from eleventh place. That’s a decent starting base for driving a good race tomorrow.”

Adrien Tambay (Audi ultra RS 5 DTM), grid position 12
“It could have gone better. My best lap that I would have made it into Q3 with was cancelled. I crossed the white line with all four wheels – that’s prohibited by the regulations. Twelfth place isn’t bad but it’s not what we were shooting for either,   because in Q1 we were in fourth place. Now I’m determined to push in the race.”

Filipe Albuquerque (Audi Financial Services RS 5 DTM), grid position 13
“The car wasn’t quite as good as it had been in free practice but more than this result would still have been possible in qualifying. Unfortunately, I made a mistake in the last turn of my fastest lap; otherwise it would arguably have been enough for Q3.”

Timo Scheider (AUTO TEST Audi RS 5 DTM), grid position 14
“In the end, I was lacking five hundredths of a second for Q3. But we knew that it would be very close here. I wasn’t completely happy with the rear axle today. But with the gaps being as close as they were it’s hard to judge why we lost time.”

Edoardo Mortara (Playboy Audi RS 5 DTM), grid position 16
“It was a weak qualifying session for us. Before qualifying started I was very confident. But then it just didn’t work out. I tried to drive a fast lap but it wasn’t possible. We simply weren’t fast enough.”

Hans-Jürgen Abt (Team Director Audi Sport Team Abt Sportsline): “That the qualifying session had to end early because the rescue helicopter was grounded due to the air space being blocked is definitely unusual. But naturally Audi can be highly pleased with the front row of the grid. From the team’s perspective, not only ‘Eki’ (Mattias Ekström) in second place is well-positioned but so is Jamie Green in fifth place. The squad is poised and we’ll try and bring this home tomorrow.”

Ernst Moser (Team Director Audi Sport Team Phoenix): “A crazy qualifying session with a happy ending for us.  But ‘Rocky’ (Mike Rockenfeller) did have the speed to decide Q4 in his favor as well. That’s why I think that he deserves being on pole. That ‘Eki’ (Mattias Ekström) is side by side with him will no doubt help us: That’s a superb starting base. For Miguel (Molina), it was unfortunate that he was retroactively reclassified to eleventh place and not allowed to start in Q3 anymore. I’m sure that even more would have been possible there because he’d consistently been improving.”

Arno Zensen (Team Director Audi Sport Team Rosberg): “Congratulations to Mike Rockenfeller and Mattias Ekström. Of course, the front row is sensational. Things were going well this morning and we were optimistic. We’ve got to analyze why we couldn’t continue that way in qualifying.”