Eager anticipation of DTM home round at Norisring 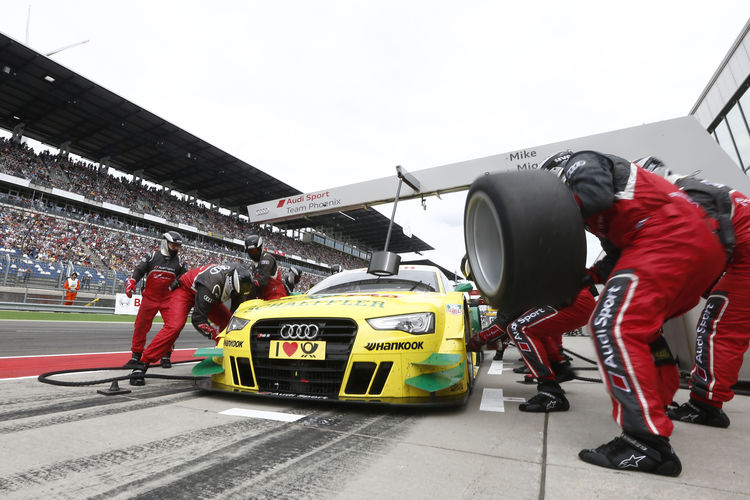 A full grandstand made of stone, thousands of Audi flags and a unique atmosphere between the Dutzendteich lake and the paddock: The entire Audi team is looking forward to the DTM home round with eager anticipation. With a strong performance by the whole squad the drivers and teams are aiming to bring Audi’s first victory at the Norisring since 2002 home to Ingolstadt.

Only 75 kilometers, as the crow flies, separate the Audi headquarters in Ingolstadt and the race track in the heart of Nuremberg. Accordingly, there is a large fan community of employees and followers who support the Audi line-up year after year. In 2013, the Audi Sport Teams Abt Sportsline, Phoenix and Rosberg are leaving no stone unturned to give the ‘Audians’ a good reason to celebrate on Sunday.

The last Audi victory at the Norisring was clinched by Laurent Aiello in June 2002. His duel with DTM record champion Bernd Schneider across the entire race distance of 44 laps back then is still regarded as one of the most spectacular races in DTM history and ended in an advantage of 0.197 seconds. Although Mattias Ekström and Timo Scheider mounted the podium six times since then, another victory has not been clinched there to date. Newcomer Jamie Green is bringing four triumphs to the squad at the only city street race on the DTM calendar. The Briton won in 2008, 2009, 2010 and 2012, thus acquiring the nickname ‘Mister Norisring.’

At the Norisring in particular, the Drag Reduction System (DRS), which allows the angle of the rear wing to be flattened by pushing a button on the steering wheel, will be an important factor in the battle for victory. Especially at the end of the long start-finish straight, the race drivers when braking into the Grundig turn have an ideal opportunity for overtaking. The option tires, which may only be used during the race, provide the strategists with another thrilling tactical tool. As the race track, which only has a length of 2.3 kilometers, uses roads with different types of asphalt and concrete surfaces that are normally open to regular traffic tires are a particularly interesting topic.

The Audi squad will be enjoying prominent support in a spirit of friendship by Tom Kristensen. The Le Mans record winner, who just won the legendary 24-hour race in France for the ninth time, is visiting his brand colleagues at the Norisring. Kristensen himself competed in the DTM from 2004 to 2009 and finished all of his six races in Nuremberg in the top eight. On the weekend, the Dane will be driving his Le Mans winning car, the Audi R18 e-tron quattro, across the race track for a few demo laps.

Tickets for all DTM races of the 2013 season are available at www.audi-motorsport.com/dtm. Fans in many countries of the world can watch qualifying and the race live on the DTM’s YouTube channel at www.youtube.com/dtmint live. A total of 39 TV channels air live DTM coverage in 141 countries.

Dieter Gass (Head of DTM): “It’s a nice feeling to travel to the Norisring as the leader of the standings. All the fans and employees who support us on location always make a race there very special for us, so my wish is for us to be able to clinch the corresponding, positive result. I’m not only focused on Jamie (Green) with his past Norisring victories in this respect. We’ve got a strong team in general and will try and get as many of our guys as possible to the far front of the field.”

Hans-Jürgen Abt (Team Director Audi Sport Team Abt Sportsline): “For us as a Bavarian team, the race at the Norisring naturally is the pinnacle of the season. Our strong wish is to finally give something back to all the fans and supporters. With Jamie (Green) in the team we’ve got a proven Norisring expert in our ranks who may be able to give our squad the crucial impulse in the right direction.”

Ernst Moser (Team Director Audi Sport Team Phoenix): “With Mike (Rockenfeller) we’re traveling to the Norisring as the leader of the standings. Audi’s big aim for years has been to finally win here again – and that’s our big aim again this weekend. We know that in terms of speed we’ve got what it takes to do so.”

Arno Zensen (Team Director Audi Sport Team Rosberg): “The summer break was long enough. Our whole squad is now looking forward to the round in the ‘German Monaco.’ If it were up to me, Edo (Mortara) or Filipe (Albuquerque) would be the drivers to end Audi’s long barren spell there.”

Filipe Albuquerque (28/P), Audi Financial Services RS 5 DTM #6 (Audi Sport Team Rosberg)
•    Contested a round of the GRAND-AM Series in the Audi R8 during the break
•    Is competing in his third DTM season in the same team with the same team-mate
“While in 2012 I often finished in the points the 2013 season has been disappointing for me so far. No matter where I start from – I always end up at the far rear. We’re going to give everything to make sure this will soon change again. The Norisring is a very unusual track – so it may be a good venue for the tables to turn.”

Mattias Ekström (34/S), Red Bull Audi RS 5 DTM #11 (Audi Sport Team Abt Sportsline)
•    Was on podium at the Norisring five times before
•    Is celebrating his 35th birthday on race Sunday
“My aim is victory.  Following a strong qualifying performance, winning the race again for the first time in many years was in our hands last year. But after the first lap of the race it was all over due to a collision. That’s why I’d like to repeat the Saturday this year and am wishing for a smooth race on Sunday. I’m very much looking forward to the Norisring.”

Jamie Green (31/GB), Red Bull Audi RS 5 DTM #12 (Audi Sport Team Abt Sportsline)
•    Won at the Norisring in 2008, 2009, 2010 and 2012
•    At the Lausitzring, scored his first points as an Audi driver
“The characteristics of the Norisrings can’t be compared with any other race track. That’s why it’s difficult to make a prediction about the relative strengths. Naturally, I’ve got a special relationship with this race. But even though I’ve won there four times that’s no guarantee for anything – especially not in the DTM. Before and on the weekend, I’ll be working just as hard as always, prepare myself and set up the car.”

Miguel Molina (24/E), Audi RS 5 DTM #20 (Audi Sport Team Phoenix)
•    Will be advertising the 2013 Audi Cup again on his Audi RS 5 DTM
•    Is increasingly improving his German due to his second residence in Adenau
“It’s been a long time that Audi has won this race. We’re going to give everything to be successful at the home round. We know that we can do it. But we must try and put all the pieces of the puzzle together on a single weekend. We had a bit of time to take a breather and are now traveling to the Norisring with top motivation.”

Edoardo Mortara (26/F/I), Playboy Audi RS 5 DTM #5 (Audi Sport Team Rosberg)
•    With his victories in Macau, is regarded as an expert for city street circuits
•    Contested a round of the GRAND-AM Series in the Audi R8
“After a personally successful season in 2012, it’s hard now having to battle for each single point. At the Lausitzring, we took a step in the right direction. Now I’m hoping for us to be able to continue this way at the Norisring.”

Mike Rockenfeller (29/D), Schaeffler Audi RS 5 DTM #19 (Audi Sport Team Phoenix)
•    Is traveling to the Norisring as the leader of the standings with the same points score as Bruno Spengler
•    Is the only Audi driver to have won a race in the 2013 season so far
“As the only city street circuit on the calendar, the Norisring is something very special. We’ve got a lot of fans there who keep their fingers crossed for us every year. I’m hoping that we’ll finally be able to live up to their expectations. Mercedes-Benz has traditionally been very strong in Nuremberg but this time the cards have been reshuffled, also thanks to the option tires and DRS. We’re not necessarily the favorites, but we’re going to attack.”

Timo Scheider (34/D), AUTO TEST Audi RS 5 DTM #23 (Audi Sport Team Abt)
•    On a visit to Moscow during the summer break, promoted the DTM race there
•    Won the Audi Sailing Cup with his race engineer Markus Michelberger
“It’s almost incredible that at the Norisring we’re already at the season’s mid-point. I’m looking forward to the race, to the atmosphere between the narrow grandstands and above all to the many Audi fans who are supporting us. We’re traveling to Nuremberg with optimism and are going to give everything to clinch an Audi victory.”

Adrien Tambay (22/F), Audi ultra RS 5 DTM #24 (Audi Sport Team Abt)
•    Has only run once before in a DTM car at the Norisring
•    Just barely missed scoring his first point in the 2013 season at the Lausitzring
“I’m looking forward to the Norisring because it’s not comparable with other race tracks. Before the DTM, I drove there in other racing categories. Even though I scored no points, I had good races at Spielberg and at the Lausitzring. Now the next step can follow: a good race and points!”

All Norisring winners since 2000

2012 flashback: Disappointment for Audi at home round

Following extreme heat on both days of practice and qualifying completely different conditions of rainy weather and cooler temperatures prevailed in Nuremberg on race day, which caused a major commotion right in the first turn. Mattias Ekström was pushed from behind into the car in front and had to park his Red Bull Audi A5 DTM, which had been the fastest Audi during the whole weekend, right after the first lap with a heavily damaged front end. Mike Rockenfeller was one of the few Audi drivers to make it through turn one unharmed but, due to a jammed wheel nut, lost valuable time at the first pit stop and in sixth place was ultimately the best Audi driver.

Jamie Green about the Norisring: “On my first Norisring run I took two pole positions in Formula 3 and in the DTM I’ve won four times in front of this great crowd that always completely fills the grandstand at the start and finish. So obviously I’m getting along quite well there, despite the fact that the Norisring is a pretty strange track that isn’t the most enjoyable one to drive on. There are tracks and turns that are more fun. At the Norisring, it’s mainly about braking, slow turns and driving with little downforce in a way we don’t normally do in the DTM. Because there are only straights and slow turns you can follow the car in front of you more closely than in other DTM races and that’s why duels there are better than in other DTM races.”