Brilliant debut for the new Audi A5 DTM 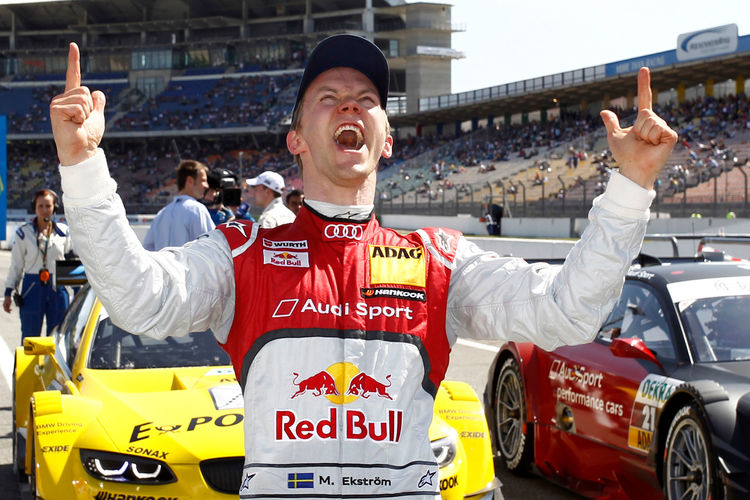 A brilliant and impressive debut for the new Audi A5 DTM: Exactly 274 days after the roll-out of the new DTM vehicle based on the A5 Coupé Mattias Ekström (Audi Sport Team Abt Sportsline) took the pole position at the season opener at Hockenheim in front of Jamie Green (Mercedes-Benz) and Dirk Werner (BMW). Title defender Audi is thus starting into the new DTM era from the top spot on the grid.

Audi, BMW and Mercedes-Benz presented themselves on an equal footing in the first qualifying event of the new DTM right from the first minute on. Accordingly, the three premium manufacturers delivered a thrilling battle for the top positions on the grid which FIA President Jean Todt watched on location as well. In the crucial qualifying segment (Q4) Mattias Ekström prevailed. As temperatures kept rising and grip level was degrading, he clinched the pole position on used tires with a lead of more than two tenths of a second – marking the 19th pole in total in his DTM career and the 65th for Audi.

“I couldn’t have wished for a better start into the new DTM,” jubilated the Swede who, after 2005 and 2009, achieved the best position on the grid at the DTM opener at Hockenheim for the third time. “The first pole position for the A5 DTM on its debut – that’s simply superb! Audi Sport has built a fantastic car. We worked hard and did our homework – that paid off today. This pole belongs to everyone in Audi Sport Team Abt Sportsline. The warmer it became the less grip the track had. That was incredible fun for me. The fact that it was so warm today suited me well.”

A driver of each of the other two Audi factory teams – the Italian Edoardo Mortara (Audi Sport Team Rosberg) and the German Mike Rockenfeller (Audi Sport Team Phoenix) – managed the leap into the top five as well. In Q4, Edoardo Mortara drove the third-best time but it was retroactively canceled because the Italian had crossed a blocked area in turn 1. Mike Rockenfeller in fifth place merely missed Q4 by 69 thousandths of a second.

The two-time DTM Champion Timo Scheider (Germany) is starting into the race on Sunday (broadcast live from 13:40 on “Das Erste”) from position eight. The only 21-year-old Frenchman Adrien Tambay managed an impressive debut by clinching grid position twelve. Filipe Albuquerque, Miguel Molina and Rahel Frey are starting from positions 14, 17 and 22.

“This was an incredibly exciting first qualifying event in the new DTM era,” said Head of Audi Motorsport Dr. Wolfgang Ullrich. “All three manufacturers are on an equal footing right from the beginning, only details are decisive. This is exactly what the fans want. Naturally, it’s great and a reward for the hard labor of the past few months that we clinched the first pole position in the new DTM era with the new Audi A5 DTM and that three of our cars are in the top five. The whole squad performed an almost super-human feat in order to put eight new cars on the grid here. Thank you very much for that! Now we’re all very eager to see the first race in front of such a fantastic crowd!”

Yet before the eagerly awaited race on Sunday, Audi is offering a special treat. On Saturday night, cult sports presenter Waldemar Hartmann together with comedian Matze Knop will provide commentaries on the qualifying action at “Waldi’s DTM Club” at the Audi Team & Media Hospitality at Hockenheim.