​Both Audi cars on third row at Le Mans 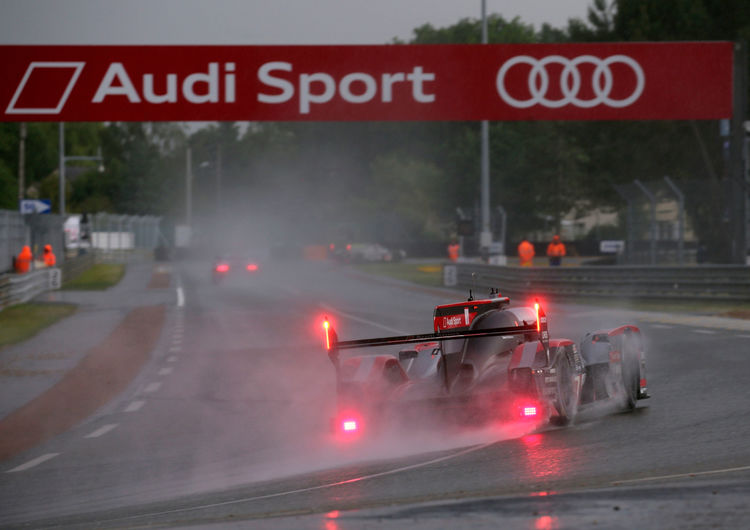 The two Audi R18 cars of Audi Sport Team Joest are going to tackle the 2016 Le Mans 24 Hours from the third row. Changeable weather made for difficult conditions on both qualifying days and a grid of little indicative value.

Partially heavy rain impaired the work of the teams on Wednesday and Thursday. Free practice was interrupted several times and the battle for the best grid positions was marked by numerous yellow flags, slow zones and plenty of rain.

“In these conditions, it was extremely difficult to work out a perfect set-up for the race,” said Head of Audi Motorsport Dr. Wolfgang Ullrich. “But that applies to our competitors as well. We now have to make the best of the data and the information from our drivers.”

The battle for the front grid positions was decided right at the beginning of the first qualifying session on Wednesday night. At that time, the pit crews were working on both Audi R18 cars. André Lotterer subsequently set the fifth-best time of 3m 22.780s. The “sister car” in position six was only 43 thousandths of a second slower.

For Saturday and Sunday better weather with only little rain has been forecast at Le Mans. The 84th running of the iconic French endurance race will be started on Saturday at 15:00 CEST by Hollywood actor Brad Pitt. Action star Jason Statham will be a guest of Audi Sport at Le Mans this weekend and keeping his fingers crossed for the Audi drivers. The TV channel Eurosport will be airing live coverage of the entire race starting at 14:15. At www.audi-motorsport.com and in the new Audi Sport App, live streaming will be available with on-board footage and telemetry data from the two Audi R18 cars.