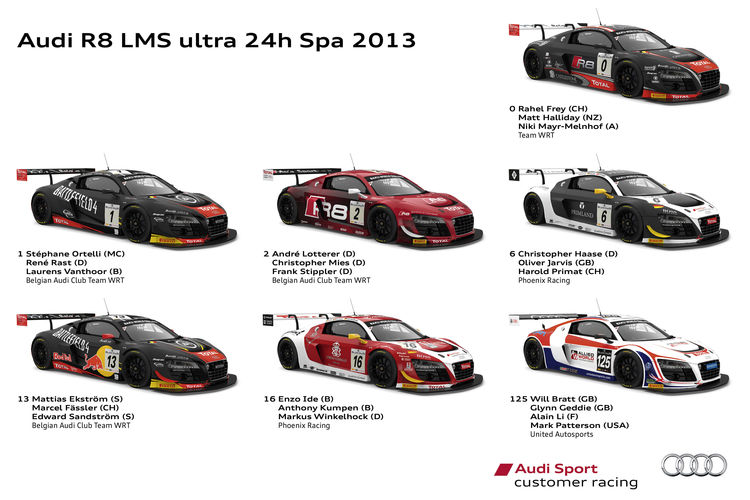 The customers of Audi Sport customer racing are facing an ambitious task. The Spa 24 Hours on July 27 and 28 featuring a field of 70 entrants is regarded as the world’s toughest GT3 race. Following the two victories of the factory teams in 2011 and 2012, the R8 LMS ultra is aiming for its third win in succession.
Download PDF (178 KB)
Facebook
Twitter
LinkedIn
WhatsApp

The customers of Audi Sport customer racing are facing an ambitious task. The Spa 24 Hours on July 27 and 28 featuring a field of 70 entrants is regarded as the world’s toughest GT3 race. Following the two victories of the factory teams in 2011 and 2012, the R8 LMS ultra is aiming for its third win in succession.

Two times three: For Audi, the Spa 24 Hours is about scoring the third victory in succession – plus the third victory in a 24-hour race this year. In 2011 and 2012, the Audi R8 LMS won the iconic event in the Ardennes. And this year, the brand, on winning the GT class at the Daytona 24 Hours with the R8 GRAND-AM and achieving the twelfth overall victory of an Audi sports prototype at the Le Mans 24 Hours, has celebrated two international successes in endurance racing so far.

At Spa, a competition of mammoth proportions is awaiting the teams, as 73 entrants have registered for the fourth round of the Blancpain Endurance Series on July 27 and 28. Nine sports car manufacturers are competing for victory. The intensity of this GT3 competition is unrivaled worldwide. Audi celebrated the first overall victory of its R8 LMS customer sports race car in a 24-hour race at Spa two years ago – fielded by Team WRT, driven by Mattias Ekström and his two team-mates Timo Scheider and Greg Franchi. The two-time DTM Champion Ekström is now returning to the historic venue with WRT, running as the team-mate of his Swedish compatriot Edward Sandström. The third in the trio is Audi factory driver Marcel Fässler, the 2011 and 2012 Le Mans winner. Fässler’s Le Mans team-mate André Lotterer is traveling to the Ardennes as well. The German, who grew up in Belgium, is sharing the number ‘2’ R8 LMS ultra with Blancpain Endurance Champion Christopher Mies and last year’s winner Frank Stippler.

The Belgian WRT squad of Team Director Vincent Vosse is putting two other R8 LMS ultra cars on the grid at its home round. Rahel Frey, as in the other rounds of the Blancpain Endurance Series, is sharing the cockpit of a car designated as number ‘0’ with Matt Halliday and Niki Mayr-Melnhof. Stéphane Ortelli, the winner of last year’s Blancpain Endurance Series, is sharing car number ‘1’ with last year’s winner René Rast and with Laurens Vanthoor.

A seventh Audi R8 LMS ultra will be put on the grid by United Autosports. The Anglo-American privateer team of Richard Dean and Zak Brown is running in the classic race for the fourth consecutive time. In the Pro-Am class, the squad relies on the British drivers Will Bratt and Glynn Geddie, the native Frenchman Alain Li and on Mark Patterson from the United States.

While the fans are watching the race on location along the legendary 7.004-kilometer Ardennes roller-coaster track, viewers at home can look forward to extensive TV coverage this year. The channel Motors TV will air a total of almost 12 hours of direct reports of the action in Belgium. RTL Nitro will carry a 60-minute summary on Sunday night (July 28). Before the Belgian GP, RTL will broadcast another summarized report.

Dr. Wolfgang Ullrich, Head of Audi Motorsport: “This year, Spa will again be the most impressive GT3 race you can imagine. This concept simply works well. Following the two victories we celebrated there, it’s in the hands of our teams this year to clinch a good result for Audi. We’re supporting the commitment with a few factory drivers who enjoy competing in this race. It’ll no doubt be a very thrilling as well as a very tough race.”

Romolo Liebchen, Head of Audi Sport customer racing: “After two consecutive wins, Audi Sport customer racing wishes to support its customers in battling for the third victory at Spa this time. The first three races have shown the magnitude of the current challenge in the Blancpain Endurance Series. Three different marques have won so far, but an Audi team hasn’t been among them yet. The R8 LMS ultra has to compete with an air restrictor that’s significantly smaller than it was a year ago. Thus, our customers have to try and compensate for this disadvantage with factors such as strategy, the shortest possible pit stop times and driving without any mistakes. That poses a huge challenge.”

Rahel Frey, Audi R8 LMS ultra #0 (Belgian Audi Club Team WRT)
“In an endurance race, you need a very reliable car and that’s what the R8 LMS ultra is without the trace of a doubt. In terms of driving, everything’s got to fit too, and my team-mates, Matt Halliday and Niki Mayr-Melnhof, and I complement each other well. The WRT team is a top-caliber squad. I’m now starting at my third 24-hour race. At Le Mans, I was on the grid a few years ago with a private team that retired at an early stage. Two months ago, I ran at the Nürburgring with the Audi race experience but the race was interrupted for nine hours. Now, at Spa, I’m hoping to drive the entire distance for the first time.”

René Rast, Audi R8 LMS ultra #1 (Belgian Audi Club Team WRT)
“A year ago, we won at Spa, that’s why it’s a particularly good feeling to return to this venue. Now I’m running in a slightly different line-up – with the Belgian Audi Club Team WRT that was the winner two years ago and with Stéphane Ortelli and Laurens Vanthoor as team-mates. In the first three rounds of the Blancpain Endurance Series, the three of us have experienced that the ‘grapes are hanging very high on the vine’ this year. Obviously, we’re aiming for a good result. Spa’s the most important GT3 endurance race and our goal is to improve from sixth place in the standings.”

André Lotterer, Audi R8 LMS ultra #2 (Belgian Audi Club Team WRT)
“Spa is my home track because I grew up in Belgium. That’s one of the reasons why I’m happy to compete with the Belgian WRT team of Vincent Vosse. And returning to this race this year in an Audi R8 LMS ultra is fantastic. A year ago, we were very fast but lacking fortune because a rival drove into our car. As a result, we lost twelve laps through no fault of our own. In Frank Stippler and Christopher Mies I’ve got two strong team-mates who’ve won many races in the R8. We’d definitely like to be in contention for the top spot.”

Christopher Haase, Audi R8 LMS ultra #6 (Phoenix Racing)
“The atmosphere at Spa is simply superb. It’s the biggest GT3 race in the world and has its own special attraction – from the field of entrants through to the traditional fireworks at midnight that can even be seen from the cockpit. The track is world-class, the weather keeps causing surprises and more than 70 cars are expected. I believe that we’re in for the most difficult running of this race this year.”

Mattias Ekström, Audi R8 LMS ultra #13 (Belgian Audi Club Team WRT)
“In 2011, we won the Spa 24 Hours with WRT – a victory that really means a lot to me in my career. Now I’m running for the first time with Edward Sandström, whom I’ve known for a long time, and with Marcel Fässler. The R8 LMS ultra is excellent and in the Belgian Audi Club Team WRT we’re backed by a top-caliber squad. We’ve got all the ingredients this year to help us in battling for victory.”

Markus Winkelhock, Audi R8 LMS ultra #16 (Phoenix Racing)
“I must admit that I’m very curious about the race because I’ve never been on the grid of the Spa 24 Hours. My two Belgian team-mates Enzo Ide and Anthony Kumpen have done many laps on this track in their careers. Our test day was positive and Phoenix Racing, as always, is perfectly prepared. I’ve intensified my endurance training by cycling and running and have prepared for the heat by taking saunas.”

Mark Patterson, Audi R8 LMS ultra #125 (United Autosports)
“I’m sure that our Audi R8 in the course of 24 hours has a good chance of being in contention for a podium place in the Pro-Am classification. I’ve been driving for United Autosports ever since the team was formed at the beginning of 2010 and have been on the grid at Spa, Daytona, Abu Dhabi and Bathurst. I feel very comfortable with this squad. Spa is the best track in the world with legendary corners such as Eau Rouge, Pouhon, Stavelot and Blanchimont.”