Audi takes lead in the DTM 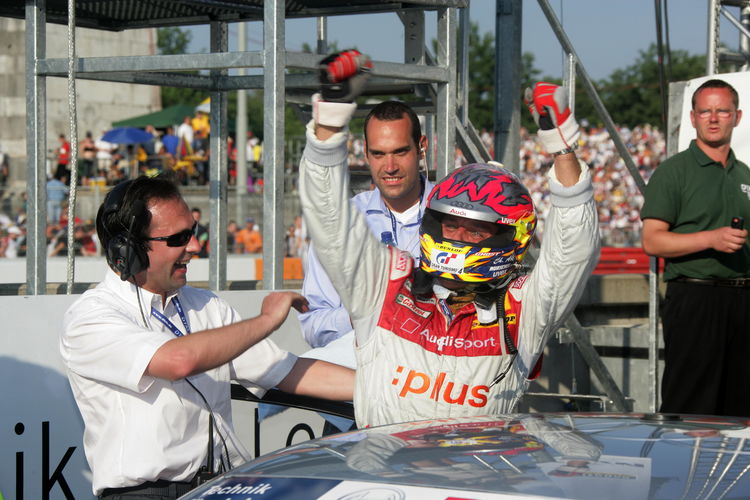 In front of a record turnout of 143,000 spectators at the Norisring Audi has taken the lead in the DTM manufacturers’ standings. In one of the most turbulent races in DTM history with several crashes, spectacular duels, two safety car periods and a high retirement rate, Audi scored points in its “home game” with as many as six cars, thus replacing Mercedes-Benz at the top of the standings. For the fans, the “man of the race” was local hero Christian Abt, who drove forward to second place from 17th on the grid in the Audi A4 DTM entered by Audi Sport Team Joest. Thanks to his first podium position since Donington 2002, Christian Abt is now the best-placed German driver once more in the overall standings.

Title defender Mattias Ekström had excellent chances of defending his lead in the drivers’ standings. However, the Swede from Audi Sport Team Abt Sportsline was spun by a rival in the “Dutzendteich” corner as early as on the sixth of 72 laps. Having dropped back to tenth place, Ekström worked his way forward to third place with his damaged A4 DTM, despite suffering another blow that sent him into a third spectacular spin on the final lap.

Former Formula 1 driver Allan McNish finished in fourth place to claim his best DTM result so far, despite his involvement in a crash on the opening lap. During his first pit stop a new bonnet had to be installed. Like last year, Martin Tomczyk fought his way forward from position 14 on the grid to fifth place. Tom Kristensen and Pierre Kaffer completed Audi’s good result with seventh and eighth places respectively.

Tom Kristensen, who had started from the pole position for the second time in a row, was extremely unfortunate again: at the beginning of the race, the Dane had been fighting for the lead with the subsequent victor, Gary Paffet, when an early safety car period upset the team’s strategy. While most of the drivers made their two pit stops during the safety car periods, Kristensen had to pit for his second tyre change in normal race conditions.

For Frank Stippler and Rinaldo Capello, the turbulent Norisring race ended prematurely: after the start, Stippler was in ninth place when he was pushed into the guard rail by a rival. The impact damaged the gearbox of his Audi A4 DTM. In his first race at the Norisring, Rinaldo Capello was in seventh place before sliding backwards into the wall in the chicane, which forced him to retire.

Christian Abt (Audi Sport Team Joest Racing #14)
2nd place, + 3.627s
“Of course I’m absolutely elated about driving forward to second place from 17th on the grid. But I knew as early as yesterday that our grid position did not reflect our true potential. This podium position is a nice reward for all the hard work done by my team. Of course the chaotic conditions in the race ‘flushed’ me forward, but the conditions were the same for everyone. In the closing phase Mattias (Ekström) came closer, and I ‘opened the door’ for him several times. But I couldn’t drive any slower, because if you do that at the Norisring, you’ll have not only one, but several, cars drive past you.”

Mattias Ekström (Audi Sport Team Abt Sportsline #1)
3rd place, + 6.269s
“That was definitely a turbulent race. If you’re sent into a spin two and a half times and still manage to capture a podium position with a heavily damaged car, that’s surely something special. I’m happy about my six points for third place, because normally you go home without any points after such a race. Today we showed that we stand our ground even if the going gets a little tougher than usual. And I believe that this will be necessary in the upcoming races as well.”

Allan McNish (Audi Sport Team Abt #6)
4th place, + 13.251s
“An incredible race. I really couldn’t believe it when they told me that I finished in fourth place. I had a good start but then was pushed into Heinz-Harald Frentzen’s car by another driver. He spun and blocked me. On top of that, my suspension was damaged in the incident, and the bonnet flew off. I was glad about being able to continue driving at all. With good stops, the team then put me into an outstanding position, where I was able to fight for better places.”

Martin Tomczyk (Audi Sport Team Abt Sportsline #2)
5th place, + 13.615s
“In the beginning, the race was a bit chaotic. After the first safety car period, things were going very well for me, I was able to make up a lot of places. But a misunderstanding in the pit lane caused me to have to make an extra refuelling stop. Consequently, the race on the whole didn’t go all that well for me.”

Tom Kristensen (Audi Sport Team Abt #5)
7th place, + 21.917s
“The first safety car period destroyed my race. When I received the radio message, I had – like Gary Paffett – already passed the pit lane entrance. This made our whole strategy go awry. It was frustrating to be leading for such a long time, knowing that I had no chance of winning. Seventh place is a meagre result when you start from the pole position. Yet I’m still third in the Championship, and I’ll continue fighting.”

Pierre Kaffer (Audi Sport Team Joest Racing #15)
8th place, + 23.310s
“An overwhelming result for our team. I don’t think anyone would have predicted Christian finishing in second place and I – with lots of luck in the end – in eighth. In the test sessions things were going well, but then there was some kind of a drop. Of course we weren’t satisfied with my last but one grid position. I do think though that I’ve been able to pay something back to my boys in the race today. In the end, I helped Tom to score an additional point, and I hope that this will contribute to Audi being at the very front at the end of the season.”

Rinaldo Capello (Audi Sport Team Joest #18)
Retired (accident)
“Needless to say, I’m very disappointed, because I could have scored my first DTM points today. I was already in seventh place when the accident happened. I didn’t drive faster in the chicane than on the previous lap, but suddenly the rear of the car went out of control. I crashed into the wall backwards, and that was the end of my race.”

Frank Stippler (Audi Sport Team Joest #19)
Retired (gearbox)
“The start hadn’t been all that good, but I was able to push forward to ninth place while braking into the first corner. Unfortunately, my gearbox was damaged later in a crash, which meant I was no longer able to use second gear. And that finished the race for me.”

Hans-Jürgen Abt (Team Director Audi Sport Team Abt Sportsline): “The spectators have witnessed an incredibly thrilling race. Of course we could have even done a little better than we did, but the safety car phases and the unfair behaviour of some of the drivers prevented this. Although Mattias was sent into a spin several times, he still finished in third place. That’s great! The knock-out on the final lap was unnecessary. Nevertheless: now we’re happy about Audi having taken the lead in the manufacturers’ standings and the fact that we’re in a good position in the drivers’ standings as well.”

Ralf Jüttner (Technical Director Audi Sport Team Joest): “This was the most action-packed DTM race I’ve ever seen. During the safety car periods we did everything right and managed to put our drivers in good places because of our pit stops. This has made it possible for Christian to clinch a podium position as well. He did a great job of using his tyres. He deserves great praise for staying in front so well with last year’s car. He didn’t make a single mistake. I hope that Mattias won’t be lacking the points in the end – but he’s such a strong driver, he’ll manage in spite of this.”

Dr Wolfgang Ullrich (Head of Audi Motorsport): “On the whole, we can be satisfied with the weekend. In qualifying we clinched the pole position, and in the race, second and third places. At the Norisring, this is a good result for us. It was a very tough race with lots of trials and tribulations. During the course of the race, Mattias Ekström was spun several times and still made it to the podium. Clinching second place with a car from last year shows what’s possible in the DTM if everything fits together. Of course the two safety car phases helped a bit. Although Mattias has lost the lead in the drivers’ standings, we’re now at the top of the manufacturers’ standings. A year ago we were in a worse position at the Norisring – so I’m looking ahead with optimism.”