Audi starts to DTM finale from grid position one 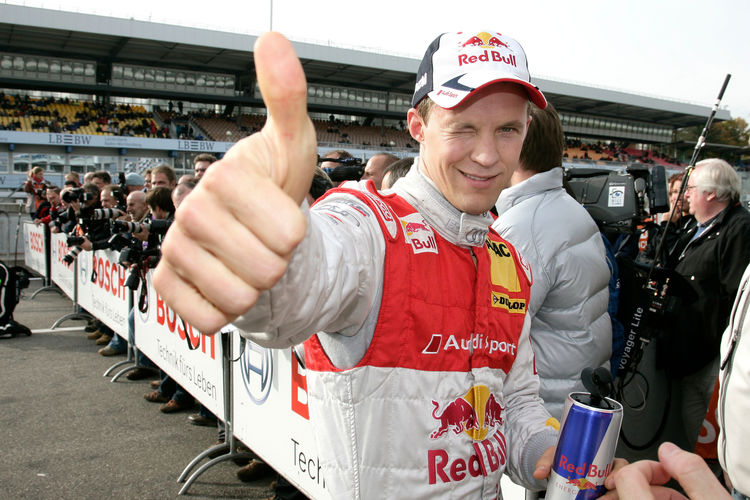 Audi will also start to the finale of the 2009 DTM from grid position one. For the eighth time, in the tenth race, an Audi A4 DTM took the pole position. For the third consecutive time, the Swede Mattias Ekström will start from the top slot on the grid at the Hockenheimring. Leader of the standings Timo Scheider, in third place, put himself in a position to successfully defend his DTM title on Sunday.

As at the season opener in May, Mattias Ekström was again the dominant driver at the last DTM qualifying of the year. After setting the fastest time in the morning’s free practice the Swede was the front runner in three of the four qualifying sections. With a new record time of 1m 31.894s in Q3, he was the first and so far only DTM driver to ever post a time below 1m 32s at the Hockenheimring. In the crucial shoot-out for the top four grid positions he kept Gary Paffett, Timo Scheider and Paul Di Resta at bay despite the fact that Ekström did not manage an optimal lap. “But my Audi A4 DTM was simply perfect today,” said the Swede. “It was fantastic to drive. Tomorrow I want to finally celebrate my first victory of the season – only then will I be happy. And I’d even be happier if Timo (Scheider) clinched the title at the same time.”

The leader of the standings was only 22 thousandths of a second slower than his rival for the title Gary Paffett, who will start to the finale trailing Scheider with a seven-point gap. “For me, it was about not losing sight of Gary – and I managed doing that,” commented the Audi driver. “I can definitely live with third place. It would only have been bad to find myself on the fifth or sixth row. Now, like in 2008, we’re on position three. Last year, this position brought me the title. I’m hoping that tomorrow it will too.”

Tom Kristensen could have made it into the fourth qualifying segment as well but felt confused by Gary Paffett in the finish turn when Paffet turned into the pit lane, and lost the crucial tenths of a second in the process. On Sunday, the Dane will start to his 60th and last DTM race from position five. Starting alongside Kristensen will be Oliver Jarvis as the best driver of a year-old A4.

With five Audi A4 DTM cars on the top seven grid positions, Audi has a good starting base for the race on Sunday (starting at 1:45 pm – local time – on “Das Erste”). “We saw a really fantastic total team performance,” said Head of Audi Motorsport Dr. Wolfgang Ullrich. “It’s nice being able to start to the finale from the top grid position. Mattias (Ekström) was very strong today. And Timo (Scheider) in third place is in a good position. But nothing has been decided yet. We know how close things are in the DTM and that everything has to work perfectly tomorrow in the race too. The two drivers who are fighting for the title are directly together on the grid. This means that the fans can look forward to a gripping race.”