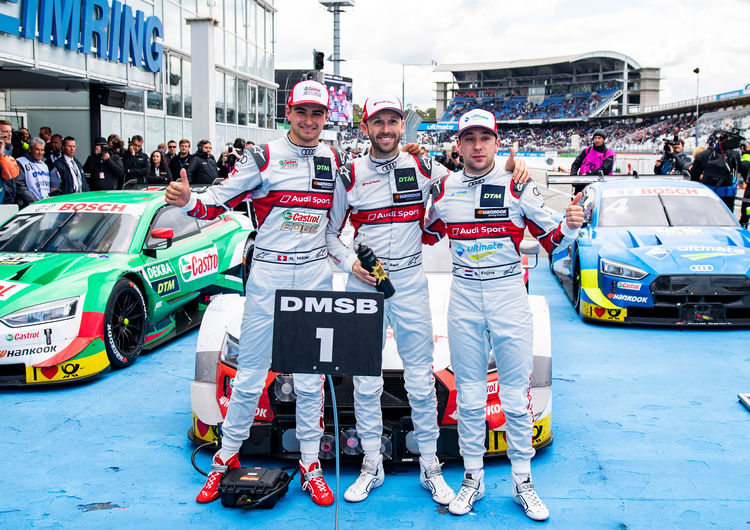 Zero points a year ago, 53 points on two days and the lead of the teams’ classification this time: Audi Sport Team Abt Sportsline managed a good start to the new DTM season at the Hockenheimring.

“With three podiums, this has been a strong opener for us,” says Thomas Biermaier, Sport Director of ABT Sportsline. “Congrats to both drivers and congrats to the team that worked extremely hard and did three really good pit stops. We can build on this.”

The strong showing at Hockenheim began with a best time set by Nico Müller in the first free practice session on Friday. Accordingly, the Swiss was disappointed when he had to settle for tenth position on the grid in the rain on Saturday and eighth in the first of the two races. “Fortunately, I was able to provide exactly the right response on Sunday and in second place score a podium finish,” said the Swiss. “With three Audi drivers on podium, it was a great day for Audi and a great day for ABT.”

Müller pulled off a lightning start on Sunday with which he improved from fourth to second position. Subsequently, he had to let René Rast pass, who drove to victory with a bold two-stop strategy, but Müller decided the duel against BMW driver Philipp Eng for second place in his favor, also thanks to a faster pit stop of his team.

Robin Frijns crossed the finish line in third position just 0.262 seconds behind his teammate – after second place in Saturday’s wet race marking the second consecutive podium for the Audi driver. While on Saturday he improved at the start from fifth to second, Frijns on Sunday, following his so far best DTM qualifying, initially dropped from third to seventh place. “I first had to fight back – also after having lost some time at the pit stop,” says Frijns. “The car was really good. My thanks go to Audi and to the ABT guys. I wouldn’t mind if things continued this way.”

Before his “home round” at Zolder, Belgium, on May 18/19, Frijns is in second place of the drivers’ standings, just three points short of BMW driver Marco Wittmann.