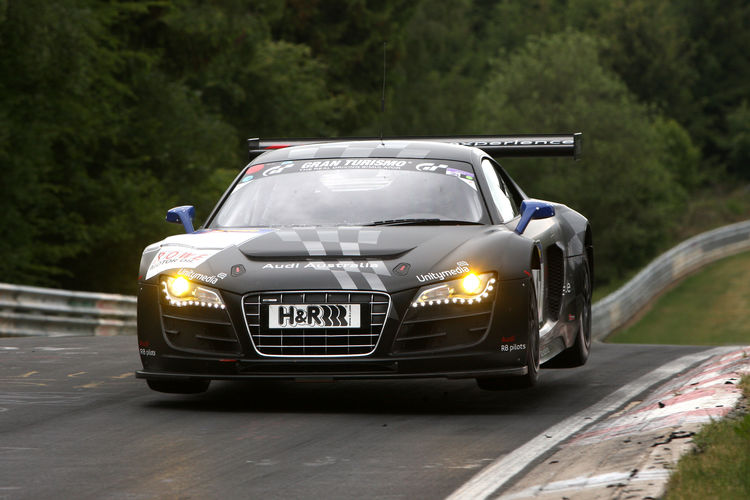 Audi is not only represented at the 24-hour race around the Nürburgring by its four factory backed Audi R8 LMS sports cars fielded by the Audi Sport teams Abt and Phoenix next weekend. Four more race cars of the brand underline the endurance program’s customer racing alignment: the Audi race experience fields two R8 LMS while Raeder Motorsport brings two Audi TT RS to the grid as a test race for the first time.

Two fascinating premieres: for the first time the Audi race experience realizes a dream for customers to contest the endurance race of the year at the Nürburgring in the R8 LMS. The 200,000 fans expected to attend will also see the R8 LMS sports car’s ‘smaller brother’ - the TT RS - for the first time in a 24-hour race. Raeder Motorsport fields two of the coupés. The TT RS is tested by Audi Sport with a view to the possible expansion of its customer racing program.

“I’m delighted about the level of enthusiasm that our race cars generate among the customers,” says Romolo Liebchen, Head of Customer Racing activities at quattro GmbH. “We provide the Audi race experience and team Raeder Motorsport, as we also do all other customers, with models thoroughly developed on a global scale to operate successfully in motorsport. As a result, the teams have a great chance of successfully withstanding an endurance test like the 24 hours Nürburgring.”

After the Audi race experience contested VLN endurance championship races since 2010, it now tackles the 24 hours Nürburgring for the first time. No less than six private customers have accepted the challenge. The Audi R8 LMS with start number “28” is shared by Christian Bollrath from Löhne, Managing Director of the US subsidiary of a German light manufacturer, John Barker, journalist for a British car magazine and Rudi Speich from Linz, engineering firm owner and President of a motorsport club. They are supported by Rösrath based professional race driver Frank Schmickler who won the 24 hours Nürburgring in 1990.

The sister car with start number “29” is driven by former Audi employee Chris Vogler from Heilbronn who is now co-owner of a software company, Wolfgang Dess from Schweig, who raced last year with the Audi race experience and owns an engineering firm, and real-estate salesman Emin Akata from Friedrichshafen. Supporting them is young talent Florian Gruber from Aham. He is also an Audi race experience instructor like Frank Schmickler.

“Our program is attractive and has proved very popular,” says a happy Manfred Jantke who is Team Manager for the Audi race experience since the start of this year. “A dream will come true for customers. With the near 387 kW (527 hp) powerful Audi R8 LMS they have a formidable and proven car for the difficult track. At the same they have the chance of working together with our professionals and in doing so experience a wonderful and successful motorsport weekend.”

Raeder Motorsport faces a completely different task. The team around Managing Directors Martin and Nicolas Raeder tests the Audi TT RS developed in co-operation with quattro GmbH in racing conditions with professional drivers. While the Audi R8 LMS fights in one of the leading classes in the race (SP 9), for the Audi TT RS on its 24-hour debut it is all about the win in the SP 4T class for modified production cars and about proving its reliability. In the VLN races held prior to the 24 hours Nürburgring the TT RS proved as David that it is capable of challenging several Goliaths in the race: the near 280 kW (380 hp) powerful, front wheel driven race car finished among the top 15 several times in the fiercely contested field.

In the same way as the Audi R8 LMS, Audi Sport customer racing has successfully tested the smaller coupé in endurance runs and used synergies within the group in the process - such as joint testing opportunities. Like all Audi R8 LMS sports cars the TT RS is also equipped with Michelin tires and its “bigger brother’s” new safety seat system. The two cockpits are shared by experienced professionals. Five-time Le Mans winner Frank Biela from Neuss races car number “125” with Audi factory driver and DTM championship leader Martin Tomczyk (Rosenheim) as well as the ADAC GT Masters drivers Jens Klingmann (Leimen) and Michael Ammermüller (Pocking). The Audi TT RS with number “126” is driven by the Swede Jimmy Johansson and Audi factory driver Miguel Molina from Spain. They share the task with Christian Hohenadel from Quierschied and the Italian Andrea Piccini who both currently hold third place in the FIA GT1 World Championship. Furthermore, Piccini was nominated as reserve driver for Audi Sport Team Phoenix.

The Audi customer teams at the 24 hours Nürburgring

The Audi development teams at the 24 hours Nürburgring