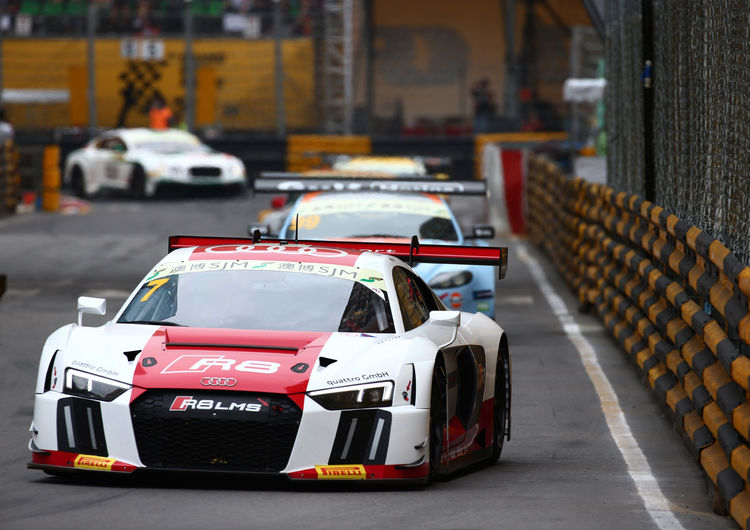 Second place for Tom Kristensen in Race of Champions

Strong showing by Tom Kristensen in the Race of Champions held at London’s former Olympic Stadium. In the individual classification, the nine-time Le Mans winner reached the finale for the fourth time and ultimately took second place. In the final session, Kristensen only had to admit defeat to four-time Formula One World Champion Sebastian Vettel.

Tom Kristensen attended the presentation of the new Audi R8* in North America. Audi of America exclusively presented the high-performance sports car to selected dealers and VIP customers on the eve of the Los Angeles Auto Show. At Smashbox Studios in Culver City near Los Angeles, the 175 guests were provided with insight and information on the details of the sports car that delivers up to 610 hp by Tom Kristensen, Stephan Reil, Head of Development of quattro GmbH, Scott Keogh, President of Audi of America, and Vice President Mark del Rosso.

Following the finale of the FIA World Endurance Championship (WEC), Richie Stanaway participated in the rookie test initiated by the FIA WEC. The New Zealander was allowed to drive the Audi R18 e-tron quattro in Bahrain on Sunday. “An awesome opportunity that was incredible fun for me,” beamed the up-and-coming driver, who started out in single-seater racing and is now driving a GT sports car in the FIA WEC: “A huge thank you to Audi and to the FIA WEC for this wonderful chance.” Stanaway completed 63 laps at Bahrain International Circuit. Justin Taylor, who is normally responsible for Audi drivers Lucas di Grassi/Loïc Duval/Oliver Jarvis, was assigned as the New Zealander’s engineer in the test. Audi driver Benoît Tréluyer, who had instructed Stanaway in operating the LMP1 race car and had previously been on hand during the seat fitting in Neuburg, supported the test on Sunday as well.

At the WEC finale in Bahrain, Audi said farewell to the long-standing Michelin employee Serge Montorier who is retiring. Team boss Ralf Jüttner presented the Frenchman with a signed Audi R18 e-tron quattro model car and a jersey. The tire technician has been working for the French manufacturer since 1976 and in the field of motorsport since 1984. “At Michelin, I took care of Audi as far back as in the World Rally Championship,” the 59-year old Frenchman recalls. “That was an unforgettable era. But I wouldn’t have missed the great era of sports car racing for the world either. Not only Michelin, but Audi too, has been like a family to me.” Montorier has been advising Audi for many years at Le Mans and has been involved in the WEC sports car program since 2012. In 2016, he will work for the very last time at a motor race and fittingly at the 24 Hours of Le Mans.

Audi is flying the flag

The pair of Audi R18 e-tron quattro race cars were flying unusual flags at the FIA WEC World Endurance Championship finale, with the French colors adorning the front splitter. In sporting the ‘Tricolor,’ Audi was showing its solidarity with the French neighbors following the Paris events.

Sweet surprise for André Lotterer in Bahrain: On Thursday at the FIA WEC World Endurance Championship finale, the Audi driver celebrated his 34th birthday. Ralf Jüttner, team boss of Audi Sport Team Joest, presented the three-time Le Mans winner with a big birthday cake on behalf of the whole team in the pits.

Nico Müller crossed his fingers for his Audi brand colleagues at the season finale of the FIA World Endurance Championship in Bahrain. The Swiss, who drove in the DTM for Audi Sport Team Rosberg and won the 24-hour race at the Nürburgring in a new Audi R8 LMS this year, was very impressed. “It was very interesting to see the World Endurance Championship from behind the scenes,” said the 23-year-old. “In 2012, I competed in a support race at Silverstone during the WEC weekend, but I did not have the chance to witness the WEC in detail. This weekend has been a terrific experience.”

The application stage for the Audi Sport TT Cup has been completed. 125 applications from 36 nations have been received by the officials of the Audi one-make cup. “The strong global interest proves that the Audi Sport TT Cup celebrated a very successful premiere this year,” says Rolf Michl. The project leader and his team are now spoiled for choice. “I’m convinced that next year we’re again going to have a great mix of familiar and new faces from numerous nations in the cup.” At the beginning of December, an evaluation course for the best applicants will be held at Vallelunga, Italy, followed by the selection of the 20 permanent entrants for the second season of the Audi Sport TT Cup.

In appreciation for the work done during the season, Audi DTM driver Nico Müller invited his pit crew from Audi Sport Team Rosberg to his ‘home’ kart track in Lass, Switzerland. On board of real race karts, the mechanics had the chance to prove their knack for speed not only when it comes to using wrenches. “It was really great, tremendous fun – and everyone remained safe and sound,” Müller reported. In addition, the 23-year-old racing pro proved that his heart is in the right place at the end-of-season session of the series of events billed as ‘Nico’s Race Lounge.’ There, Müller presented a check for CHF2,500 to PluSport, the parasports umbrella organization in Switzerland.