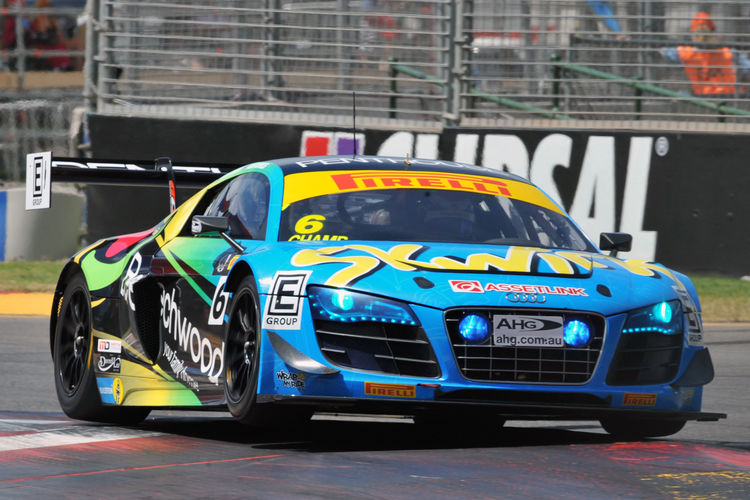 Audi privateer driver Nathan Antunes won two races in the opening round of the Australian GT Championship and in doing so took the championship lead.

Top weekend for Audi in Adelaide

On the road to success in the Australian GT Championship: the Australian Nathan Antunes took two victories and a third place in the three races to head the overall standings by 48 points in his Audi R8 LMS ultra. In addition, he became the first Audi driver ever to win two consecutive races in the history of the championship. Peter Fitzgerald added a third place to the results tally. In the Trophy category, another Audi driver also won a race – Greg Taylor who now leads the trophy table.

Athletic summit in Neuburg: Head of Audi Motorsport Dr. Wolfgang Ullrich welcomed players, coaches and physios of the German Ice Hockey Champion ERC Ingolstadt on the occasion of a visit to the new Competence Center Motorsport. The two Audi DTM stars Mike Rockenfeller and Miguel Molina let the athletes take a peek behind the scenes of the motorsport department that is currently preparing the race cars for the DTM and the Le Mans 24 Hours. Subsequently, the ‘panthers’ did a few laps on a handling and an off-road course.

Mattias Ekström thrilled numerous winter athletes with his Audi S1 EKS RX quattro at the Nordic Ski World Championships in Falun. Just one day following the world championship title win in the mixed team event of the ski jumpers, the DSV athletes Richard Freitag, Carina Vogt and Katharina Althaus sat in the passenger’s seat of the 560-hp rallycross race car. At the event of the Audi driving experience the DTM driver did a few fast laps on the snow and ice course in his native Sweden with his prominent passengers and impressed them with his driving skills.

Besides increasing the number of races per weekend from one to two, the DTM is starting the 2015 season with another change. For the first time, the drivers are allowed to select the numbers for their race cars themselves and can continue to use them in the coming years as well. Mattias Ekström has selected #5 for his Audi RS 5 DTM, while Timo Scheider will be competing in #10. Miguel Molina and Adrien Tambay are going to contest the 18 races of the season with #17 and #27 as their numbers of choice. Edoardo Mortara, Nico Müller and Jamie Green will be driving cars #48, #51 and #53. The highest car number in the 24-strong driver field has been secured by Mike Rockenfeller for his Audi RS 5 DTM. The champion of the 2013 season will be competing in car #99. “9 has always been a good number for me, so I thought that with a double 9 nothing can go wrong,” ‘Rocky’ reckons.

Audi-Team on the grid in Thailand

In the 2015 season, the Audi R8 LMS will be competing in racing events held in various Asian countries. The first privateer driver to have announced his program is Henk Kiks, who will be putting the GT3 race car on the grid of the Thailand Super Series this year. The Dutchman is going to compete for Team B-Quik Racing in two single races to be held on each of four race weekends. “We’ll be racing twice on the Buriram race track that suits the Audi R8 LMS well,” says Henk Kiks. “That’s why we’re hopeful of having good chances in the battle for the title.”

Audi legend Allan McNish has received a prestigious accolade in his native Britain. The 2013 FIA WEC World Endurance Racing Champion was presented with the Gold Medal of the British Automobile Racing Club (BARC). The 45-year-old Scotsman personally accepted the award in recognition of his outstanding career in Kenilworth near Coventry. On receiving this accolade McNish has joined the list of renowned racers having been honored by the club including, among others, the Formula One World Champions Lewis Hamilton, Damon Hill, Jack Brabham and Jacky Stewart.


A word from ... Edoardo Mortara

You will visit the Geneva Motor Show for Audi, at which the new Audi R8* will be unveiled. Is it a special appointment for you?

Of course. I’m really looking forward to it. I come from Geneva, so it’s a sort of home fixture for me. The event is one of the most important motor shows worldwide. Audi unveils its new high-performance sportscar there – it’s also interesting for me to see this new generation for the first time. On top of this comes the fact that I have a special relationship with the R8, because at the annual street race in Macau I have contested some fascinating races in the R8 LMS and won three times in succession.

The DTM season starts in May. How did you prepare for your fifth season and what are your goals?

As always, my physical fitness was the focus. I kept up my fitness workload and the Audi winter camp was on the agenda in February. I feel well prepared. While I was on holiday in Thailand over the winter, I was able to switch off completely and recharge the batteries. I’ll be perfectly honest about my ambitions: In 2015, I intend to fulfil the goals from 2014 that I should have achieved in 2013, because in 2012 I made a promise about what I’d already thought about in 2011.

Before the races begin, you still have a rather unusual PR appointment in your calendar.

It still a bit of a secret. However, at the end of March, I’ll be involved in a very spectacular event in Dubai with an Audi. Something I’ve never done before. It won’t just be about cars, but also an acrobatic element. Wait and see!