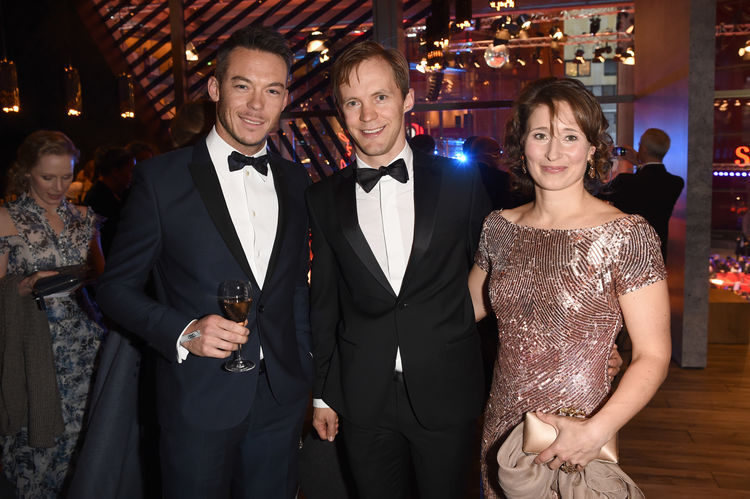 Audi’s WEC and DTM drivers are using the winter break for off-track activities.

Ekström and Lotterer at Berlinale

Two Audi drivers visited one of the world’s most famous film festivals. Mattias Ekström and André Lotterer walked across the red carpet at the 66th Berlinale on Thursday and were guests at the opening event featuring the world premiere of a film. At the Audi Berlinale Lounge, the two race drivers met with Audi’s VIP guests and concluded the day with a dinner on the opening night.

DTM Champions as driving instructors on snow and ice

14 readers of “Sport Bild” magazine had an unforgettable day at the Audi driving experience in Saalbach, Austria. The winners of a contest experienced the 367-hp Audi RS 3 Sportback* on snow and ice as passengers of the two DTM Champions Mattias Ekström and Timo Scheider. Under the guidance of Chief Instructor Sepp Haider, they were subsequently allowed to take the wheel of an Audi S5* themselves. “A cool event with lots of fun for the readers, as well as for us,” the two Audi DTM stars unanimously said.

Nicolaj Møller Madsen is one of the first drivers from the Audi Sport TT Cup to be promoted. The Dane finished Audi’s one-make cup as the overall runner-up in its 2015 inaugural season. Now, the 22-year-old talent from Odense has signed an agreement with Phoenix Racing. Møller Madsen will be promoted to the Blancpain Sprint Series, one of the most important European racing series for GT3 sports cars, where he will be driving an Audi R8 LMS from Ernst Moser’s team.

With four victories and second place in the drivers’ classification Jamie Green was the most successful Audi driver in the DTM last year. The Briton about the preparations for the new season and his expectations.

At the end of February, at a test in Spain, you’ll be sitting in the cockpit of the Audi RS 5 DTM again for the first time since the finale of the 2015 season – that’s a pretty long time, isn’t it?

I’ve been in the DTM for many years and am used to not getting to drive a lot aside from the race weekends. Not sitting in the car from October to February is definitely a long time. But that’s no problem for me. I even think it’s good to step back from racing for a few months in winter. It gives you time to recharge your batteries and keeps you fresh and motivated. When we start again at Hockenheim in May, I’ll no doubt be really hungry for racing again.

This year, there will only be two pre-season tests: the manufacturers’ test at Monteblanco and an ITR test at Hockenheim.

In the DTM, we have phases like this in which the technical development of the cars has been frozen and testing is limited. I don’t mind that because my performance apparently doesn’t suffer from this. Still, it’s great for me to participate in both tests this year. Five days in the car pre-season – for DTM conditions that’s quite a lot.

That’s hard to say. A year ago, the technology of the cars was frozen as well – but in spite of this, BMW was surprisingly slow after Marco Wittmann had won the championship in the previous season. Who’d have expected that? In the DTM, there’s simply nothing that’s guaranteed. It’s clear that we had a very good car last year and didn’t clinch the drivers’ and the manufacturers’ titles only due to a lot of misfortune. Our speed was right. We’re hoping for that to be the case again this year. Mercedes will be competing with a slightly different bodywork. So, there’s a possibility that the balance of power may be shifting a little as a result. For me, personally, it’s important that my environment remains the same. At Audi Sport Team Rosberg, I’m working with the same engineer and the same mechanics. We’re a strong, small squad that has faith in itself and where everyone trusts each other. It’s good that we’re continuing to work together and hopefully will be taking our good momentum from last year into the new season.

But in Adrien Tambay you’re going to have a new teammate. What does that mean for you?

Adrien has been driving for Audi in the DTM for quite some time. Even though we haven’t been teammates up to now, we know each other well. We get along with each other very well. He’s a fast driver and a youngster. I’m a little older and more experienced. I think from Rosberg’s perspective, that’s a good mix. That was the case with Nico (Müller) as well. For me, nothing will change. I’ll have a young, fast teammate again who’s going to make life difficult for me here and there. That’s part of the challenge I enjoy.